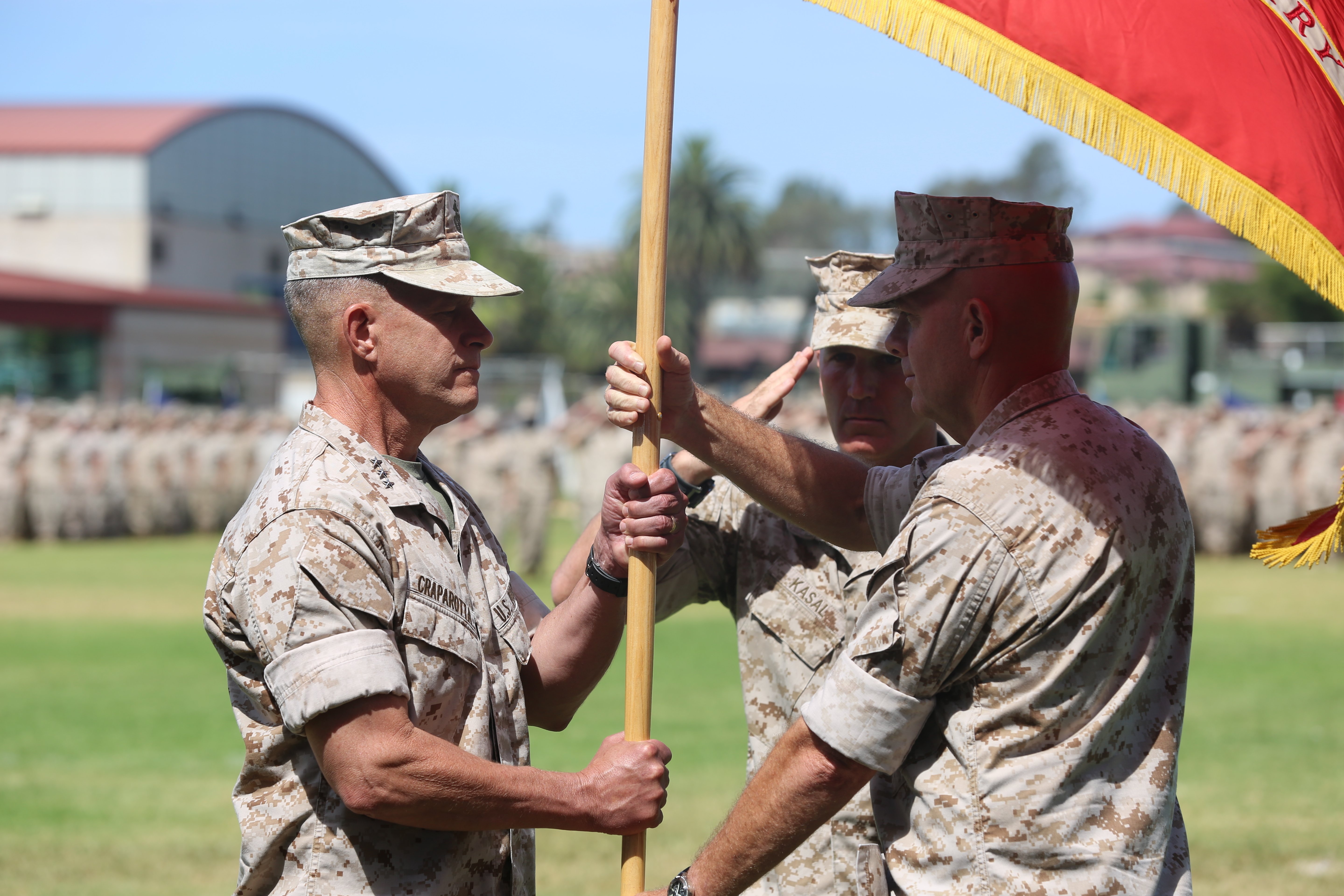 The command turnover, witnessed by the commandant, Gen. Robert Neller, and a large contingent of general officers and retired commanders, comes at a busy time for MARFORPAC and I MEF.

Both commands are in the midst of major training events notably the multinational 2016 Rim-of-the-Pacific naval and maritime exercise in Hawaii that, for the first time, includes a busy Southern California component as several international countries including Mexico, Chile and Canada train with Marines and sailors.

As many as 10,000 Marines from I MEF units are deployed for training, presence and operations in various theaters including in the Middle East. They are among some 37,000 Marines currently deployed worldwide today who, as Neller said, “assure our friends and they deter our adversaries.”

Berger, who will take the helm of Marine Corps Forces Pacific in Hawaii, led I MEF when former commandant Gen. Joseph Dunford tasked the force with taking the Marine Corps’ lead as the primary, principal MEF warfighter. Dunford, in his planning guidance, wanted I MEF to focus on maintaining “proficiency in major operations and campaigns,” as well as provide forces to meet the global demand.

So Berger ordered up training exercises and drills that included more realism and scenarios with near-peer, credible threats and more disruptions meant to push and challenge him and his staff and commanders to tackle issues like outer facility security, network breaches and loss of communications as it refocuses on conducting high-end, major combat operations in the uncertainty of future operations and a high-tech threat environment. “He’s the one who first turned off SIPRNet, turned off the network and said, OK, what are we going to do now?” Neller said. He’s shared those lessons “and made the Marine Corps a better warfighting organization, which at the end of the day is what we’re all about.”

And I MEF will remain focused on the Pacific and the Middle East. “There are different problems, different crises” in each theater, Berger said, speaking with USNI News with Craparotta following the ceremony. “His challenge, as mine, is: Can you be prepared, like the commandant said, to deploy anywhere in the world against any kind of threat, from small to big? We have a broad spectrum of challenges that we have to prepare for.”

Craparotta, for his part, kept his remarks brief. “I’m the new guy,” he quipped during the hour-long ceremony. But I MEF is very familiar ground: The veteran infantry officer, who also had led 2nd Marine Division (Forward) in Afghanistan, has commanded several units including 1st Marine Regiment and most recently headed the Corps’ premier Marine Air-Ground Task Force Training Center ground at Twentynine Palms, Calif. That recent posting positions him well for leading the MEF, he said, adding ” I know where the commandant wants us to go so we can leverage those and get some great opportunities.”

Berger is heading west, replacing Toolan at the helm of MARFORPAC, headquartered at Camp H.M. Smith in Hawaii. Toolan, in his ceremony remarks, addressed the more than 800 Marines representing I MEF’s subordinate units in formation on the large parade field at Camp Pendleton’s mainside headquarters area. “You’re doing a great job in the Pacific today as we look to strengthen our security posture in the Pacific, as well as take care of ISIS/ISIL in the other part of the world,” he said. “You’re doing a great job. Keep up the good work.” Toolan, who preceded Berger as I MEF commander, will be retiring to end a 40-year military career.