More than 70 years after the cruiser USS Indianapolis (CA-35) was sunk, a new clue discovered by a Navy researcher could give expeditions hunting for the missing ship a better location to look, the service said this week.

Searchers have looked for Indianapolis since the ship was sunk by Japanese submarine I-58 on July 30, 1945 shortly after delivering components for the atomic bomb Little Boy to the island Tinian. Of more than thousand men aboard, almost 800 survived the initial sinking but only about 320 survived days of exposure and shark attacks on the open ocean.

Since the sinking many have tried to find the ship and none have succeeded.

Now, Naval History and Heritage Command researcher Richard Hulver unearthed a log entry from the amphibious landing ship USS LST-779 which helped pinpoint time and location of Indianapolis only 11 hours before the ship was sunk by Japanese submarine I-58 on July 30, 1945.

According to the command, the information from LST-779’s log – which past the ship before a pair torpedoes at the close of the war sank it — can provide searchers with a more specific location to look for the missing cruiser. 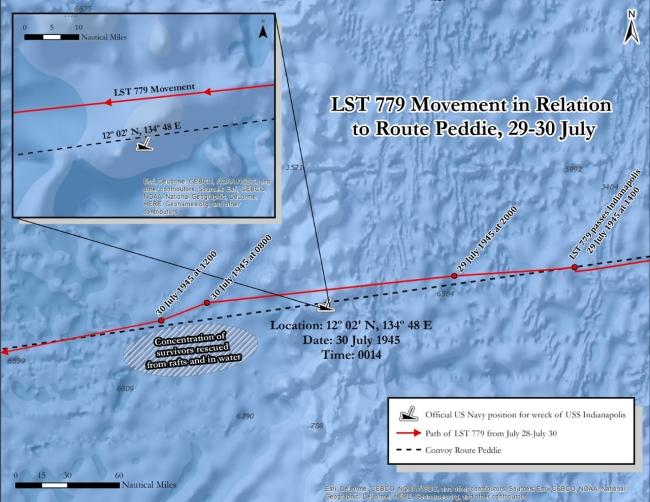 “LST–779 traversed the same waters at the same time, recording specific information about weather and sea conditions. The deck logs make it possible to better understand exactly what natural circumstances Indianapolis encountered— new data that can help researchers better determine where Indianapolis would have been when torpedoed and how survivors in the water would have been at the mercy of the movement of the sea, wrote Hulver in an analysis of the new information published by NHHC.

The new revelation comes as a new expedition is mounting to find the ship, led by National Geographic.

Sarah Vladic, director of the documentary USS Indianapolis: The Legacy who is assisting with the National Geographic project, told USNI News the expedition to find the wreck of the ship will take place in the spring of 2017 but didn’t provide more details.

Expeditions have attempted to locate the ship most recently in 2001 and 2005.

“Teams have tried to find Indianapolis in the past, but failed, partly because she is over two miles down, but also because they were looking in the wrong place,” wrote Hulver in an analysis of the new information published by NHHC.
“Historical records specifying the sinking location do not exist, as no distress signal providing the location of Indianapolis was received. Allied intelligence recovered I-58’s message to Tokyo confirming the kill, but failed to identify a specific ship or recover the position given by the Japanese.”

Interest in the story of Indianapolis has risen in the last few years. In addition to the National Geographic search, a new film on the story of the crew – USS Indianapolis: Men of Courage – is set to release in September.