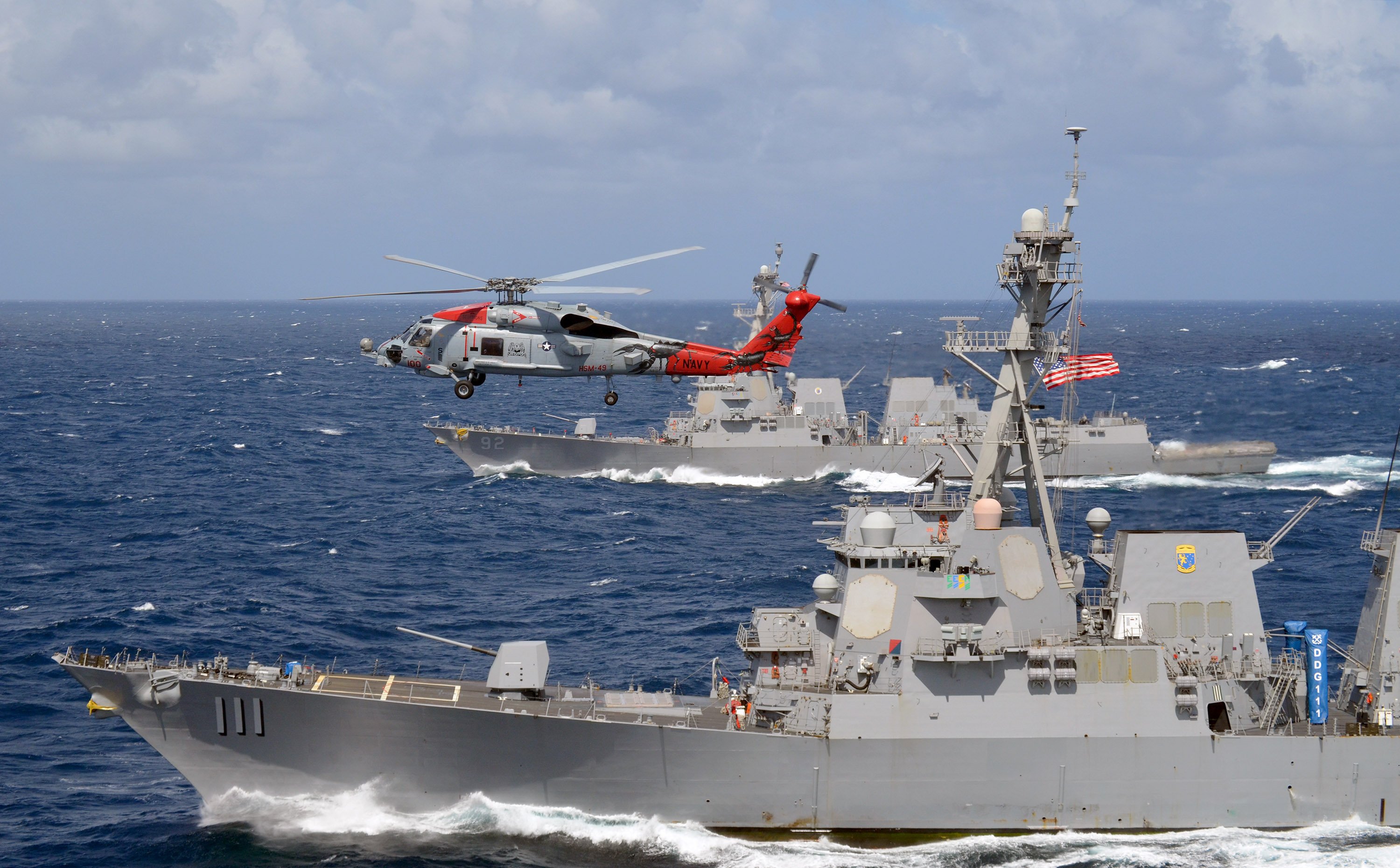 “We have to stop thinking of adversary maritime forces as ‘threats’ and instead what they really are: ‘targets’ for our increasingly lethal, distributed surface, amphibious, and submarine forces,” Dr. William Bundy, director of the Gravely Group at the Naval War College, asserted during a recent interview.

Vice Adm. Thomas Rowden, Commander, Naval Surface Forces, stood up the Distributed Lethality Task Force (DLTF) in June 2015 and directed it to develop and implement a strategy to increase the lethality of naval forces. DLTF director Cmdr. Kurt Sellerberg in July 2016 explained the task force “is placing a renewed emphasis on offensive sea control deriving from the simple truth that we cannot persistently project power from water space that we do not control. Sea control can no longer be assumed in an increasingly contested environment,” he continued, “and we need to think differently on how we seek to gain control of the sea––from the sea floor, on the waves, in the air, in space, and in the electromagnetic spectrum.”

“In broad terms,” Jeffrey Kline, chair of the Systems Engineering Analysis program at the Naval Postgraduate School (NPS), observed, “distributed lethality proposes creating small offensive adaptive force packages comprised of surface action groups with a variety of support elements that operate across a wide region and under an adversary’s anti-access sea denial umbrella. Its purpose is to confound adversary locating and targeting while introducing a threat to their sea control ambitions. It is an offensive concept for the U.S. surface forces,” he continued, and “represents a course change for surface warfare.”

To “operationalize” DL, the Task Force, Naval War College and Naval Postgraduate School have sponsored a series of workshops, exercises, wargames and experimentation to open the aperture and explore distributed offensive operations across a broad maritime battlespace. “The DL wargaming effort that was put into motion has enabled the conversation on a broader scale,” Sellerberg said. “Thinking differently has impacted our behavior in positive ways as we continue to refine the DL concept.” And they are looking to the fleet for real-world operational insight to shape and inform the analytics.

Bringing in the Operators

From 4 to 8 April 2016, Destroyer Squadron 15 hosted the third annual Surface Warfare Officer Summit at Yokosuka, Japan. More than 250 surface warfare officers from ten forward-deployed warships convened to discuss surface warfare issues and further explore the potential of distributed lethality. The DESRON summit focused on the three fundamental DL tenets: (1) every ship must be a “shooter”; (2) distribute surface offensive capability geographically; and (3) ensure the correct mix of resources to increase staying time in a fight, which will contribute to surface force resilience in the face of increasingly capable threats, or “targets.”

The 23-24 May DL Summit in San Diego convened more than 150 attendees from the fleet with participants from Japan; Hawaii; Mayport, Fla.; Norfolk, Va.; and San Diego, Calif.. The focus was on tomorrow’s Surface Navy and DL’s “place” in sea-control and power-projection operations. Other important discussions addressed threat (or “target”) trends, wargaming, analytics, and operational prototyping. The event transitioned to a wargame facilitated by the Naval War College’s Gravely Group.

Teams were divided into three maritime action groups: two surface action groups and one “up-armored” expeditionary strike group. “DL planning efforts included maritime component-level planning and direction to maneuver and disaggregate forces across the battlespace,” Dr. Bundy noted. “The entering premise of distributing forces with offensive capabilities across the battlespace are to first deter aggression with the capacity to hold adversaries at risk and then to engage in offensive operations against adversaries.”

“We conducted the exercise at the classified level to explore planning and operations in actual geographic settings under established command structures,” Bundy explained. “The operational level of warfare situations challenged participants and included escalation to various levels of conflict and warfighting scenarios.”

This opportunity to plan offensive operations across an expansive maritime battlespace gave participants an opportunity to think about U.S. Surface Warfare in the age of long-range precision munitions.

“Planning for and execution of offensive operations under the DL mission concept requires an evolution in warfare officers who have been educated and trained to conduct anti-air and anti-submarine warfare while strike operations were delivered by carrier-based air wings,” Bundy explained. “Rather than depend on the tight warfare commander structure within a strike group, distributed offensive operations will require ship group and individual ship commanders to exercise initiative under mission command authority.”

Mission command is a core element of operations where individual commanders operate with a clear understanding of commander’s intent and desired end states to complete mission orders without detailed direction from higher headquarters.

The exercise identified planning alternatives related to control of dispersed forces, including surface action groups and other adaptive force packages that are armed with long-range weapons, such as ship-launched multi-mission cruise and high-speed strike missiles. The exercise gave a broad spectrum of surface warfare officers the opportunity to experience the challenges of planning for dispersed operations.

“There was great enthusiasm among all participants regarding the dramatic effects that even near-term advances can bring to the surface warfare community and combined Navy forces,” Bundy underscored. “And the ‘big take-away’ from the exercise is that surface warfare officers quickly embraced the idea of planning and executing offensive sea-control and power-projection surface warfare.”

“Here at the Naval Postgraduate School,” NPS president and retired Vice Adm. Ronald Route wrote earlier this year, “we have been teaching our officer students the wargaming craft for over three decades. … The scenarios are quite real, and are driven straight out of the war rooms of Navy and Defense commands throughout the world.”

Indeed, the naval surface warfare community is sponsoring an NPS wargame series to examine the deterrence capability of the DL concept in a variety of scenarios. The first NPS game, conducted in fall 2015, featured a Western Pacific scenario and a diverse student gaming team.

“DL is more than window dressing,” Lt. Megan McCulloch asserted. “I participated as a Red Team member in the 2015 game to test various adaptive force packages designed to optimize the Distributed Lethality concept.” The Red Team was given a large amount of latitude in how to employ Red’s more varied forces that included cruiser, destroyer and amphibious forces as well as irregular forces. The Blue Team’s adaptive force packages were mixes of littoral combat ships and destroyers with longer range and more sophisticated anti-surface weapons for the first scenario and an even broader high-low spread of destroyers and guided-missile-armed patrol combatants for the second.

“The game was eye-opening on both the strategic value and execution challenges of Distributed Lethality,” McCulloch noted. “As one Red Team player described it, in this particular region and the given scenarios, Distributed Lethality was ‘operational deterrence with strategic ambiguity.’ The game successfully showcased how the different [adaptive force packages] give Distributed Lethality a greater level of flexibility and increase the options available to [commanders] across the range of military operations.”

“Not only are the logistical challenges greater with a more dispersed force,” she added, “but in the scenario given, the blurring between Red combatants and fishing vessels, as well as the use of disabling unconventional tactic was effective and were more difficult for the operational commanders to counter due to the political or tactical ramifications of any given reaction.”

“The NPS also has the capacity to execute these games at the classified level,” Route wrote, “giving students the opportunity to truly explore the intricacies of the scenario without restriction.” A surface warfare-focused wargame last year explored war-at-sea tactics to specifically support software development for tactics and decision-making. Players included an Air Force F-35A pilot, a Navy F/A-18 pilot, and two surface warfare officers, along with programmers from the Naval Surface Warfare Center at Dahlgren, Va. A key finding centered on how integrating Air Force assets with the DL concept provided new threat acquisition and targeting capabilities to the team’s adaptive force packages.

“On the other hand, although the DL concept allowed for creative employment of Blue forces, it also challenged in-service command and control architecture and processes. We need to address how best to facilitate mission command,” Good suggested. “The use of dispersed unmanned systems provided Blue with options not feasible with manned systems––for example, surface ‘pickets’ that could saturate the battle space with noise and serve as ‘tattle-tails’ or ‘shadows’ of Red assets. And, judging from the experience of Turkish navy players in the game, allies believe that the adaptive force package concept enables much easier integration of combined forces.”

“Future DL wargames at the Naval Postgraduate School will explore DL scalability and the impact of constrained battle space––e.g., a Baltic scenario––on distributed operations,” Good explained. “NPS will also return to the western Pacific next year, focusing on a South China Sea game. In light of the decision of the Permanent Court of Arbitration in The Hague that Chinese claims to extensive maritime sovereignty have no legal or historical basis, and the Navy’s program of freedom of navigation throughout the region, this will certainly generate intense interest in the game’s outcome.”

“Modern warfare will not likely offer the opportunity to learn what we should do in sea combat,” Bundy remarked. “We have to war game and exercise warfighting now in order to deploy credible offensive combat power that will deter aggression and provide the winning margin if deterrence should fail. Future DL tabletop exercise events at the War College will provide progressive experiences with DL concepts, including integration with Joint and combined navy forces.”

Deputy Secretary of Defense Bob Work and Vice Chairman of the Joint Chiefs of Staff Gen. Paul Selva wrote in December 2015, “In the years leading up to the Second World War, we energized our war colleges and schools to think about how we would fight differently in future conflicts, and wargaming was central to this effort. All students and officers returning as instructors were taught how to run a wargame. The constant cycling of officers from the schoolhouse to the operating forces not only created great wargames, but great war-gamers—many of whom turned out to be great wartime commanders.”