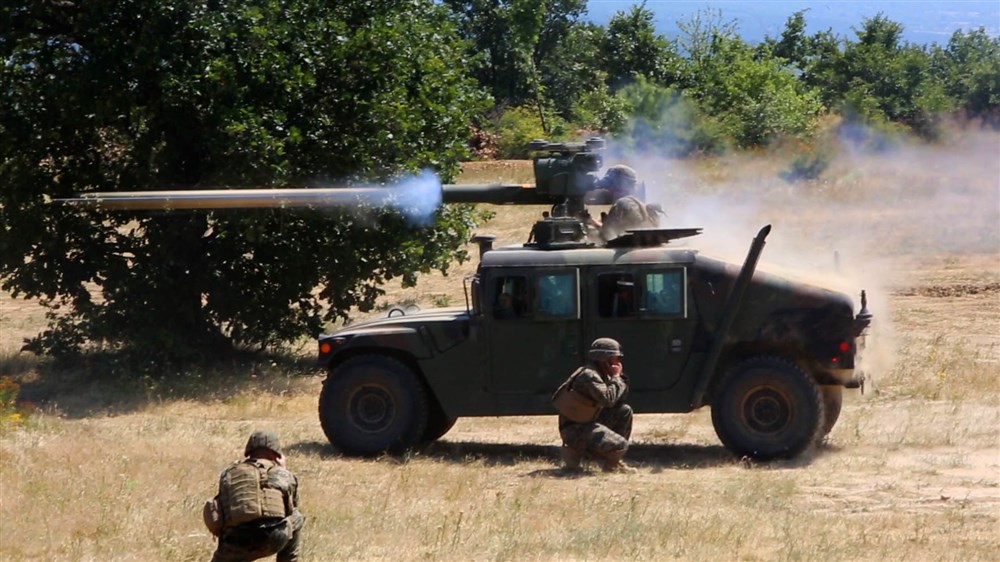 US Marines with the Black Sea Rotational Force, fires TOW anti-tank missile on July 8 in Bulgaria. US Marine Corps Photo

By quadrupling spending to counter a mounting threat from Moscow, the United States’ military emphasis in Europe has shifted from reassuring allies and partners to deterring Russia from “exercising malign influence [and using] coercion” to bully countries on its western and southern borders, witnesses told a key House panel Wednesday.

Air Force Maj. Gen. David Allvin, serving in the top policy post in European Command, said the request for $3.4 billion for the two-year-old European Reassurance Initiative will allow the United States and NATO to respond quickly to new threats and also better predict Moscow’s behavior through the command’s new Russia Strategic Initiative. The strategic initiative is to avoid surprises like those in Crimea.

A tangible change will be reversing the trend of the American military pullback from the continent. Allvin cited the prepositioning of equipment for an armored brigade and armored brigades from the United States bringing their own M-1A Abrams main battle tanks and Bradley fighting vehicles to the continent for rotational training missions with allies and partners. He said the command is projecting more than 100 exercises between American and alliance forces, ranging in size from company level training to battalion and higher for the coming fiscal year.

In 2017, the command will receive an armored brigade combat team, an artillery brigade and a battalion to stand up a division headquarters, if needed for permanent stationing in Europe.

Allvin said in answer to a question about the downsize of the buildup “is an escalation risk.”

Citing “irresponsible behavior from the Baltic to the Black Sea” by Russia, Rachel Ellehuus, principal director of Europe and NATO policy in the Office of the Secretary of Defense, said, even with that change and alliance solidarity against Russian coercion, “demand continues to outpace supply.”

“European nations and NATO have stepped up” their efforts to deter Russia from further military moves that it took in seizing Crimea, supporting separatists in eastern Ukraine and menacing the Baltic states by cyber attacks on their infrastructure.

That stepped-up response shows in increased defense spending, although only five of the 28 NATO members are meeting the 2 percent of gross domestic spending on defense target set by the alliance, she said. It also shows in political will, such as Germany has shown in keeping tough economic sanctions in place against Russia for its actions in Ukraine.

Ellehuus also mentioned France’s deploying of an aircraft carrier to the Middle East, alliance members reaching cooperative agreements on base usage and forward presence infrastructure being built in Poland and Estonia, Latvia and Lithuania as helping offset risks of any new Russian moves.

Allvin included in cyber, propaganda and information operations as elements of hybrid warfare has used in the past to get its way in flashpoint crises.

Later, in answer to a question about President Vladimir Putin’s intentions in the future, Ellehuus said “We’ve seen he is an opportunist.” But “demonstrated strength changes that calculus” that it would be to Russia’s advantage to stir up a crisis. Borrowing a child-rearing adage, she said, “We reward the good behavior; punish the bad.”

Allvin said the goal is to show a “potential doer” that what he is is trying to achieve is either unattainable or will come at such a high cost as not to be worth it.

Anticipating a question in the hearing of the House Armed Services Oversight and Investigation Subcommittee on the United Kingdom’s pending withdrawal from the European Union, Ellehuus said London is still planning to modernize its maritime patrol aircraft and attack helicopter fleets and continue its at-sea deterrence missions.

NATO and the United States have “managed to weather the storm.”

A sticking point in the funding for the coming year for many committee Democrats and the administration is that so much, more than $2 billion, for the European initiative will be coming from an emergency defense spending account rather than as a line-item in the regular budget.

“We would like to see more things to move into the base,” Ellehuus said. That would allow better long-term planning and provide assurance to allies of America’s long-term commitment, Allvin added.