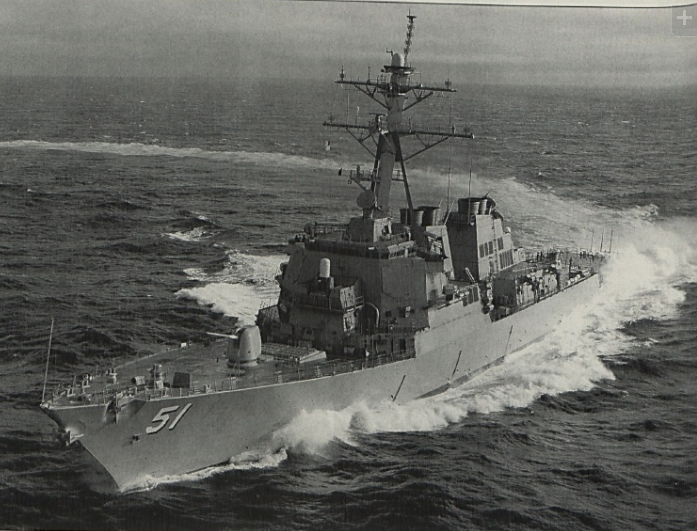 The following is a July 1991 piece from Proceedings on the new Arleigh Burke-class of guided missile destroyers from the commander’s perspective with the original title, “Arleigh Burke is Back.” Today, July 4, 2016, is the 25th anniversary of the ship’s commissioning. On the occasion of the 25th anniversary Vice Adm. Morgan penned a new piece on the destroyer in the current issue of Proceedings.

0n 29 April l99I, the Navy took delivery of the USS Arleigh Burke (DDG-51). She will be commissioned on the fourth of July in her home port of Norfolk. Virginia. Much has been said and more written about the introduction of this new class of Aegis destroyers, but two areas have received little attention-the crew. and the way the ship handles.

Too many think that new construction ships like the Arleigh Burke are manned by perfect sailors. Not so. But my crew is very representative of the talented people in the Navy today. I guess the height of the bar these days is just getting higher and higher. I’ll admit one thing. We may not be the best sailors in the Navy but we are among the luckiest. having been given the opportunity to bring Admiral Burke’s ship to life. Rumors to the contrary, the crew is not hand-picked. That is not to say that I did not attempt to influence where I could the assignment of a handful of people. I did. But the Navy has sent our ship competent, well-trained men.

We have had a few problems that are probably no different from those on any other destroyer. We certainly have fumbled around getting personnel qualification standards dates to match on the various forms that are required these days, and we are consistently less than perfect in all the other inspections everybody faces. Even so, I think we are a group of solid professionals. The chiefs are a pretty remarkable bunch. I wouldn’t trade one of our chiefs if the personnel center gave me a blank check.

Five master chief petty officers in a destroyer is pretty impressive and four of them made rate after almost two years on the job in the Arleigh Burke. Either chiefs are getting better or I’m luckier than I think.

I have done some different things in the wardroom, particularly in the combat systems department. First. I asked for all exceptional Limited Duty Officer as combat systems officer, and l have been criticized for robbing an aspiring line officer of a vital opportunity. I know that I paid a price for my choice, but in this unique case I am satisfied that I made a good call.

The major change in the combat systems department is the creation of a billet we call the Combat Systems Engineer. This new billet is manned by a lieutenant commander who is an engineering duty officer. He reports directly to the Combat Systems Officer, and his contribution to the successful introduction of this ship has been invaluable. He brings a technical focus to operating this complex destroyer and certainly adds a unique insight to daily fleet challenges.

Most important, when he leaves the ship and reenters the mainstream of the engineering duty community, he will have a greater appreciation for what ships at sea are all about. I think every new construction Aegis ship should be manned by an engineering duty Combat System Engineer for the first two years of her service life.
There is no question that the Arleigh Burke is a high-technology ship manned by high-technology and high-quality sailors.

More important, there is no question in my mind that U.S. sailors control this high technology destroyer not vice versa. We can operate this ship because we are well educated, well trained in taking complex surface combatant to sea.

As far as the ship handling is concerned, the Arleigh Burke is extraordinary. What makes her so distinctive is her length-to-beam ratio. She is 466 feet at the waterline, 66 feet on the beam, and draws almost 33 feet. As might be expected, she is quite stable in a heavy sea. During our first tiring trial, we operated in sea state ten, with

20-foot seas and 50 knots of true wind across the deck but the ship was very stable despite the rotten weather. The ship heels less than 10° when executing a hard rudder turn — 35° rudder at 32 knots — in calm seas. With twin rudders and two propellers that rotate outboard, rather than inboard, as on Aegis cruisers and Spruance (DD-963)-class destroyers. the Arleigh Burke handles very much like a Charles F. Adams (DDG-2)-class destroyer. Although she is broad on the beam. she is quite agile, thanks to the available 100,000 shaft horsepower.

Twisting is not a problem and handling alongside a pier is easier because she has a relatively small superstructure, i.e., sail area. Drive the ship once and you know that she is a real destroyer.

Tug make-ups are not standard. The bow has a very pronounced rake from the waterline; consequently, in a power make-up the tug is so far under the flare of the bow that its lines are not effective. To move the bow in either direction, the only effective tug make-up is to use a headline and quaterline with the tug making up in the vicinity of the forward vertical launching system. The good news is that with two shafts, a small sail area, and 100,000 shaft horsepower – you don’t always need tugs.

The view from the bridge wings is remarkable. You can see the entire fantail from either wing; helicopter operations are clearly visible. When maneuvering alongside a pier, you can see exactly where the fantail is and what is directly astern. With the power available and great visibility, ship handlers must be careful not to become overconfident.

A new generation of destroyers is about to enter the fleet. Balanced, flexible, tough and survivable, these are the right ships at the right time in history. The Navy has always depended on talented people as well as ships and airplanes that work. As the Arleigh Burke enters the fleet, we can reasonably expect that both the people and technology will succeed.

Commander Morgan commands the USS Arleigh Burke (DOG-51). Prior to assuming command he served with the Joint Chiefs of Staff and was the executive officer of the USS Vincennes (CG-49). He has contributed several articles to Proceedings his most recent was “DDG-51: Future Surface Force Prototype,” in December 1988, pp. 58~6l.