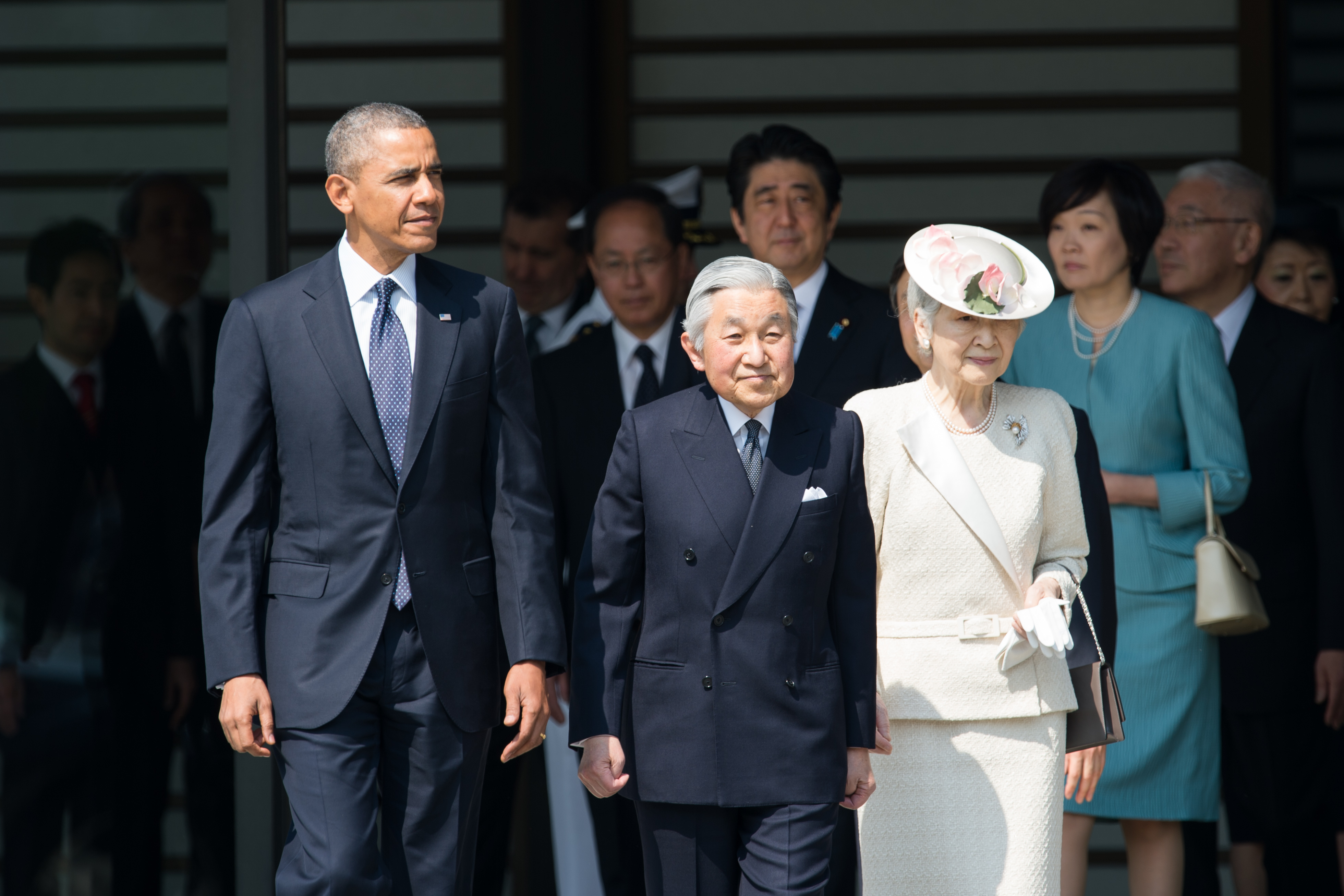 U.S. President Barack Obama participates in the welcome ceremony with their Majesties the Emperor and Empress of Japan and Japan’s Prime Minister Shinzo Abe at the Imperial Palace during his state visit to Japan in 2014. U.S. State Department Photo

Those in Europe and Asia generally have a largely positive view of the United States as the Obama administration winds down, but they hold an overwhelmingly negative view of Donald Trump, the most recent Pew Research Center poll found.

Speaking Wednesday at the Atlantic Council in Washington, D.C., Richard Wike, who directed the survey for Pew, said, “Who’s in the White House can have a big impact” on attitudes about the United States in other nations. He noted that 77 percent of those surveyed viewed President Barack Obama positively, 59 percent viewed former Secretary of State Hillary Clinton that way, but only nine percent viewed real estate developer Trump positively.

He added this unfavorable view of Trump was held even by members of the United Kingdom Independence Party, which favored Great Britain leaving the European Union and the conservative French National Front Party. “We’ll have a report coming out soon,” he said, that will survey the rise of populist political movements in Europe.

Clinton was viewed most positively by older respondents, as she is among potential American voters., Wike said. “It may be an age thing” because “they know her better” and longer.

David Rennie, the Washington bureau chief of the London-based magazine The Economist, said Europeans view Trump in much the same way as they viewed President George W. Bush when they hear the presumptive Republican candidate address his supporters about America being first again, slowing Muslim immigration to the United States or pulling back from NATO. “Some of this may be rhetoric,” he added.

“Trump, he matters even if he loses” because “he is challenging something real” that the American public feels as Bush did after the Sept. 11, 2001 terrorist attacks. But when Bush launched wars in Afghanistan and Iraq and announced a global war on terror, Rennie said that gave credence to the European “desire to see him as an American cowboy.” Likewise, he said the European perception that Americans voting for Obama was “an act of atonement” for years of slavery did not mesh with the reality that the person in office reflects American beliefs at the time.

As for Trump’s views on foreign policy, Rennie, who has interviewed the candidate three times since he announced for the presidency, “he’s kind of pulling back,” but he is not making that change in an apologetic way to the rest of the world

If force has to be used, Rennie said Trump believes “the country has to be meaner . . . the next time.” As for problems in the Middle East the candidate’s approach is that “they’re beyond fixing.”

The public in other nations is “more positive now” toward the United States than it was a decade ago when President Bush was in office, Wike said. In Europe 10 years ago, there was a belief that America wasn’t listening to its concerns over the long-running wars.

The survey also found that the United States was again seen as a surging economic power. Wike added the findings showed, especially in Europe, that using American military power against the Islamic State was viewed positively. But drone strikes “met with overwhelming disapproval” among survey respondents. Rennie thinks “one of the reasons countries get upset with drone strikes is they can’t do them.” He added that Europeans don’t feel the same way when British or French special forces conduct raids on terrorists far from their homeland.