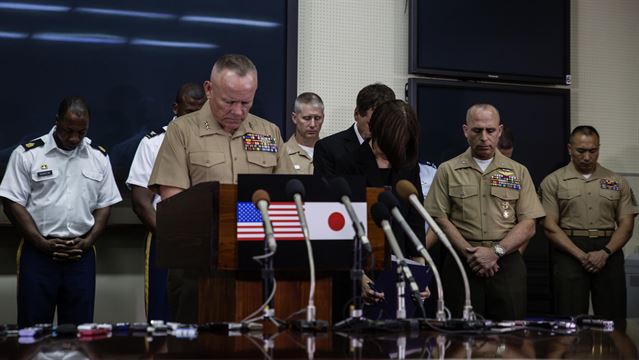 Continued alcohol-related crimes by U.S. service members stationed in Japan – despite protests from Japanese officials, up to a prime minster-to-president conversation two weeks ago – puts at risk the military’s ability to conduct its mission in the Pacific and collaborate with their Japanese counterparts effectively, U.S. military personnel told USNI News.

The Navy’s decision this weekend to ban alcohol consumption and limit off-base liberty for sailors serving in Japan comes amid rising tensions in the country, where Japanese government officials and U.S. military commanders in country have voiced their concerns up the chain of command and even to Ambassador Caroline Kennedy and President Barack Obama.

All service members from all branches of the military serving on the island of Okinawa were already observing a period of “unity and mourning” following the late April murder of a local woman and the mid-May confession by a former Marine and current U.S. military civilian employee. Beginning May 27, the unity and mourning period was meant to be “a time to allow our shared communities to grieve collectively after a senseless act of violence and loss of an Okinawan woman. Until 24 June, all U.S. Forces on Okinawa will cease all off-installation celebrations or significant events; all personnel will cease off-base liberty at midnight; we will not consume alcohol off-base during this period,” 1st. Lt. Courtney Caimona, a spokeswoman for III Marine Expeditionary Force in Japan, told USNI News.

Over the weekend, though, a 21-year-old petty officer second class assigned to Navy Munitions Command at Kadena Air Base was arrested on suspicion of drunken driving after driving the wrong way on a highway and crashing into two cars, injuring two drivers, Stars and Stripes reported.

U.S. Naval Forces Japan spokesman Cmdr. Ron Flanders told USNI News that this was the third driving while under the influence arrest in the past month among sailors serving in Japan, along with other alcohol-related misconduct incidents from Navy personnel throughout the country.

Top leadership discussed the DUI incident shortly after the arrest was made – USNI News understands the those notified included a range of senior military officials and even U.S. Ambassador to Japan Caroline Kennedy. Rear Adm. Matthew Carter, Commander of Naval Forces Japan, and Vice Adm. Joseph Aucoin, Commander of U.S. 7th Fleet, decided over the weekend that a temporary ban on off-base liberty and alcohol consumption was needed until every sailor serving in Japan could receive in-person training.

“In the message to the fleet they told every command that they wanted each sailor to hear from the command triad and also that this message would be shared with our civilian workforce and our dependents as well,” Flanders told USNI News.
“And so basically this would be the face-to-face training and reiteration of what our liberty policies are in our command.

“I think the desired outcome is that every sailor understands how important [their behavior] is to the U.S. strategic alliance with Japan – their understanding of their role as ambassadors of the United States. That is the goal of this training,” Flanders said.

Aucoin said the Navy statement that “the overwhelming majority of our Sailors are doing an outstanding job every single day,” but the actions of a few are hurting the Navy’s ability to conduct their mission in Japan, one Navy official said.

One sailor was arrested on March 13 for raping a Japanese tourist at a hotel on Okinawa, and though he originally denied the accusations he later admitted to attacking the woman, The Japan Times reported. Lt. Gen. Lawrence Nicholson, commander of III Marine Expeditionary Forces and Marine Forces Japan, met personally with the governor of Okinawa to apologize for the crime after protests in the community broke out and a slew of formal protests were sent from Japanese government officials to the U.S. military, Stars and Stripes reported. Still, one of the recent DUI arrests happened shortly afterwards, USNI News understands. Then, on May 19, a former Marine and civilian employee at Kadena Air Base admitted to murdering an Okinawa woman in late April, sparking further outrage, The Japan Times reported.

The most visible protest came from Japanese Prime Minister Shinzo Abe, who at a May 25 press conference said while standing next to Obama that “I firmly lodged a protest against President Obama as the Japanese Prime Minister with regard to the most recent case in Okinawa. The entire time for the small group discussion was spent on this specific case in Okinawa. And I feel profound resentment against this self-centered and absolutely despicable crime. This case shocked not only Okinawa but deeply shocked the entire Japan. I conveyed to the President that such feelings of the Japanese people should be sincerely taken to heart. I also urged the United States to take effective and thorough means to prevent a recurrence and vigorously and strictly address the situation,” he said through a translator.

And still, alcohol-related crime by American sailors continued after Abe’s sharp words. The Navy official told USNI News that when talks about sailor misconduct reach such a high level, it affects the units’ ability to conduct their mission.

Caimona, the Marine Corps spokeswoman, told USNI News that Marine liberty policy ebbs and flows based on current events as a means of preserving the relationship with the surrounding community. She pointed to a statement from Nicholson on the mourning period in which he said “This is about honoring the victim, her family, and sharing in the grief with the people of Okinawa. That is what we are doing, and we have made sure that all 50,000 Americans, and especially our young servicemen, understand why we are doing this – out of respect.”

Further, she said, “we constantly are out in the community, making friends with our neighbors. … Everywhere there are Marines, you will see them out in town volunteering, whether it be at a church event, a beach cleanup, or a friendly sports competition. Everywhere we go, we work to make our communities better.”

Still, for the Navy, recent tragic events have outweighed the positive steps, leading to drastic action. Flanders said he didn’t know for certain if restricting all 18,600 sailors stationed in Japan was unprecedented, but it is certainly “highly uncommon,” he said.

“It is incredibly tense here in Japan,” he said. He didn’t have a timeline for how long it would take to get through all the one-on-one training and lift the liberty and alcohol restrictions, but “once the training is complete for all sailors in the command and we can acknowledge that this message has been delivered to all our [sailors] and civilians as well, then we’ll look at lifting the liberty curtailment.”

The short-term measures are “a necessary response to a very disturbing trend, but long term, we realize we have a long-term effort that needs to be undertaken” to stop crime and misconduct by sailors and civilian employees, Flanders said, noting the Navy owes it both to the Japanese and to the sailors working hard to carry out their missions to ensure that individuals don’t put at risk the U.S./Japanese relationship.