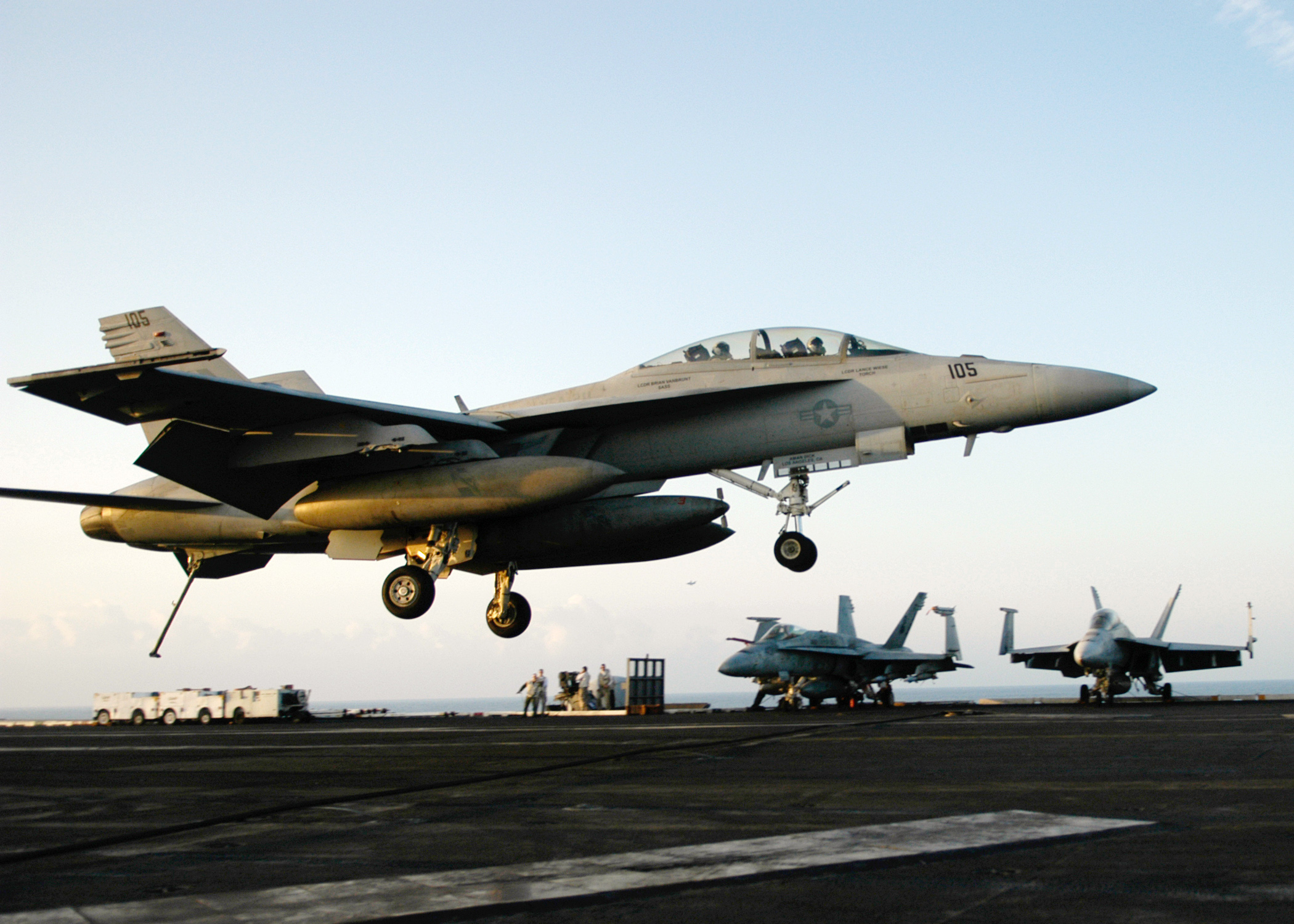 The four crew were recovered and transported to Sentara Norfolk General Hospital by a Coast Guard helicopter, according to a release from the Coast Guard’s 5th District.

“Coast Guard Fifth District Command Center watchstanders were notified at 10:30 a.m. that two planes collided and four people were in the water,” read the statement.
“The crew of the commercial fishing vessel Jamie recovered all four survivors.”

The Virginian-Pilot published photographs that showed two of the air crew walking on their own from a Coast Guard HH-60 Jayhawk helicopter to the Sentara Norfolk General Hospital.

The aircraft were assigned to Strike Fighter Squadron 211 “Fighting Checkmates” (VFA-211) based at Naval Air Station Oceana, Va., according to the service. The Super Hornets were operating about 25 miles off the coast of Oregon Inlet, N.C. when the pair went down following a collision around 10:30 A.M. EST, according to Coast Guard.

The aircraft were not part of the upcoming USS Dwight D. Eisenhower (CVN-69) deployment, slated to occur next week, a Navy spokesman told USNI News.

The crash on Thursday follows a 2015 aircraft loss from the same squadron during a deployment to the Persian Gulf operating from USS Theodore Roosevelt (CVN-71).

The Navy is now conducting an investigation into the crash.

The two Super Hornets went down during testimony from the commodore of Strike Fighter Wing Atlantic, Capt. Randy Stearns, before the House Armed Services Committee on F/A-18 readiness shortfalls in Washington, D.C.

The following are the May 26, 2016 releases issued by Coast Guard 5th District and commander, Naval Air Force Atlantic on the collision.

NORFOLK, VA. – Two F/A-18F Super Hornets assigned to Strike Fighter Squadron (VFA)211 flying off the coast of Cape Hatteras were involved in an in-flight mishap at approximately 10:40 a.m. local time. The flight was part of a routine training mission.

All aircrew have been recovered and are en route to medical facilities for evaluation. The F/A-18F is a two-seat aircraft. VFA-211 is based at Naval Air Station Oceana.

A safety investigation will be carried out to determine the cause of the accident.