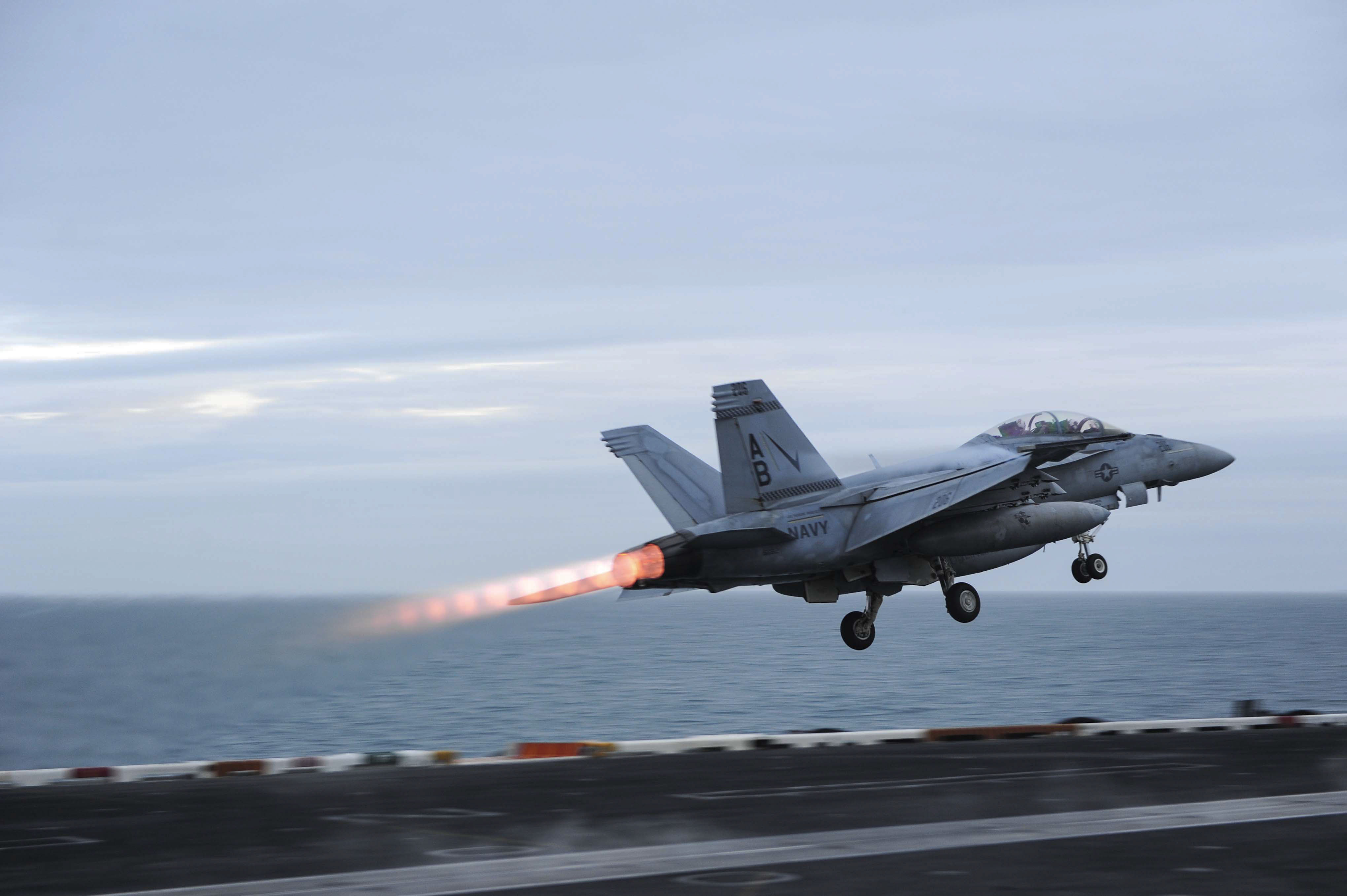 An F/A-18F Super Hornet assigned to the Checkmates of Strike Fighter Attack Squadron (VFA) 211 launches from the aircraft carrier USS Theodore Roosevelt (CVN-71) in March. A Super Hornet from the squadron crashed in the Persian Gulf on Tuesday. US Navy Photo

An U.S. Navy F/A-18 F Super Hornet has crashed in the Persian Gulf on Tuesday at about 9:30 A.M. EST, Navy official told USNI News this afternoon.

The crew onboard the two-person Boeing strike fighter ejected out of the aircraft and were safely recovered by crew aboard the USS Theodore Roosevelt (CVN-71), the service said.

“Initial reports indicate both are conscious and alert and without serious injury,” read a Navy statement.
“The crash was not a result of hostile activity.”

The more than $60 million fighter lost power shortly after takeoff from Roosevelt and while the sailors ejected the aircraft safely the plane has been declared a total loss, the service told USNI News.

In December, U.S. Air Force Capt. William Dubois, 30, was killed in an F-16 Fighting Falcon crash as part of OIR and Marine Cpl. Jordan Spears, 21, died after bailing out of a MV-22 Osprey that lost power taking off from USS Makin Island (LHD-8).

The crash is the first operational loss of of a Super Hornet since 2013 and the first Navy F-18 fighter lost since Operation Inherent Resolve (OIR) began last year, according to press reports.

The squadron is attached to Carrier Air Wing One which is part of the Roosevelt Carrier Strike Group and has been flying against Islamic State in Iraq and Syria (ISIS) militants since the strike group’s arrival to U.S. Central Command (CENTCOM) in April.

Several Oceana-based fighters have been involved in crashes over the past three years. In January 2014, a Super Hornet from VFA-143 crashed in a mid-afternoon flight after the pilot ejected. The Navy’s investigation found the pilot lost “situational awareness regarding his altitude, airspeed and rate of descent, descending more than 9,220 feet in just 44 seconds.” The Navy called this a “preventable mishap” caused by a lack of “proficiency and experience,” and the jet was a total loss.

Just five months later, in June 2014, a Super Hornet pilot from VFA-81 was training off the coast of Southern California when the pilot ejected as he approached the carrier USS Carl Vinson (CVN-70) and the jet crashed into the Pacific. In April 2013 a Super Hornet from VFA-103 crashed in the Persian Gulf while operating off USS Dwight D. Eisenhower (CVN-69). And in April 2012 two pilots ejected from a legacy Hornet after both engines failed. The plane crashed into a nearby apartment complex.

In September 2014, two Hornet pilots from West Coast units – VFA 94 and VFA 113 out of Naval Air Station Lemoore – crashed over the Pacific during training. One pilot was rescued, but Lt. Nathan Poloski from VFA-94 died in what the Navy called a tragic accident.

The following is the full statement from U.S. Navy 5th Fleet.

The two personnel aboard the strike fighter ejected from the aircraft, survived the crash and were quickly recovered by search and rescue personnel from the ship. The recovered Naval Aviators are being evaluated by medical personnel aboard USS Theodore Roosevelt. Initial reports indicate both are conscious and alert, and without serious injury.

The crash was not a result of hostile activity.

Strike Fighter Squadron 211 is based at Naval Air Station Oceana, Virginia, and is assigned to Carrier Air Wing One. USS Theodore Roosevelt with its embarked carrier air wing is currently in the Fifth Fleet supporting Operation Inherent Resolve, conducting strike operations against ISIL in Iraq and Syria.