Tugboats guide the aircraft carrier USS Dwight D. Eisenhower (CVN-69) from her dry dock at Norfolk Naval Shipyard to a nearby pier in August 2014. US Navy Photo

When the Navy rolled out its Optimized Fleet Response Plan (OFRP) in 2014 and began inducting its first aircraft carriers into the force generation model last year, leaders made clear that it would take some time to fully implement the plan and regain full carrier strike group readiness.

Those leaders spoke anecdotally about maintenance availabilities running long, forcing ship crews to compress training so they could deploy on time – but the Government Accountability Office this week released a report that quantifies those struggles, highlighting the importance of keeping OFRP implementation on track.

“These schedule overruns resulted in an average of 65 and 46 lost operational days per availability for aircraft carriers and surface combatants, respectively,” according to the report.

But the averages only tell part of the story. 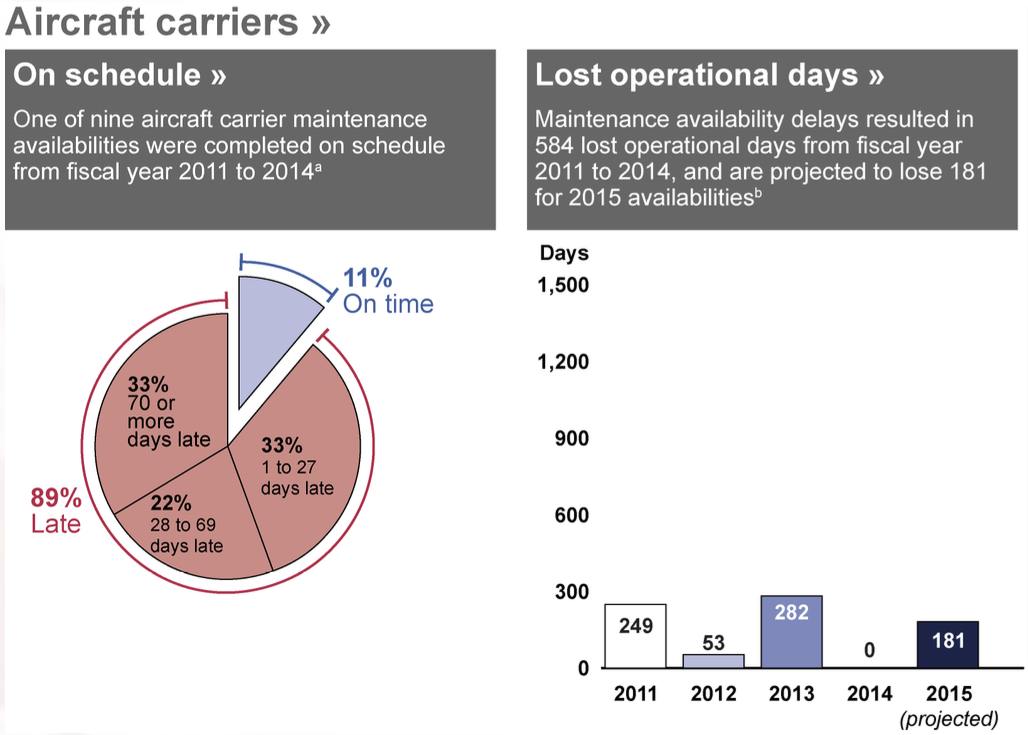 For the nine carrier availabilities in that time period, three were one to 27 days late, two were 28 to 69 days late, and three were 70 or more days late – including the USS Dwight D. Eisenhower (CVN-69) availability which grew from a planned 14 months to 23 months total “to accommodate two-and-a-half times more growth and new work than the Navy had planned for, as well as shipyard performance issues,” according to the GAO report.

As a result, the Navy lost 584 operational days from the carrier maintenance delays, and those cuts came primarily in the form of compressed pre-deployment training schedules. In the case of USS George H. W. Bush (CVN-77)’s 2015 maintenance availability that ran more than two months long, the Navy cut three weeks from the ship’s deployment and compressed the training schedule by five weeks. In the case of Eisenhower, the Navy had to send USS Harry S Truman (CVN-75) out on deployment instead, trading a maintenance period for a back-to-back deployment that Navy officials have speculated will cause problems down the road. 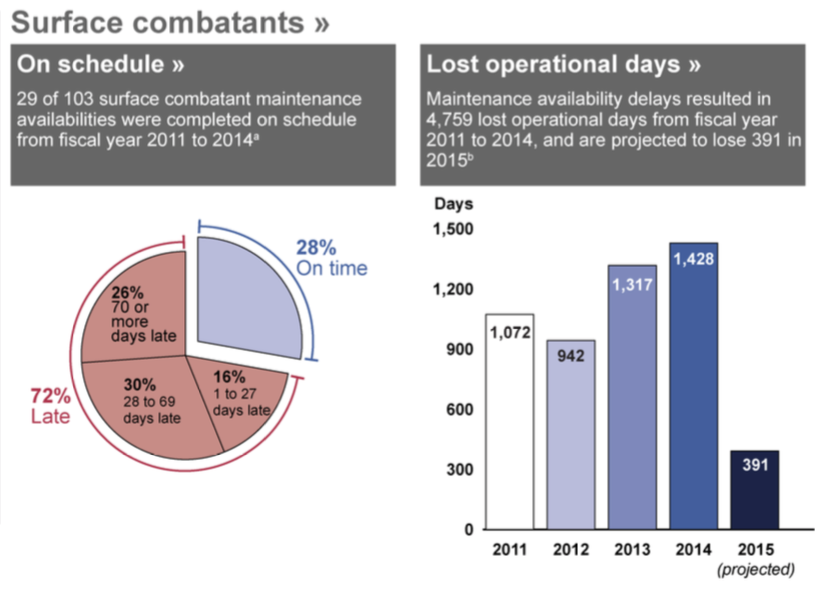 The GAO report dove into what factors caused those maintenance availability overruns, including planning, personnel and facilities problems. The report suggests room for improvement on the contracting and work planning side, noting that “the Navy did not finalize work to be performed within the timeframes presented in Navy guidance for 53 percent of all private-sector aircraft carrier maintenance contracts and 70 percent of cruiser and destroyer contracts from fiscal years 2011 to 2015. According to industry officials, delays in finalizing work packages can contribute to delays in starting maintenance.”

When unanticipated work arose, the report adds, it took an average of 18 days to process and negotiate the contract updates, beyond the Navy standard of five days. “The Navy expects that using a third party planner will reduce growth and new work overall; however, data on the impact of this change are limited as of February 2016,” according to the report.

Aging facilities have also slowed down ship maintenance work, the report noted. The drydocks at public yards average 81 years old and the facilities average 62 years old – and issues related to the aging infrastructure slowed down 96 ships in maintenance from 2010 to 2013, the GAO study found. As for personnel, 32 percent of public shipyard workers have less than five years of experience, which can negatively affect shipyard productivity, the report notes. The Navy is completing a hiring spree to boost the workforce and has invested in making workforce training more efficient, but only time will create a more experienced workforce.

The Navy is in the midst of addressing all these issues now, with more funds requested in the FY 2017 budget to address infrastructure issues, and more efficient contracting methods being implemented. It will take years to reverse the trends outlined in the GAO report, though. The report outlines the downward spiral for the carriers – deployment lengths grew from an average of 6.4 months from 2008 to 2011, to 8.2 months from 2012 to 2014, to 9 months in 2015.

Longer deployments mean working the ships harder, which means more unexpected work during the maintenance availabilities, which creates overruns and cuts into crew training time ahead of the next deployment. Undoing that trend will take some time, fleet and maintenance officials have said. The Navy now has three carriers inducted in the OFRP cycle, which begins with the maintenance period – and while the report states that all three maintenance periods have run long so far, it stands to reason that they would, since the ships’ most recent deployments were all on the longer side. Not until the Navy can get a few cycles in – with seven-month deployments, followed by sustainment periods with sufficient pier-side training and maintenance, followed by properly planned and executed docked maintenance availabilities – do officials believe these readiness figures will start to improve.