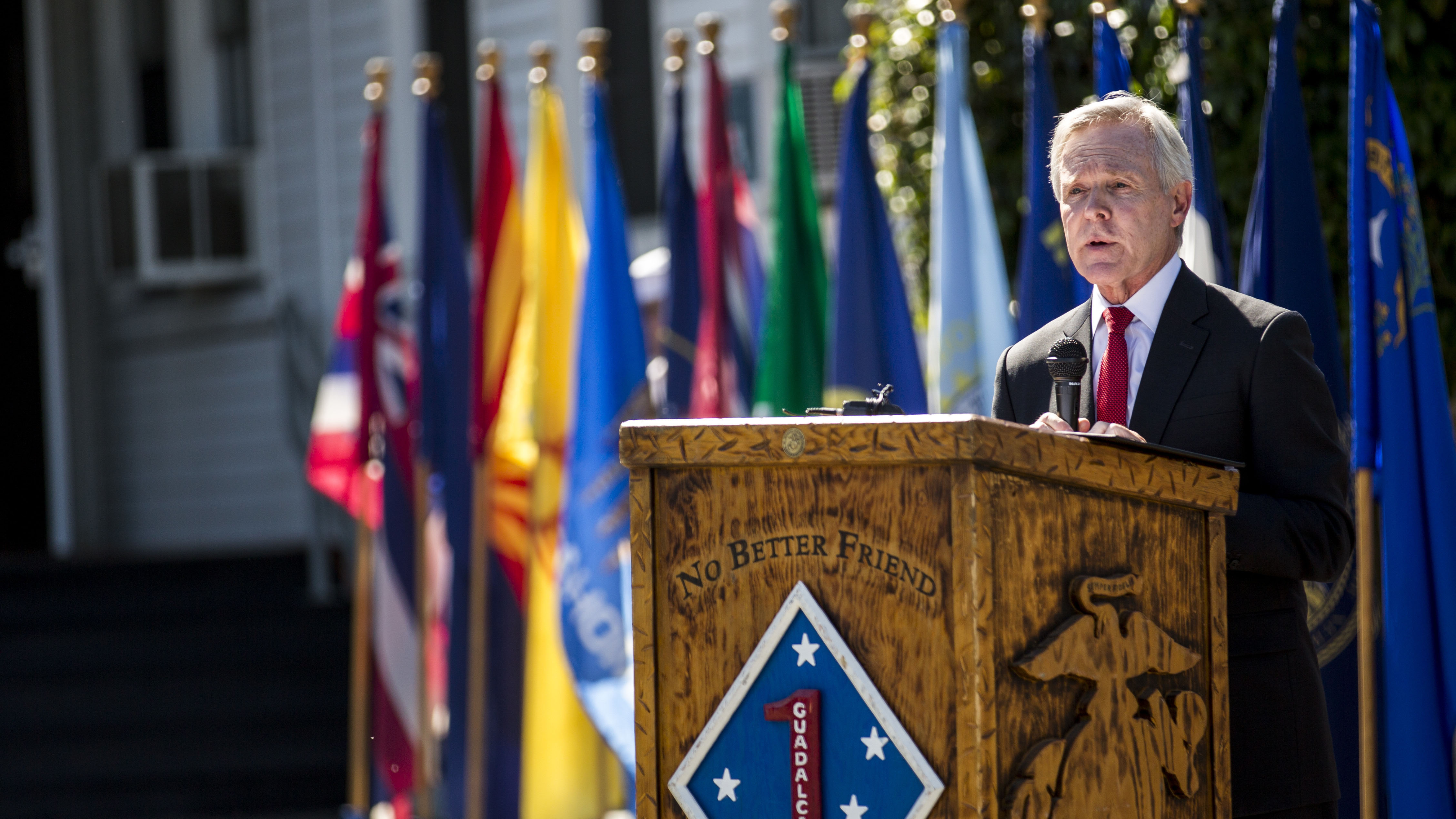 Secretary of the Navy Ray Mabus speaks at a Navy Cross Presentation Ceremony in honor of the late Sgt. Rafael Peralta, at Camp Pendleton, Calif., June 8, 2015. US Marine Corps Photo

“We are past the decision now,” Mabus said, speaking during a stop at Camp Pendleton, marking the third time so far that he’s addressed the issue directly with Marines. “The secretary of defense has made the decision. Now we are implementing it.”

The Marine Corps splits its recruit training at two locations, with female and male recruits trained at Parris Island Marine Corps Recruit Depot, S.C., and only male recruits – those living west of the Mississippi River – trained at San Diego MCRD, Calif. At Parris Island, women are trained in a separate recruit battalion, from arrival to graduation, while men train with one of three male battalions.

Will the Marine Corps switch to fully integrated recruit training battalions? Will it integrate recruit platoons, assign women and men together in the most basic building-block of creating Marines at boot camp?

Mabus told Marines that commandant, Gen. Robert Neller, said top leaders “thought it would work better with genders divided early in boot camp and gradually move into integration. They made a good point. So while we’re going to move in that direction, we’re not going to do it all at once… We’re going to figure out how to better integrate, and do it over time, in a way that doesn’t disrupt training and doesn’t disrupt the way you become Marines.”

During a 15-minute talk, Mabus, who earlier lunched with a small group of male and female noncommissioned officers, echoed the commandant and said the gender-integration issue “isn’t about women in combat. Women have been in combat for a long, long time. We have lost killed in action, 160 women in Iraq and Afghanistan. This is about certain specific MOSs being open to women.”

The process of fully integrating the military services began with a January 2013 decision by then-Defense Secretary Leon Panetta and the chairman of the Joint Chiefs of Staff to fully integrate women into the military. That action would lift the exclusion of women from all ground combat arms units, “unless it is specifically closed,” and set a Jan. 1, 2016, deadline to ask for exceptions. “The exceptions had to be very narrow, and they had to be based on data,” Mabus told them. “You had to prove it that you needed the exception.”

The Marine Corps conducted a lengthy study, which included integrated ground combat training tests at Twentynine Palms, Calif., and helped lead to MOS-specific standards. Mabus, however, didn’t agree with the Marine Corps, which sought exceptions for its infantry units because it found the women participating in the integration study couldn’t keep up with their male counterparts in many situations. He has remained steadfast in his view even as he’s been criticized by opponents to full integration.

“What I disagreed with was once the test was done, the conclusions weren’t based on individuals. The conclusions were based on averages,” Mabus told the crowd at SOI-West. “Marines have never been about average. Ever. You set standards, which we’ve done. Those standards have got to have something to do with the job… tied very closely to the job that we ask you to do.”

Mabus acknowledged some of the still-ongoing debate against full integration. One argument stems from the lack of a female officer graduating from the IOC program, a requirement to become an infantry officer and, likely, lead an infantry platoon into potential combat. No woman yet has graduated from the course. It’s a question Mabus got during his IOC visit, and a Pendleton Marine asked a similar question. Mabus was adamant: Standards aren’t going to change.

He noted that many units, as well as Officer Candidates School and The Basic School and Officer, long have been integrated with men and women, “this is the last step.”

Mabus reminded Marines that strength comes with a diverse military.

“Every time people would argue that we shouldn’t do it,” he said, noting in the late 1940s saw similar vocal concerns over racial integration and fears of lower standards and loss of service culture.

“Same thing when ‘Don’t Ask, Don’t Tell’ got repealed. We are stronger because we don’t judge people on who they love but whether they can do the job as Marines.”

Before Mabus spoke, though, the school’s commanding officer briefly spoke to the Marines. “The orders have been given, so now we will do it. We gave our opinion on it, and there we were given our marching orders,” Col. Christopher J. Williams, the School of Infantry-West commander, told the Marines and a handful of Navy hospital corpsmen seated on aluminum bleachers. “You will execute that. That is our charge.”

Most of the Marines were men, reflecting the male-only training that SOI-West conducts teaching infantry training to future infantrymen and Marine combat training to other male Marines preparing for non-infantry jobs. But women are assigned to SOI-West, however, and female Marines hold positions of varying ranks and military occupational specialties, or MOS, including the commander of the school’s Headquarters and Support Battalion.

For those Marines with strong opinions about the place of women within the Corps’ storied infantry community, the colonel offered a suggestion – “Just check that emotion” – for those considering asking a question of Mabus.

Just what impact that had was hard to tell. Mabus spoke for about 15 minutes, mostly about gender integration. It took some egging from him, however, to get Marines to ask him a question. Eventually, seven Marines, all men, stepped up to ask Mabus a question. Four of them asked about gender integration, touching of female officer training, draft registration and quotas, but none offered a personal opinion or thought about the change. (Other questions hit on budget cuts, force size and impact of amphibious focus on training ashore.

“The MOSs are opening now. It’s going to be pretty gradual,” he said, responding to a question from a Marine NCO. “We already had female Marines pass the School of Infantry. They were offered the MOS. Not many chose to take it.” It will be voluntary, he said, and they’ll have to meet the same standards as the men.

Women remain a minority within the Marine Corps, numbering about 10 percent. Just how many will vie for the infantry, and how many more female recruits might be drawn into the service to help grow the overall numbers, aren’t yet clear. “I don’t know how big the numbers are going to be,” Mabus said.

A Marine asked him asked about draft registration, which under current law is required only of men when they turn 18. “I’m the father of three daughters. I think they should go,” he said but noted “it’s a political decision” that Congress would have to decide. “If you are going to open up everything up, everything ought to be equal in other ways.”

While still a hot-button issue in the Beltway and some corners of the military, full integration seemed less a threat to the Pendleton crowd, at least publicly. A few Marines said they appreciated hearing the secretary explain the issue and state that yes, the decision officially has been made and the force will be fully integrated with men and women.

“It’s just another rule that we have to follow,” Lance Cpl. Guillermo Arenas, an administrative clerk at Headquarters and Service Company, said after the event. “As Marines, we are held to higher standards and we just have to follow them. They set a rule and set a standard and we say, ‘Aye, aye sir’ and carry on the plan of the day… They are doing it for a specific reason.”

“At the end of the day, we have to follow it,” said Arenas, who joined the Marine Corps last year from his hometown of Fullerton, Calif. Mabus’ talk “was motivating.”

“I know females willing to step up to the plate. They challenge themselves,” he said. “We’re all Marines.” He hasn’t heard any complaints, and he supports the fact that they aren’t lowering the standards.

As a staff NCO, Gunnery Sgt. Janet Marrufo already stands out in the mostly-male environment at SOI-West. Marrufo, the admin chief with H&S Company, works with 10 other women and oversees about 30 Marines in all. “I think they see us already leading the pack,” she said. Marines see “there really isn’t a difference…. It’s all about leading and setting the example.”

Marrufo said she agrees with Mabus, including his comments about a diverse force and sticking to the standards. “I really appreciate he made it very clear to everyone that the standards aren’t going to change,” she said.

Some Marines feared a floodgate of women vying to go infantry, “but I don’t think that’s the case,” she said.

Lt. Col. Suzan Thompson, H&S Battalion commander, said it was important for the Marines to hear it straight from the Navy secretary, as many junior Marines aren’t tracking the issue closely. “At least they know it’s already been approved and we’re already moving forward with the integration plan,” Thompson said. Many more Marines, it seems, want to know more about changes to the physical fitness and combat training, she said.

Still, Thompson is aware of the strong opinions, either way, within the broader community. “There’s chatter. You see that on social media,” she said, attributing much of it to “a maturity thing.” The battalion includes the first female combat instructor.

Before he spoke about gender integration, Mabus used the platform to talk to the Marines about other priorities, namely the continuing work to boost the Navy fleet and shift to get more Marines underway at sea on amphibious ships, despite the service’s shortage of decks. “You have been used as a land army for a lot of the last 15 years, and you’ve been magnificent at it,” he told them. “Marines have performed with honor, with courage, with commitment in two land wars. But the highest and best use for Marines is coming from the sea as part of the Navy-Marine Corps team.”

The current fleet of 33 amphibious ships – the “very, very bare minimum that you need” – will grow to “35 in the next few years so you’ll have the tools to do the job,” Mabus said.

He also noted ongoing work that will affect their careers, from revamps to career paths and promotion by merit to increases in family support and educational benefits.