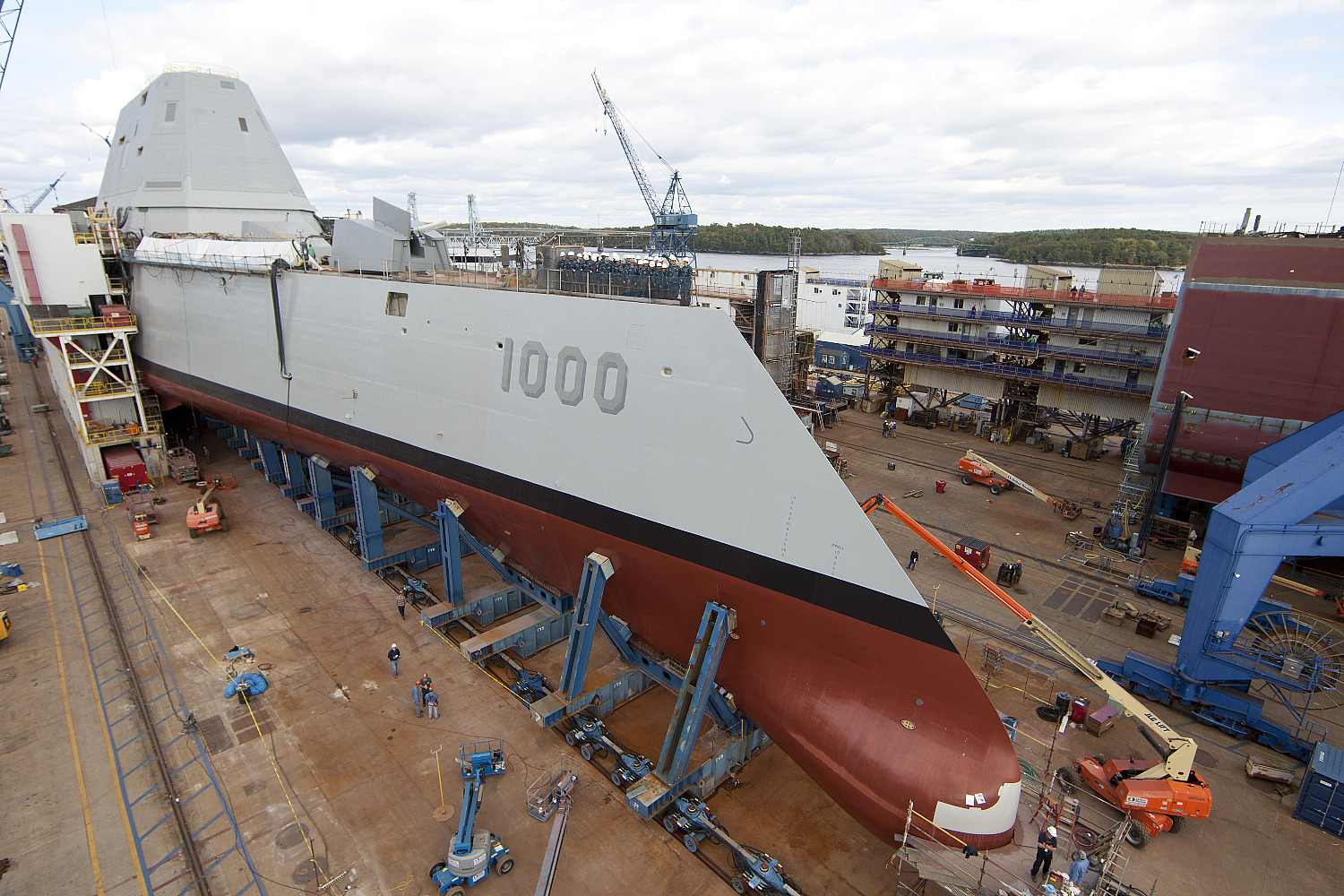 DDG-1000 under construction in 2013. US Navy Photo via General Dynamics Bath Iron Works

The procurement cost of the three-ship destroyer Zumwalt-class (DDG-1000) has increased by $449.5 million since last years largely shipyard performance issues in the construction of the ships at General Dynamics Bath Iron Works, several Navy and congressional sources told USNI News.

The new estimate of the cost for the construction of the three-ship class was included in the Navy’s Fiscal Year 2017 budget submission with an estimate of $12.73 billion for the trio of guided missile destroyers – up from $12.28 billion in the FY 2016 submission, as noted by the Congressional Research Service.

The new estimated total cost of Zumwalt (DDG-1000), Michael Monsoor (DDG-1001) and Lyndon B. Johnson (DDG-1002) – including research and development costs – is now about $22.5 billion with the estimates included.

The total is about the procurement cost – construction minus absent R&D – of the Navy’s first two Gerald R. Ford-class carriers.

Congressional officials told USNI News the cost was in large part due to the performance of the shipyard in completing the construction of the Zumwalts – which feature a complex first-of-type integrated power system that has proved harder-than-expected for the Navy and BIW to build and test. 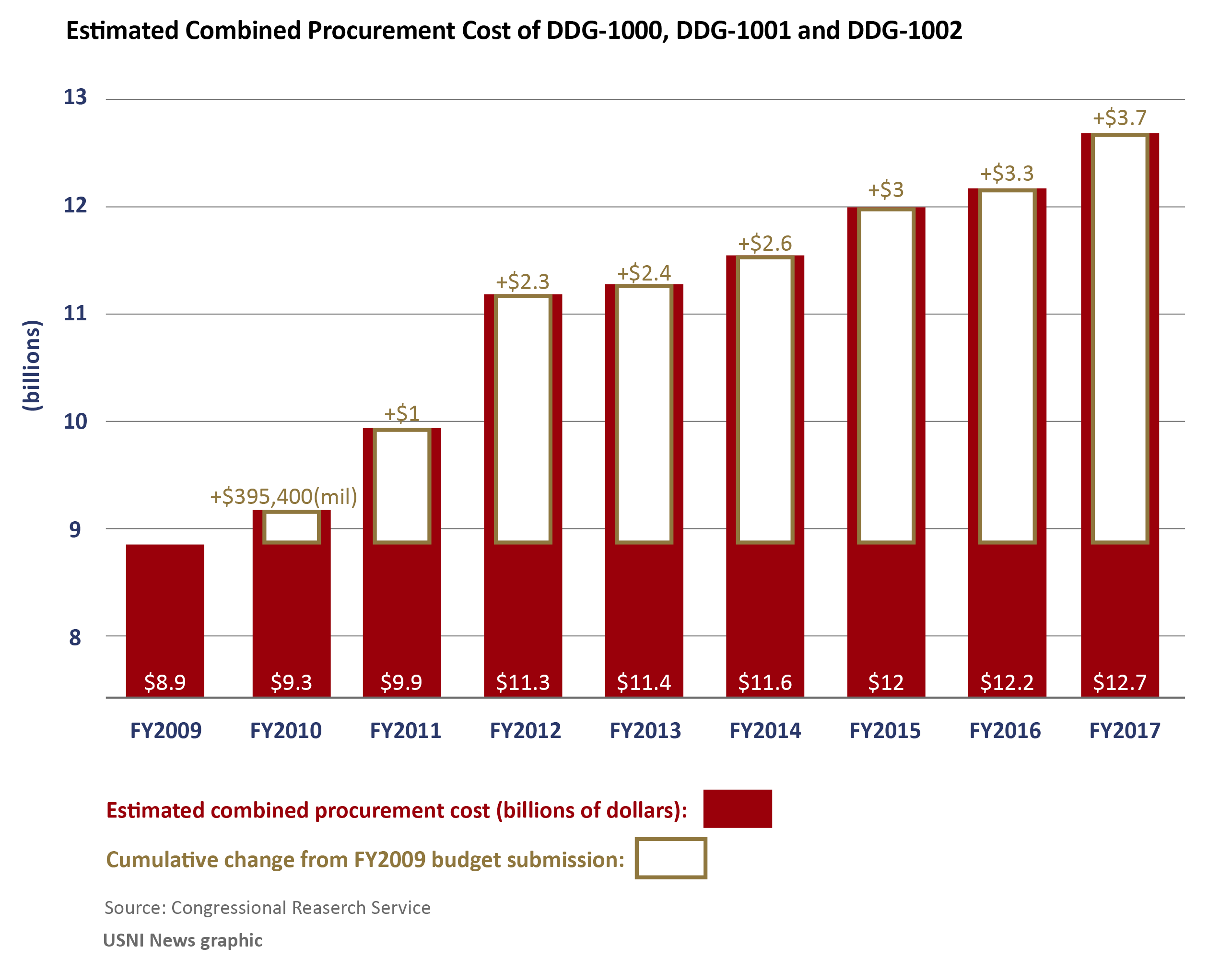 Though the ships are being built at BIW, the Navy is acting as the lead systems integrator coordinating efforts from BIW, Raytheon and other vendors to assemble the ships.

BIW differed comment on the cost increase to the Navy but issued a statement on Tuesday to USNI News.

Some of the cost growth is likely due to the fallout of the since-resolved labor dispute with BIW unions who rankled at a management proposal to bring in outside workers to assist with work to complete not only the Zumwalts but also the Arleigh Burke (DDG-51) guided missile destroyers — also being built in the yard.

Specifically, a shortage of electricians at the yard caused setbacks not only in the DDG-1000 program but also two Burkes being built at the yard, USNI News reported last year.

When asked by USNI News, the Navy did not directly address the reasons for the cost increase but said, “the request for additional funding is directly related to the delivery of DDG-1000 and estimates to complete DDG-1001 and 1002.”

The Navy did provide more detailed estimates breaking out the cost of the individual ships that included an additional $400 million for post delivery work outside of the procurement line items bringing the cost to $13.2 billion.

The cost increases will be included in the Navy’s budget requests from FY 2017 to 2020.

Kent did also say the cost increase would not endanger the program of tripping a Nunn-McCurdy breach.

The Nunn-McCurdy provision is a US statute that requires military equipment cost increases of 25 percent above the original estimate to be terminated save a review and certification process. The provision also calls for a congressional notification if a program cost increases more than 15 percent.

When the DDG-1000 program was trimmed from seven hulls to three in 2010, the program tripped a Nunn-McCurdy breach and was restructured with new shipbuilding cost estimates outlined by the Cost Assessment and Program Evaluation (CAPE) office within the Office of the Secretary of Defense (OSD).

“DDG-1000 remains well within the program baseline,” Kent said.
“A Nunn-McCurdy breach is triggered at 15 percent above an approved Acquisition Program Baseline; the program is well below the N-M threshold.”

The following is the complete April 5, 2016 statement from Capt. Thurraya Kent, provided to USNI News on the DDG-1000 cost increase.

DDG 1000 remains well within the program baseline compared to the March of 2011 APB, which reflects the Nunn-McCurdy review, and is approximately 1% above the objective value in the 2011 APB. A Nunn-McCurdy breach is triggered at 15% above an approved APB; the program is well below the N-M threshold.