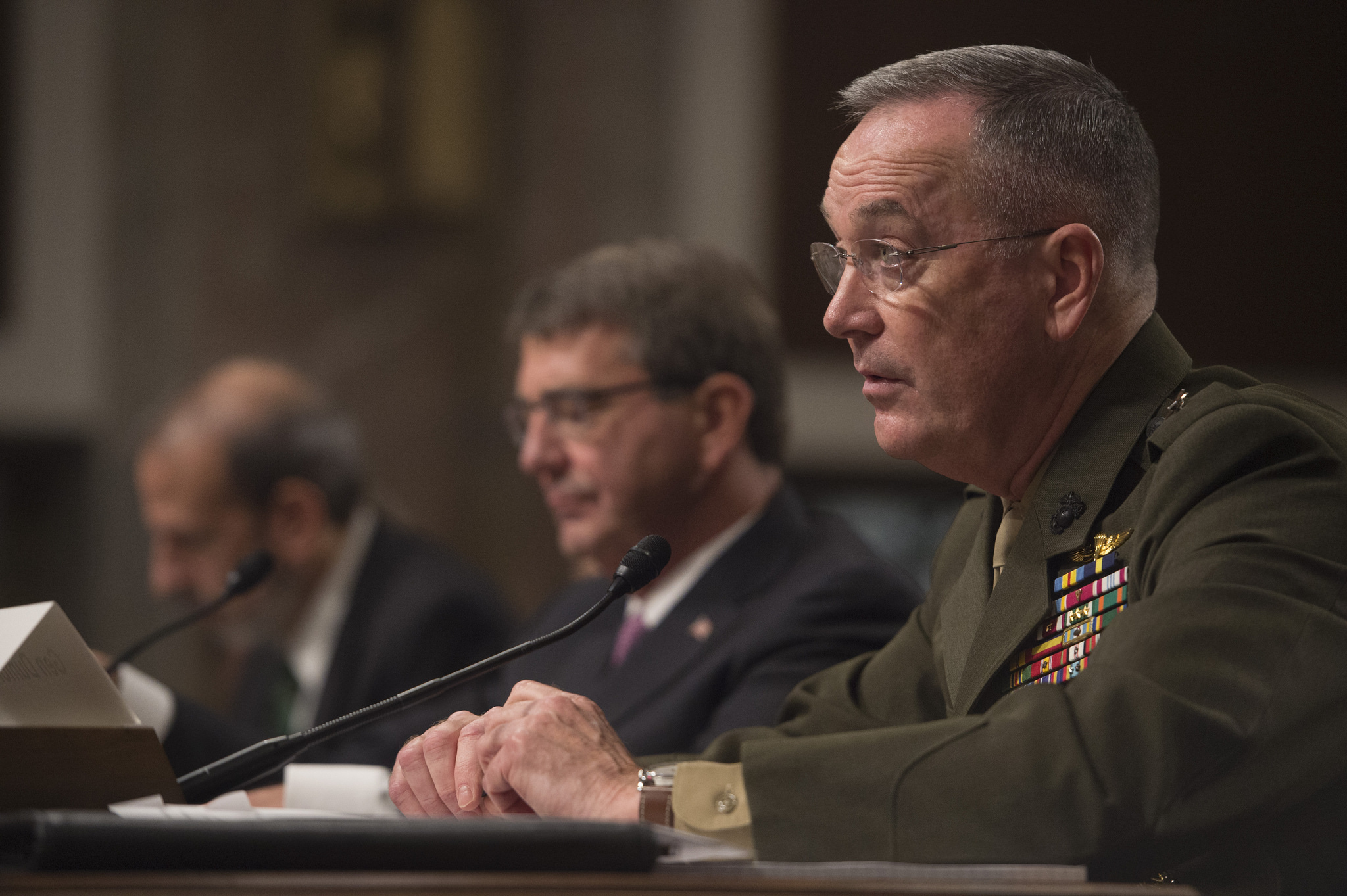 The chairman of the Joint Chiefs of Staff said the next military strategy document will be kept classified, a recommendation often called for in House and Senate armed services committee hearings that began in the fall on “defense reform.”

Speaking Tuesday at the Center for Strategic and International Studies, a Washington, D.C., think-tank, Marine Corps Gen. Joseph Dunford said, “Today we go from policy to OPlans [operational plans], a process that “doesn’t give you intellectual rigor” to meet trans-regional threats covering challenges from land, air and sea to cyber and space.

Using North Korea as an example of the limits of having a purely regional focus in organization, he said that 15 years ago the threat from Pyongyang was centered on the peninsula. Now and in the future the threat could involve Pacific, Northern, and potentially Strategic and Cyber commands because of North Korea’s continued development of long-range missiles, a nuclear weapons program and cyber capabilities threatening other nations far removed from northern Asia.

As another example of change needed after 15 years of war, he added, “We are divesting ourselves [in the Joint Staff, particularly] of some things . . . we did in the past.” Later, in answer to a question, he termed it “kind of de-layering”—at the Joint Staff level—programs such as family readiness, wounded warrior and veterans’ outreach and returning them to the services. “I don’t think I need to do that” on the Joint Staff.

The Pentagon also will be working with the two committees in the next few weeks on ensuring the secretary has a common operating and intelligence picture to make decisions that cross regional command boundaries and the process to do that, another area of concern raised in the earlier hearings on overhauling the 30-year-old Goldwater-Nichols Act, which covers the existing chain of command.

Early on in his term, Dunford signaled a need to re-examine the combatant commands and the size and operations of the 4,000 member Joint Staff.

The chiefs and the combatant commanders “are already after ISR” to determine what kind of intelligence is needed to make decision versus the capabilities of a particular system, he said Tuesday. “The character of war is much more dynamic today.”

Dunford said that traditionally the United States has viewed itself as either at peace or at war. The American military uses the word “phases” to grade conflict. He said the nation’s competitors—Russia, China, North Korea, Iran and “Islamic violent extremism”—don’t use that framework.

He said the challenges that nation faces are not only specifically military but include control of energy supplies and extend to political coercion to achieve their ends in a specific crisis. “Russia is the clearest example” of “knowing exactly what the threshold is” with its “saber-rattling” before the United States will act.

“We’re not there” in being able to best frame the problem “to better integrate our capabilities” across the government.

Dunford said, “Syria is the most difficult challenge” in rolling back the Islamic State in the Middle East. He said the focus on strikes intended to kill its leaders and fighters and disrupting and degrading its operations in Syria and Iraq and “developing effective partners on the ground” is meeting with success.

In answer to a question, he said Russian intervention has stabilized the regime of Syrian President Bashar al-Assad.

As security forces move closer to Mosul, Iraq’s second largest city, the United States “is looking for ways to reinforce success” that Iraqis had in re-taking Ramadi from the Islamic State.

Afghan President Ashraf Ghani remains “fully supportive” of U.S. and NATO efforts against the Taliban. Dunford said he already has presented to Secretary of Defense Ash Carter recommendations on how to proceed from the new commander in Afghanistan, Army Gen. John Nicholson, and his predecessor, as well as Central Command.

He is hopeful that NATO at its meeting in Warsaw this summer will approve ways to secure funding for Afghan operations beyond the coming year so longer-range objectives can be set. By funding for only a short time, it’s “almost a Y2K effect every year” on operations and planning. That approach limits the logistics, special operations forces and aviation support Afghan forces can count on and also building their “ministerial capacity.”