Marines and sailors with Marine Heavy Helicopter Squadron 463 and Marine Light Attack Helicopter Squadron 367 challenged each other to a competition when they launched seven CH-53E Super Stallions, five AH1 Cobras and one UH1 Huey helicopters. US Marine Corps

The state, readiness and safety of Marine Corps and Navy aviation were among the top concerns of Senate appropriators at a hearing Wednesday.

The questions started with Sen. Richard Durbin (D-Ill.), ranking member on the Appropriations Defense Subcommittee asking where the investigation stood into the Jan. 14 collision of two Sikorsky CH-53 Marine Corps helicopters off Hawaii that claimed 12 lives.

Marine Commandant Gen. Robert Neller said the Air Mishap Board was continuing its probe and acknowledged the “CH-53 community is the most challenged” segment of Marine Corps aviation. “It’s a maintenance issue” involving both parts and repair-time in depots. The situation was aggravated by sequestration and the government shutdown slowing work across the Marine Corps.

“We probably kept them [the Ch-53s] in theater . . . too long” to meet operational demands.

The Marine Corps “won’t start to see that [CH-53K model as a replacement] for several years,” he added. 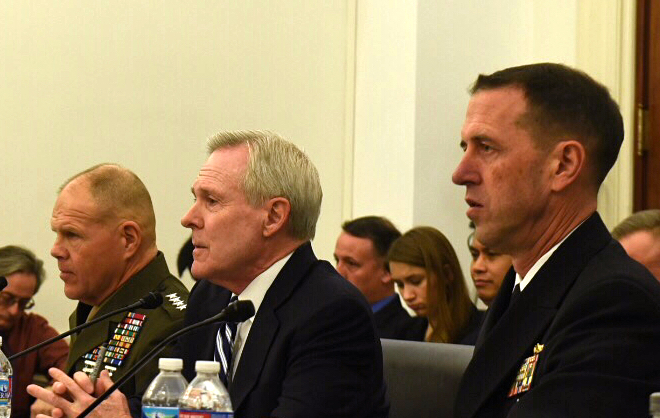 Durbin, in posing the question, noted the collision “turns out not to be an isolated incident,” citing other fatal crashes involving Marine Corps fixed-wing and rotary aircraft. Later, he said he wanted to make sure that the Navy’s $155 billion budget request for Fiscal Year 2017 is high enough so the sea services can finish “digging themselves out of this hole” of delayed maintenance and reduced readiness.

As the hearing was winding down, Chief of Naval Operations Adm. John Richardson said the Navy is addressing its strike-fighter challenge in reducing the backlog of depot work on its legacy Boeing F/A-18 Hornets and it, too, is still recovering from the impact of sequestration and hiring freezes.

To compensate for the depot backlog, “we’ve been flying the Super Hornet more.” As a result, he said, “we’re getting to the end of life faster” in those aircraft.

In their opening statements, Neller and Richardson said they are increasingly challenged in maintaining readiness across the board other than in being the first to deploy ships, crews and Marines and modernizing the Fleet as they face “for the first time in 25 years . . . a return to great power competition.”

Addressing one of those areas, Richardson told the panel “we will keep those maritime lanes” open in the South China Sea. China has laid claim to a number of reefs near those lanes, and in some cases has built artificial islands that now have airfields, radar, aircraft and surface-to-air missiles in place on them.

“About 30 percent of the world’s trade goes through those lanes,” he added.

Secretary of the Navy Ray Mabus said the “need is very clear” for Congress to fund the National Sea-Based Deterrence Fund to pay for the Ohio-class replacement program after FY 2021.

If that does not happen, “other Navy programs would be gutted, including attack submarines” to pay for the new ballistic-missile subs. He said that the department and the Congress putting money into that fund is “one of the most important thing we and you would do.”

On the Ohio-class program, Richardson said the Navy learned the value of “making sure we’ve got the requirements strictly defined” from building the Virginia-class and working with the industrial base to ensure vessels were delivered on time or early or on or below budget.

Later in answer to a question, he added, “It’s absolutely critical to get the design of the ship [right] before we start building.”

Mabus said the Navy is looking at this year’s request to see if it can come up with an additional $400 million to pay for a DDG-51 destroyer that received an appropriation of $1 billion for this fiscal year. He said the anomaly occurred because the FY 2016 budget passed after the service had to lock in its request for the coming fiscal year.

As to what the Fleet’s size should be to meet new challenges from Russia and China, particularly, Richardson said the Navy is updating its study that set a goal of 308 ships as a requirement several years ago.

Neller said the Marine Corps is still committed to moving from Okinawa to Guam, but exactly when “continues to be pushed to the right.” The Corps is also looking at whether early transfers should be done as permanent change of station moves or rotational deployments. He added that there are also possibilities in Australia and the Philippines.

But in all cases finding training areas and distance are factors that have to be considered, Neller said.