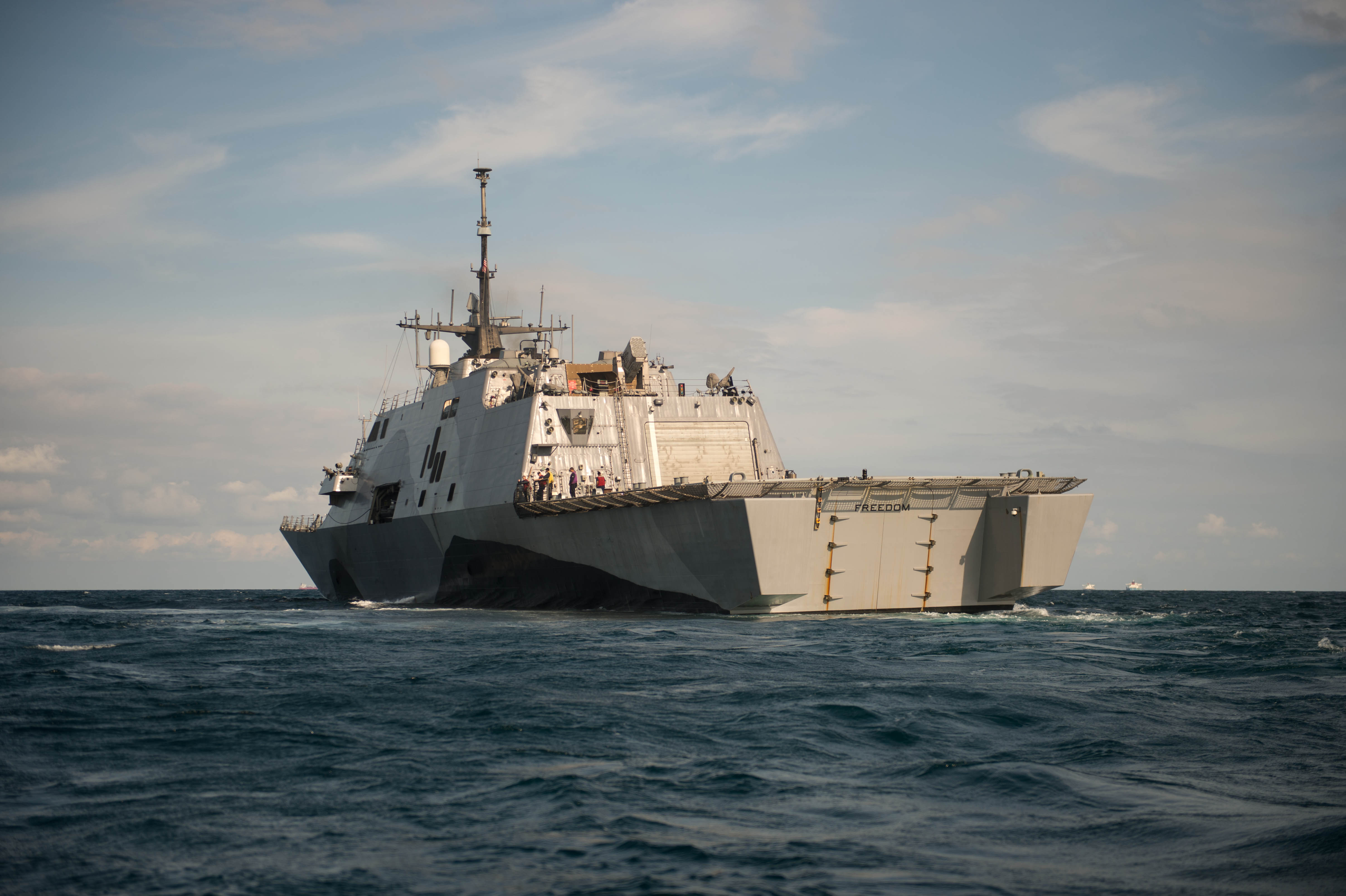 ABOARD USS FREEDOM – When the Littoral Combat Ship USS Freedom (LCS-1) goes out for sea trials this weekend after a drydocking selected restricted availability last year, the ship will feature a more advanced combat system than her sister ships.

During the drydocking period in the summer and fall of 2015, the combat system was ripped out and replaced with new hardware and more advanced software. Additional communications equipment will be added to the ship and the network was upgraded, creating a more reliable and cost-effective system for the sailors to operate, the LCS Crew 111 officials told USNI News.

Operations Officer Lt. Cmdr. Michael Welgan said that “basically the whole engineering architecture and the whole combat systems electronic architecture has been stripped and redone. So the combat system suite is actually more advanced than (LCSs) 3 and 5 now. It’s gotten a lot of good improvements” on both the hardware and software side, he said.

Welgan said redundancies were added to the ship to increase reliability. Dual paths were created so the combat system could bypass any faults that may occur, he said. And a second antenna for satellite communications will be added to the ship soon to both eliminate blind spots and to have a backup in case one goes down.

The LCS’s reliance on an open architecture design and the use of commercial-off-the-shelf (COTS) hardware was key to the technology refresh effort. Combat Systems Officer Lt. Adam Beauchene said the ship has a centralized network called the Total Ship Computing Environment (TSCE), which already gave the LCS an advantage over legacy systems in that the COTS servers reduced cost and made it easier to get a replacement if one broke. During the drydocking period, about two and a half racks of servers were taken out and replaced with just a single server – more powerful, and only about three or four inches thick. Beauchene said that server upgrade alone took thousands of pounds off the ship.

Joe North, Lockheed Martin Vice President of Littoral Ships and Systems, told USNI News that the tech refresh was originally planned for 2012 but was pushed back due to Freedom’s deployment to Singapore. The combat system hardware that was on Freedom was purchased in the 2004 or 2005 timeframe, he said, and needed to be updated with newer, more efficient technology – exemplified by the server replacement. North said Freedom also got an updated version of the COMBATSS-21 software – a derivative of the Aegis Combat System – that puts it in line with the newer LCSs coming out of the Marinette Marine shipyard in Wisconsin.

Also during the maintenance and modernization period, the flight deck was repaved with new nonskid, industrial work was done to spruce up the ship, and the mission bay doors were altered to improve operations, Commanding Officer Cmdr. Michael Brasseur said. Previously, the doors would open to launch small boats or unmanned vehicles, but they dragged in the water, both putting stress on the doors and making it harder for the ship to reach top speeds. A new dutch door concept allows the bottom-most part to stay closed instead of dragging in the water.

“What’s been really phenomenal for our crew is we came in when the ship was wide open. All the tanks were open, everything was open because there was a lot of work being done,” Brasseur said, noting that the crew took command of the ship on Sept. 11, 2015, in the middle of the drydocking period.
“And we got to know the ship on a very kind of organic level, in a very personal way. I’ve been in every single space on this ship, and then when you put it back together and get it ready to go to sea it’s a deeper level of knowledge.”

The crew plans to take Freedom out on Friday for a two-day sea trial with the surface warfare mission package, providing an opportunity for the ship’s crew, the surface warfare mission package crew and the aviation detachment to practice together at sea for the first time. Later underways will help the team build proficiency and certify prior to their deployment, the details of which are not yet finalized. Under the LCS deployment construct, LCS crews stay together but are not tied to a particular ship. Three crews would support two ships, one of which would be deployed at any given time.