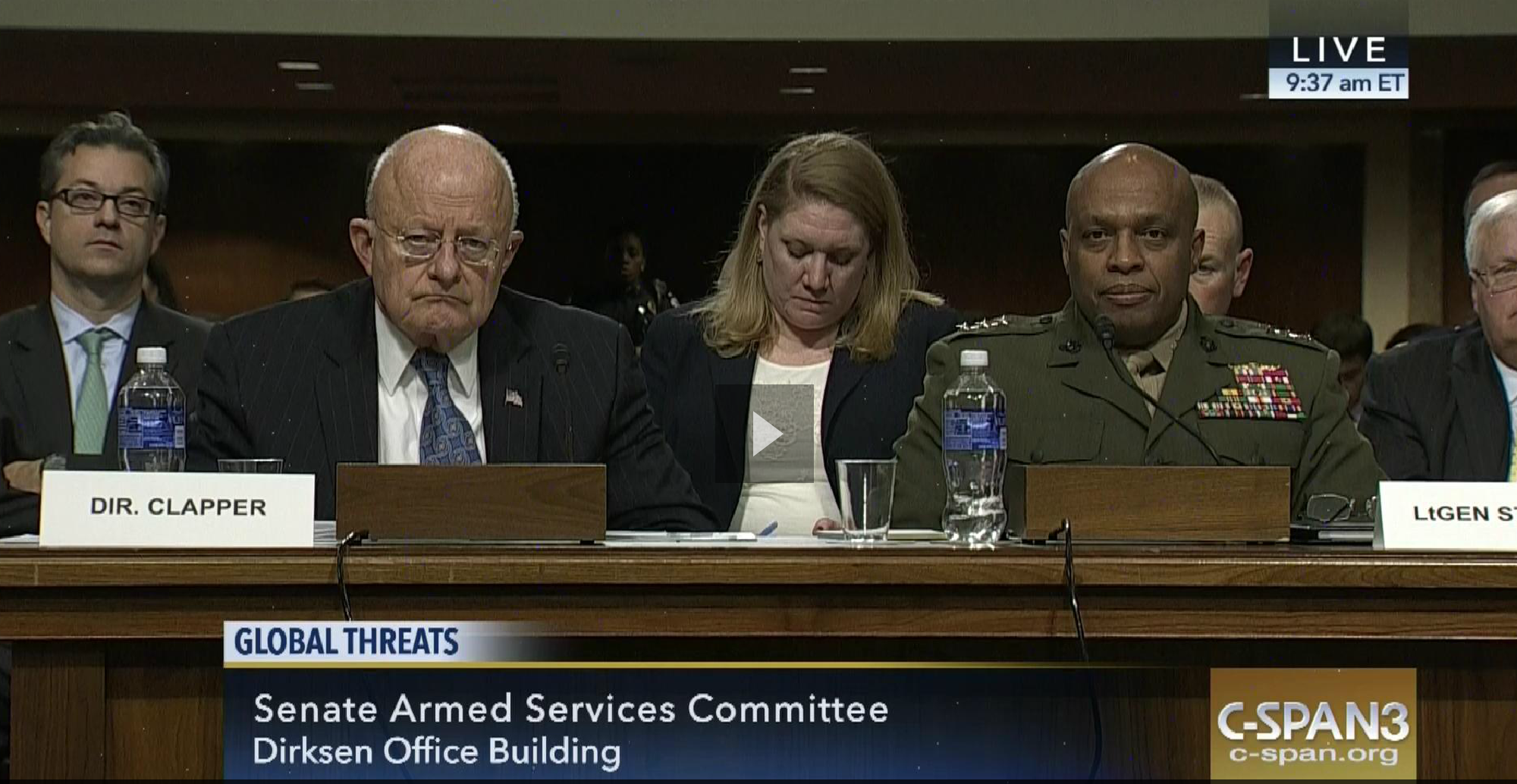 The “most significant” threat to the United States and its allies from a non-state actor remains the Islamic State, the U.S. National Intelligence director told the Senate Armed Services Committee Tuesday, citing its continued successful recruitment of foreign fighters and establishment of affiliates in places such as Libya.

The threat from the Islamic State in Iraq and Syria (ISIS or ISIL) “exceeds al Qaeda,” James Clapper said in his opening statement.

This was the committee’s first oversight hearing on threats and military posture as they affect the Fiscal Year 2017 budget, also released Tuesday.

Lt. Gen. Vincent Stewart, USMC, said, “If we are not supportive of the Sunni tribes [in fighting the Islamic State] they will die.” He added it was critical that the Baghdad administration dominated by Shiites include the Sunnis in the central government. Otherwise the tribes will continue to remain “on the fence or choose the least worse option” to include collaborating with the Islamic State.

Although he and Clapper expressed some optimism about events in Iraq, Stewart was “less optimistic in the near term” that Mosul, which before its fall to the Islamic State in 2014 had a population of more than 2.5 million people, will be retaken this year. “It’s an extensive operation” to drive Sunni extremists from a city of more than 650,000 residents by U.N. estimates.

When asked about last weekend’s announcement from the United Arab Emirates and Saudi Arabia about sending ground forces to fight the Islamic State, Clapper said the UAE had a “very, very capable military, but [it is] very small.” He added for the Saudis such an involvement “will be a challenge.”

Both UAE and Saudis are fighting Houthi—Iranian-backed Shiite rebels—in Yemen, where Clapper expected the military stalemate between the government-backed forces and rebels to continue.

Clapper said it was important to keep the military and economic pressure on the “mom-and-pop refineries” and banks helping finance the Islamic State.

Stewart said the Russian military involvement in Syria has left the regime of Bashar al Assad in a stronger position now than it was six months or a year ago, and he does not expect that to change at least “for a year or so.”

Clapper said that 250,000 people have died in the Syrian civil war and 4.4 million residents have been displaced by the fighting. He added that the Russians and Iranians, also allied with the Assad regime, are increasingly turning to proxies, such as Hezbollah from neighboring Lebanon, to do the fighting inside Syria.

While the Iranians and Russians are now in agreement to prop up the regime, Clapper said sometime in the future Moscow could be asking, “If not Assad, who?” in the existing Damascus government will succeed him and remain a Moscow ally.

When asked whether Iran was complying with the international agreement restricting its nuclear weapons program, Clapper said yes, but “the intelligence community” was in a “distrust and verify mode.” He answered a follow-up question by saying he is confident the intelligence community could detect a serious breach of the accord with “institutional humility.” He added later that Iran could continue develop “many other things,” such as centrifuges, that it could use when the accord reaches the end of its term.

As for the Iranian ballistic missile program, Clapper said he thought “it’s quite important that sanctions be enforced” for its continuing violations of U.N. resolutions covering these weapons as well as Iran’s continuing support of terrorist organizations. He added that Iran has test-launched 140 missiles since 2010, about half of those during the time when the nuclear agreement was being negotiated. Its most recent were a “deliberate message of defiance” of the U.N. resolutions. Ballistic missiles were not part of the nuclear negotiations.

Stewart said he does not expect Iran to immediately invest money received when sanctions were lifted for complying with the nuclear agreement on new weapons. He noted Tehran’s missile deployment program already “has all the ranges covered,” but in two to five years, it would likely buy Russian technology, such as air-defense systems now used in Syria.

On Russia itself, Clapper said, “Putin is the first leader since Stalin to expand Russia territory” by seizing Crimea and backing separatists in eastern Ukraine. Stewart said Russia military activity “continues at historic highs” from Syria to Ukraine to the Arctic.

Falling oil prices have had an impact inside Russian borders, Clapper said, noting the decline of the ruble’s value, unemployment, inflation, etc., but the country nonetheless is continuing an expansionist policy coupled with military modernization. He said Russia built its military modernization plan expecting oil to be selling at $50 barrel. It is selling now at about $28 a barrel.

While support for the Kremlin remains high, he said Russian leaders “are very concerned” about the economic impact affecting public opinion on the street and changing attitudes toward the ruling elite. Clapper said the Russian economy contracted by 4 percent of its gross domestic product last year.

“Russians fundamentally are paranoid about NATO [and] greatly concerned about being contained.” He added that with Moscow’s efforts to maintain great-power status co-equal to the United States, “we could be into another Cold War spiral.”

North Korea’s recent satellite launch and nuclear test raised questions from panel members over Pyongyang’s position as a proliferator of weapons of mass destruction to generate revenue. Clapper shared those concerns and said North Korea could be within months of re-starting a reactor that could produce enriched uranium.

He added, “I worry more about MANPADS [portable air defense systems that pose] a great threat to the aviation community.”

Russia and China pose the greatest threat to the United States in cyber warfare, Clapper said.

Stewart said China is continuing to project itself into the South China Sea and is continuing its military modernization program—particularly in air and maritime forces. He said Beijing has the “world’s largest and most comprehensive missile” program, which includes anti-carrier weapons and intermediate-range weapons cable of striking Guam.