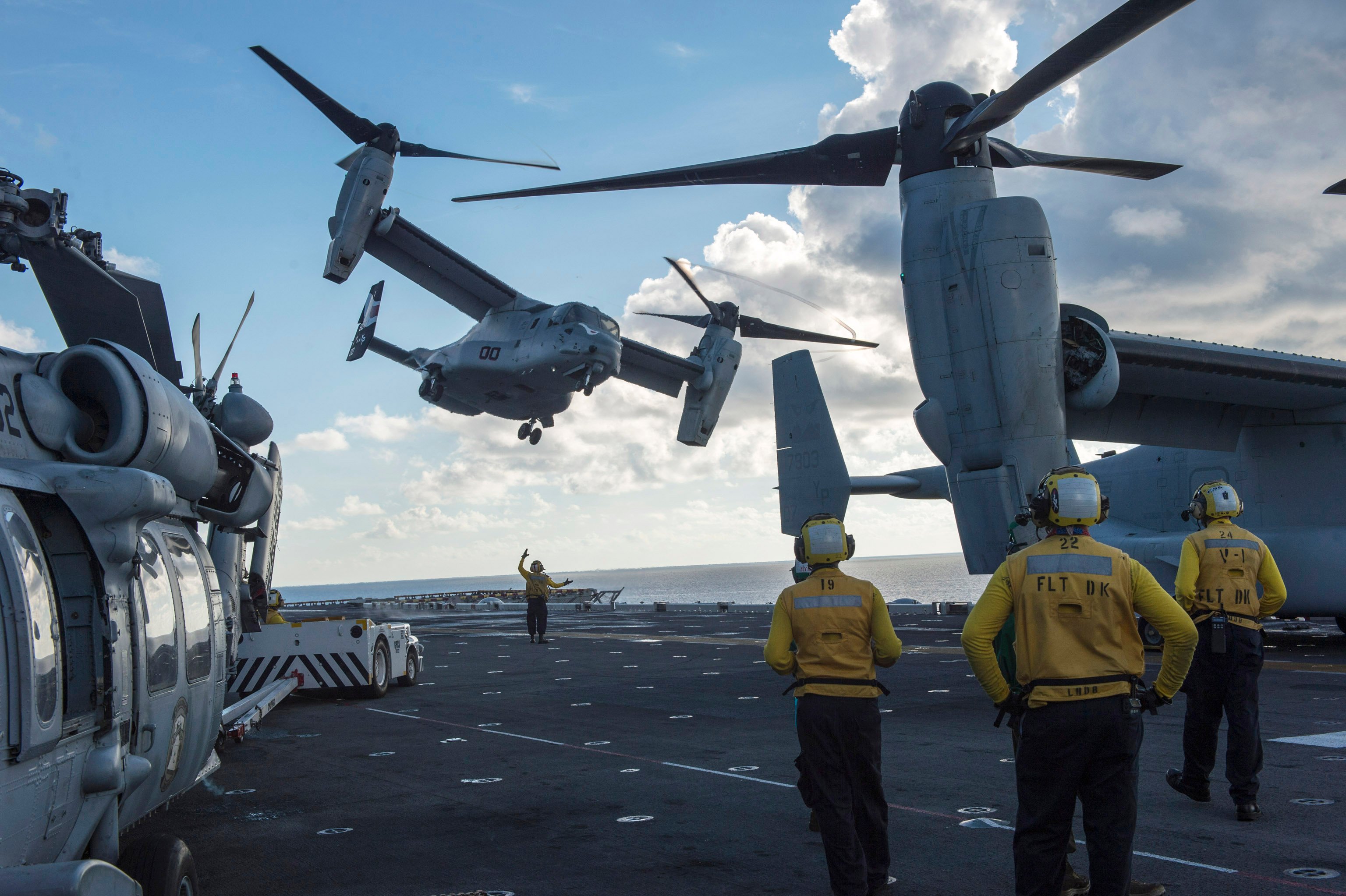 The Navy’s variant of the V-22 Osprey that will serve as the future carrier onboard delivery (COD) aircraft has an official designation: CMV-22B.

The Navy announced one year ago that it would buy the V-22 – which is already used by Air Force special operators and has revolutionized how the Marine Corps operates at sea and ashore. The COD mission is currently carried out by the Northrop Grumman C-2A Greyhound turboprop plane, which carriers people, mail, supplies and more to the aircraft carrier from shore facilities.

The Navy previously intended to host a competition to replace the C-2A with a similar fixed-wing aircraft, but last year’s decision to use the Osprey allows the Navy to take advantage of a hot production line and a mature logistics and training infrastructure. The V-22 has also operated off the flight deck of Military Sealift Command supply ships during exercises, and the Navy could invest in certifying the V-22 to land on and take off from the flight decks of destroyers and other surface ships, making the V-22 a more flexible choice than a conventional fixed-wing plane, according to the service.

USNI News understands that the C-2A may have had some advantages over the Bell-Boeing V-22, such as being able to fly at higher altitudes. However, early COD replacement efforts may have indicated that replacing the old plane would be costlier than originally expected.

The Marines call their variant the MV-22, and the Air Force variant is the CV-22. The Navy ultimately designated its variant using both designators. According to an Air Force primer on aircraft designators, the C stands for cargo and means the plane is “designed to carry heavy cargo, passengers, and/or medical patients.” The M stands for multimission and “identifies aircraft specially configured to support special operations.” And the V signifies a vertical-takeoff or short-takeoff fixed-wing plane, such as the AV-8B.

Over the past year, documents in the Navy and Defense Department have referred to the Navy’s Osprey variant as the HV-22 – with the H denoting a rotary-wing rather than fixed-wing aircraft. However, the H designator also implies a search and rescue aircraft, and though the Osprey could conceivably participate in search and rescue missions, that is not included in the COD mission set.

The “CMV” designation is meant to best reflect the nature of the COD mission, which, according to a statement from Naval Air Systems Command, “is to provide the Joint Force Maritime Component Commander with time-critical, long-range aerial logistics support by transporting personnel, mail and priority cargo from advance bases to the sea base.”

To accomplish this mission, the CMV-22B will be the same as the MV-22, plus an extended-range fuel system, a high-frequency beyond line of sight radio and a public address system in the back of the aircraft.

The Navy’s program of record originally called for 48 planes total, but the Navy has since determined it only needs to buy 44. The NAVAIR statement says production on the CMV-22B will begin in Fiscal Year 2018, and aircraft deliveries will begin in 2020.

The Navy will pursue the three changes it needs via engineering change proposals to the existing MV-22 design. Those ECPs are not yet under contract, USNI News understands, but are planned for FY 2016 and should be finalized in the coming months.