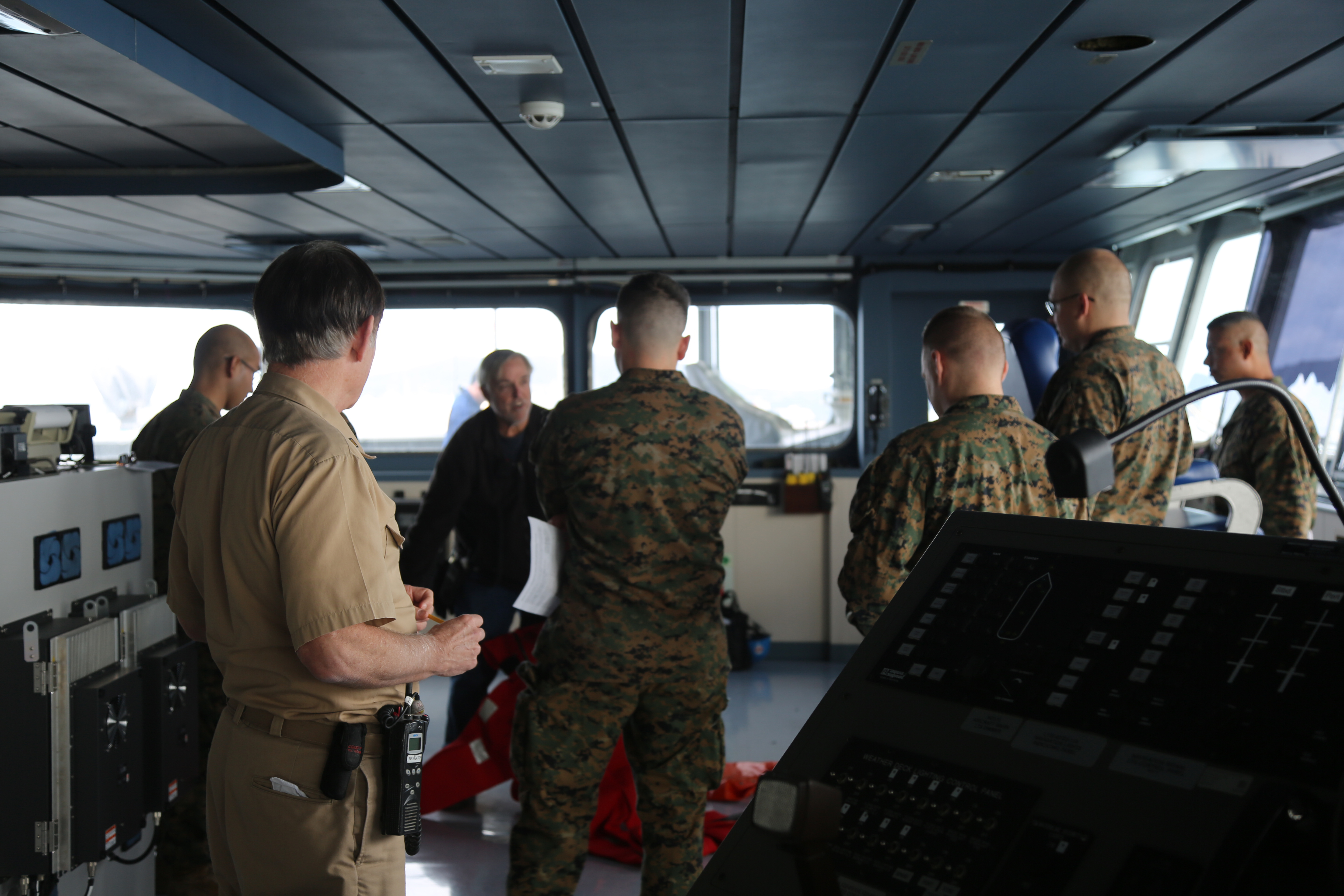 The 3rd Marine Division is exploring ways to not only put Marines infantry on non-traditional ships but to push those vessels into higher-level military operations, the division commanding general told USNI News.

Maj. Gen. Richard Simcock said in a Jan. 6 interview that he has been collaborating with the Commander of Task Force 73, Rear Adm. Charles Williams, to find opportunities to put Marines to sea on the assortment of ships CTF 73 commands out of Singapore – logistics ships, Littoral Combat Ships and more.

Primarily eyeing the Maritime Prepositioning Force ships, Simcock said “what we’re finding out now is, we have to use these resources outside their original design. We cannot afford to just let them sit and not be used. We are finding ways of using these ships to support the engagement that we’re doing throughout the region.”

In 2012, when Simcock served as the deputy commander of U.S. Marine Corps Forces Pacific, he put a company of about 200 infantry Marines on the cargo ship USNS Lewis and Clark (T-AKE-1) simply to see if Marines could sustain themselves during the nearly month-long exercise Coconut Grove in the Maldives using the ship as a seabase. Following the success of that experiment, the next year he put Marines back on sister ship USNS Sacagawea (T-AKE-2), along with MV-22 Ospreys and other parts of a traditional Marine Air-Ground Task Force (MAGTF), to push their ability to use the cargo ship during the exercise Balikatan in the Philippines.

In these previous cases, Marines were using the cargo ship to simulate lower-end operations, such as humanitarian relief efforts. Now, Simcock wants to see if the civilian-crewed Military Sealift Command ships could be useful in higher-end wartime operations.

At the end of December, Simcock sent a team of about six Marines from his 3rd Marine Division staff to USNS Matthew Perry (T-AKE-9) to look into the ship’s command and control capabilities and what space was available for the Marines to bring additional computer and communications gear.

“If we had to use a ship like the Matthew Perry, what assets were on it and what would we need to bring to it to increase its capability to be able to be used in a command and control configuration?” Simcock said, adding that the civilian mariners, like CTF 73 leadership, was very supportive of the opportunity to work together.

“These are not L-class amphibs, so we’re not doing forcible entry, we’re not doing the Iwo Jima kinds of things with these ships – however, there’s a lot of applicability to the warfighting spectrum towards the lower end that we can use these ships for,” he said of the Marines’ previous use for alternative platforms. “Now, the piece that I’m looking at right now is, how far can we push that envelop? How far can we take these ships – again, not L-class warships – how far can we get towards that higher end? Meaning, if they were second, third, fourth echelon level ships, could we still use them in conjunction with a higher-end operation like forcible entry? And that’s kind of what I’m looking at right now, how far can I push these ships with the capabilities they provide towards the higher end of the spectrum.

“Now there’s a line there I think, and I don’t know where that is, but it would be not prudent of me, the risk would be too high to push these things too fast, too close to the high end. I just don’t know where that line is right now,” Simcock said. But he said more Marines are thinking in this manner, and the progress in using MSC ships is clear over the past few years. Five years ago, discussions about where that line is would have been “way left,” but today the Navy and Marine Corps team is open to the kind of experiment he conducted last month. Simcock said he believes that the MSC ships – particularly if paired up with an L-class amphib – could provide more combat power in a wartime scenario than previously believed, and he is working with CTF 73 to identify more opportunities for experimentation.

“It’s something you want to play with before someone starts shooting at you, you don’t want to try to figure this stuff out when you’re no kidding involved in a real world operation,” Simcock said of the importance of experimenting now. “So that’s why we’re pushing so hard now, we have the time and opportunity to experiment with things and figure things out.”

In addition to working with CTF 73, Simcock said he’s also working with CTF 76 Commander Rear Adm. John Nowell to find times to put the division staff on the four forward-stationed amphibs meant to support the 31st MEU. While the MEU has continued to deploy despite the focus on land operations in Iraq and Afghanistan for so many years, Simcock said the Marine Expeditionary Brigade (MEB) and Marine Expeditionary Force (MEF) level capabilities need some rehearsing.

“If the balloon went up, there will be amphibs out here, more than the four that are currently forward deployed,” Simcock said. “There will be L-class ships that come from the East and West Coast. I need to know how to use those ships as soon as they get here.”