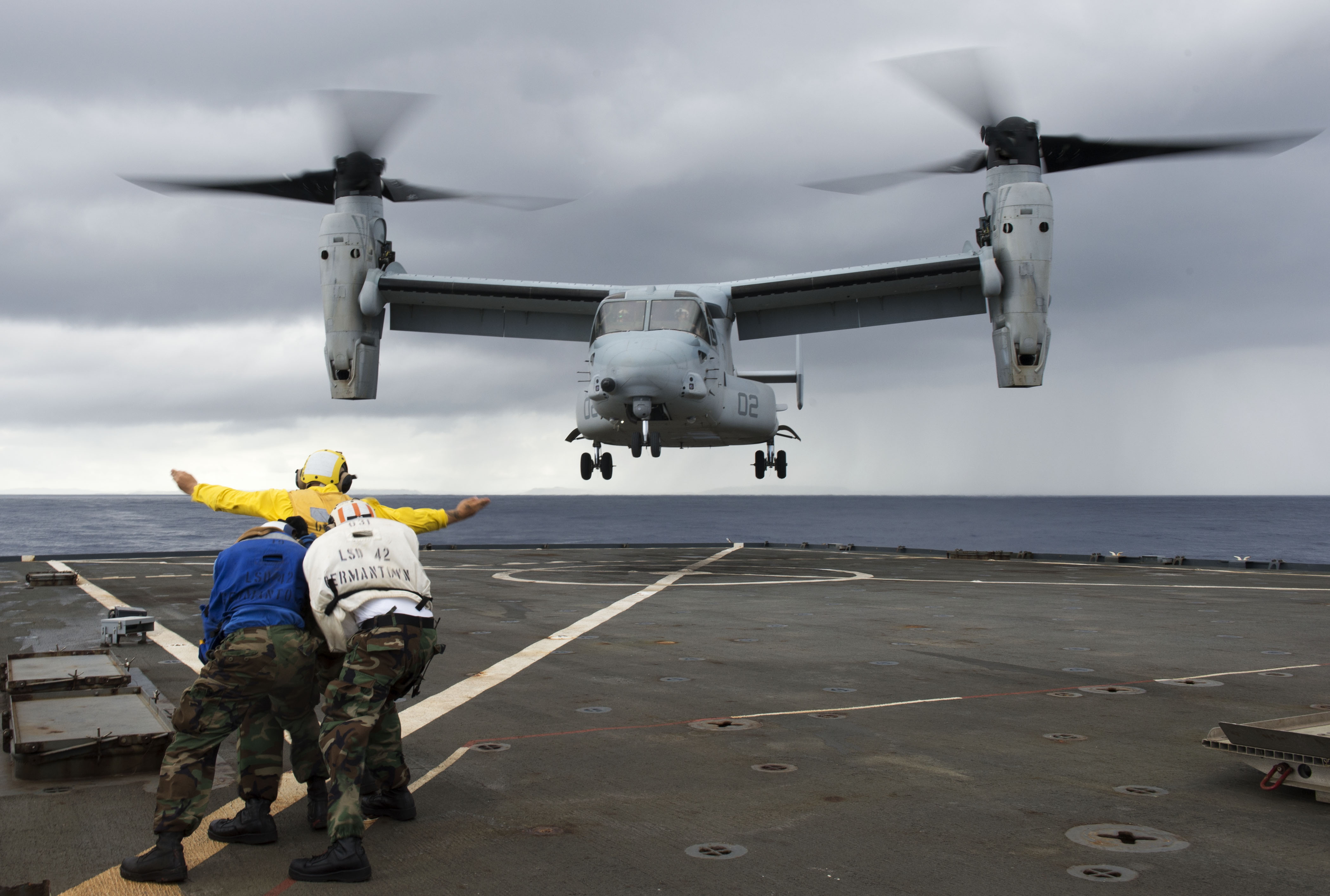 Sailors direct an MV-22 Osprey assigned to Marine Medium Tiltrotor Squadron (VMM) 265 as it lands on the flight deck of the amphibious dock landing ship USS Germantown (LSD 42) during exercise Blue Chromite off Okinawa in November 2014. US Navy photo.

The government of Okinawa sued Japan’s central government Dec. 25 in yet another escalation of the argument over relocating a U.S. Marine Corps air station.

The local government in Okinawa in December 2013 approved a relocation plan to bring about 25,000 American Marines from the current Marine Corps Air Station Futenma in the heavily populated southern tip of the island to Henoko, about an hour’s drive north in a less crowded area.

But after an election last fall, new governor Takeshi Onaga opposes the plan and tried over the summer to reverse the previous land reclamation approval.

The Ministry of Land, Infrastructure, Transport and Tourism ordered that Onaga reinstate approval, he rejected that order, and so last month the central government filed a lawsuit against him, according to the Associated Press. The ministry has since moved forward with the reclamation work.

“We’ll proceed with the construction to achieve the planned relocation as soon as possible,” Defense Minister Gen Nakatani said in Tokyo, according to an AP report.

Now, on Dec. 25, Onaga filed a lawsuit of his own, saying the central government illegally suspended the Okinawa prefecture’s cancellation of approval.

“We will do whatever it takes to stop the new Henoko base,” Onaga told a news conference in the prefectural capital of Naha, according to the AP report.
“Okinawa’s argument is legitimate, and I believe that it will be certainly understood.”

Onaga ran for office on the promise to block the development of a new site in Henoko. Many local residents want the Marines off their island and have complained about excessive noise and pollution from the air station, which is home to Bell-Boeing MV-22 Ospreys.

Onaga said he hopes the lawsuit will bring attention to the burden local residents face.

“Democracy and local self-determination in Japan are in severe condition,” Onaga said, according to the AP report.
“We want the rest of the world to know how the Japan-U.S. security treaty is affecting us.” Okinawa was under U.S. occupation for 27 years after Japan’s World War II defeat, and today it is the Japanese government that is forcing the unwanted relocation, he said.