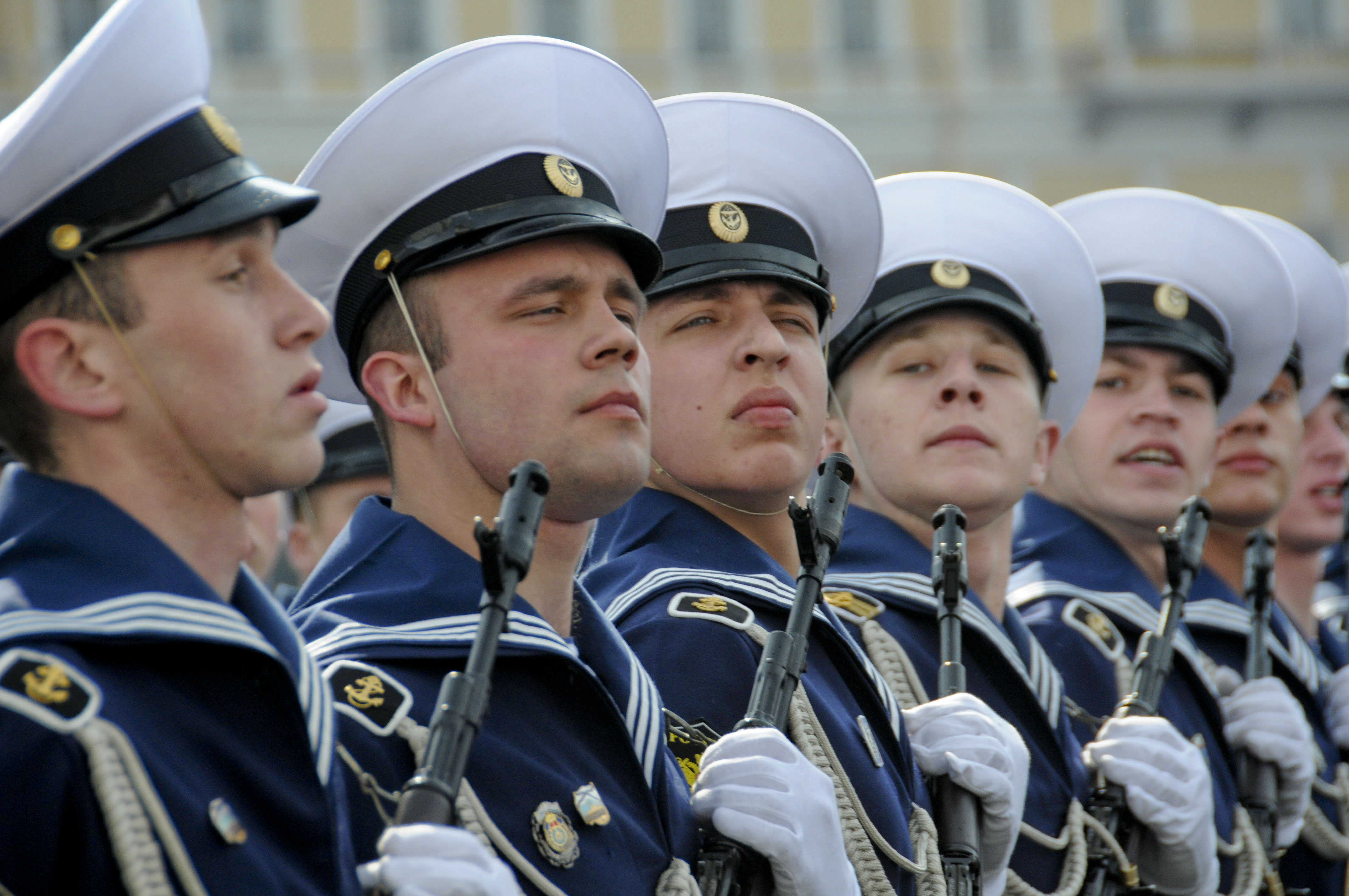 ST. PETERSBURG, Russian sailors march in formation during the opening ceremony of the 65th anniversary of the Victory in Europe Day parade in 2010. US Navy Photo.

The Russian Navy has operated more and further afield in the last year than it has in decades, but the current high operational tempo maybe difficult for the Russian’s to sustain over the long term.

According to a report from the TASS wire service, there are about 70 Russian ships operating around the world, quoting Russian Rear Adm. Viktor Kochemazov – the head of the navy’s training warfare said this week.

The Russian Navy is “now present almost everywhere,” he said.

“Some 70 warships of the Russian Navy are practically constantly present in the world ocean to designate and fulfill the tasks set by the command.”

Those deployments include “the Mediterranean basin, we have the operational task force there, ships of the Northern Fleet are practically constantly present in the Arctic region — both in the eastern and in the western zones,” Kochemazov said.
“Also, ships of the Pacific Fleet that during the year are on combat duty in the Gulf of Aden, are present in the Indian Ocean.”

His comments come a day ahead of Russia’s planned bilateral exercise with India and after a year of other high profile exercises – including the largest ever amphibious training between Russia and the Chinese.

Signs also point to the current surface action group off the coast of Syria remaining in the Eastern Mediterranean for the duration of Russia’s ongoing air campaign.

The increased tempo is a turnaround from just a few years ago of operations, Eric Wertheim, naval analyst and author of U.S. Naval Institute’s Combat Fleets of the World, told USNI News on Tuesday.

“If true, these statistics represent a remarkable turnaround for the Russian fleet in just a few years,” he said.

However how long the Russian Navy can keep up the pace is very much an open question.

“Their country has had to make tremendous sacrifices to enable this type of surge in military operations and capabilities,” Wertheim said.
“The more a fleet is used, the more experience it gains, but also the more it costs. Enhanced ops tempo requires enhanced maintenance down the line, and these efforts will require continued infusions of money.”

With a little less than 280 ships and submarines, the Russian Navy is – on a ledger – about the same size as the U.S. Navy’s battle force of 272 ships.

However, while there is parity in the numbers, it’s unclear how many of Russia’s ships are fully mission capable and how many remain mostly pier side with skeleton crews.

Logistics, maintenance and supply ability have atrophied in the last 20 years throughout the entire Russian military, as evident in the difficulty the Russian Air Force has had maintaining its own surge in operations.

Also the efficacy of Russian surface ships, especially surface combatants, are largely Cold War built and far from modern. For example, the surface action group off Syria is not fitted with Russia’s long-range Kalibir NK and a missile strike into Syria was conducted with corvettes with Russia’s Caspian Sea fleet.

While the Russian Navy has some new surface ships in production to refresh its surface fleet, it’s faced consistent problems effectively completing the ships in its construction queue.

An exemplar is Russia’s challenge to find maritime propulsion solutions for its new class of Admiral Grigorovich-class (Project 11356) and Admiral Gorshkov-class guided missile frigates (Project 22350) frigates. Following the seizure of the Crimean Peninsula, Ukraine – the Soviet heart of marine gas turbine technology – cut Russia off from promised gas turbines with no ready domestic replacement for the Russian Navy.

The one area in Russian naval power that approaches parity with the U.S. is attack and ballistic missile submarines operations and construction.

While the Russian surface fleet largely languished following the collapse of the Soviet Union, development of nuclear and conventional submarines has continued unabated.

A launch of a Russian guided land attack cruise missile on Oct. 7 from the Caspian Sea. Russian Ministry of Defense Image

U.S. Navy leaders — while loath to talk about any submarine operations — have hinted several times in the last few years that Russian submarines have remained active throughout the world.

Some analysts have concluded that highlighting the military prowess of Russia maybe less about intimidating potential rivals and more about providing venues to showoff defense material to potential customers.