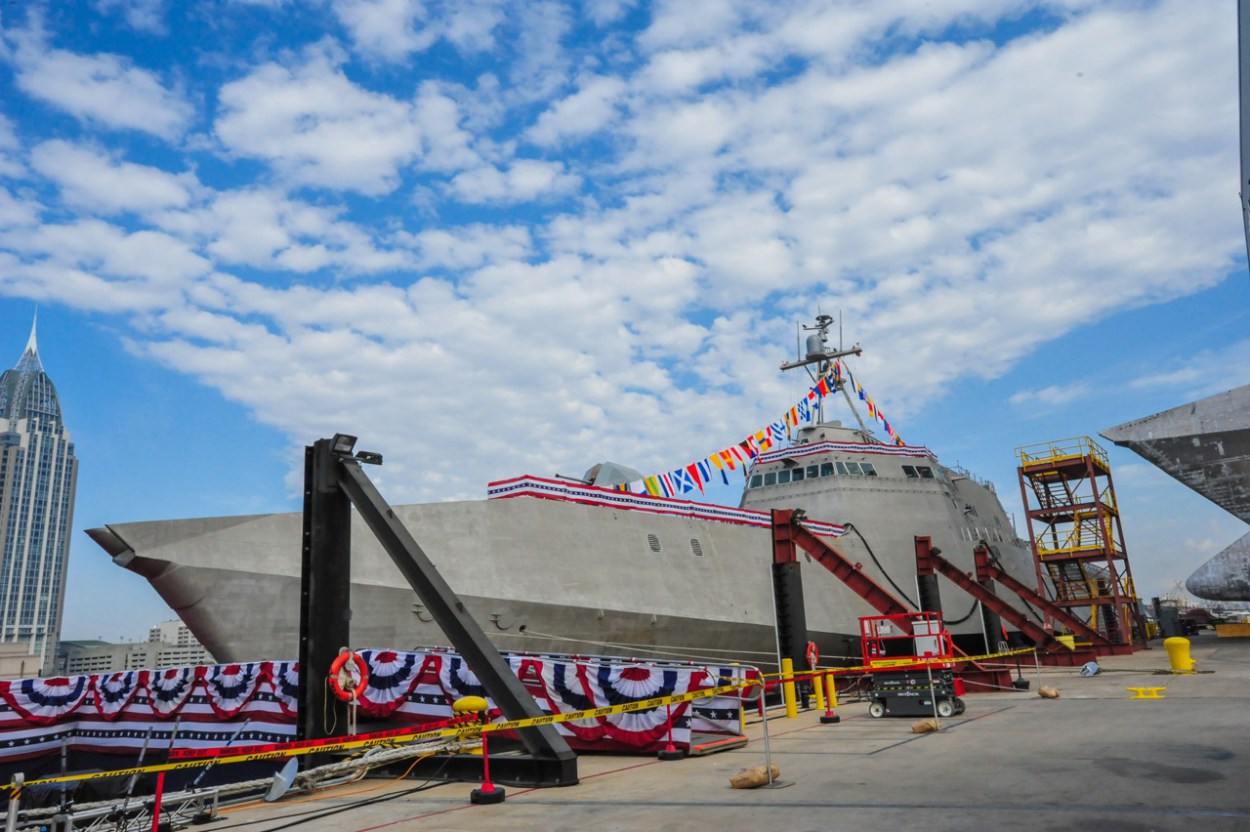 USS Jackson (LCS-6) during its christening ceremony at Austal USA shipyard in Mobile, Ala. in 2014. US Navy Photo

The sixth littoral combat ship – USS Jackson (LCS-6) – was commissioned on Saturday in a ceremony in Gulfport, Miss.

The aluminum Independence-class Jackson – named for the Mississippi’s capital and for former president Andrew Jackson – is the first ship to enter the Navy built entirely by Alabama shipyard Austal USA.

“The Jackson community stands proud to support the USS Jackson as she joins the battle ranks, exemplifying the essence of our great nation who remains unparalleled in the fight for justice and freedom,” Jackson mayor Tony Yarber said, according to local The Clarion Ledger newspaper.

Jackson is the first ship to deliver for Austal as part of a split 20-ship deal between Austal and Freedom-class (LCS-1) manufacturer Lockheed Martin issued by the service in 2010.

The first two ships in the class – USS Independence (LCS-2) and USS Coronado (LCS-4) – were built under contracts awarded to General Dynamics.

The ship had successfully completed its final set of acceptance trials in June ahead of the ship’s August delivery to the service.

Now that Jackson has commissioned it will transit to its new homeport at Naval Station San Diego, Calif.

The following is the complete Dec. 4, 2015 statement from the Navy on Jackson’s commissioning.

The Honorable Ray Mabus, Secretary of the Navy, will deliver the ceremony’s principal address. Dr. Katherine H. Cochran, daughter of Senator William T. Cochran of Mississippi, is serving as the ship’s sponsor. In a time-honored Navy tradition, she will give the order to “man our ship and bring her to life!”

“As we welcome USS Jackson to the fleet, we are reminded of the importance of the partnership between our Navy and our nation’s shipbuilding industry; a relationship that has brought us to the Jackson’s commissioning, a time-honored tradition during which the Sailors who make up her crew will breathe life into the hull of this great warship,” said Mabus. “We also celebrate the lasting bond this ship will share with the great people of Jackson, Mississippi, as it sails the globe, providing a presence that only our Navy and Marine Corps can maintain.”

While first to be named for the city of Jackson, two other ships have born the moniker of the city’s namesake AndrewJackson. Built at the Washington Navy Yard in 1832 for the United States Revenue Cutter Service, the first was a cutter that served along the east and gulf coasts discouraging smuggling operations, assisting distressed shipping, and conducting counter piracy operations. She remained in service for 33 years before being decommissioned and was sold after the Civil War in 1865.The second was one of the original “41 for Freedom” fleet ballistic missile submarines. USS Andrew Jackson (SSBN 619) was commissioned July 3, 1963. Following commissioning, President John F. Kennedy, embarked in USS Observation Island (EAG-154), observed Andrew Jackson launch a Polaris missile during shakedown training, just six days before the president was assassinated. Converted in 1973 to carry Poseidon missiles, the boat served 26 years conducting strategic deterrent patrols as part of the nation’s nuclear triad.

Jackson is a fast, agile, focused-mission platform designed for operation in near-shore environments yet capable of open-ocean operation. It is designed to defeat asymmetric “anti-access” threats such as mines, quiet diesel submarines and fast surface craft.

The LCS class consists of two variants, the Freedom variant and the Independence variant – designed and built by two industry teams. The Freedom variant team is led by Lockheed Martin (for the odd-numbered hulls, e.g. LCS 1). The Independence variant team is led by Austal USA (for LCS 6 and the subsequent even-numbered hulls) and was originally led by General Dynamics, Bath Iron Works (LCS 2 and LCS 4).

The LCS seaframes will be outfitted with reconfigurable payloads, called mission modules (made up of mission systems and support equipment), which can be changed quickly. These modules combine with crew detachments and aviation assets to become complete mission packages, which will deploy manned and unmanned vehicles and sensors in support of mine countermeasures, anti-submarine warfare, or surface warfare missions.