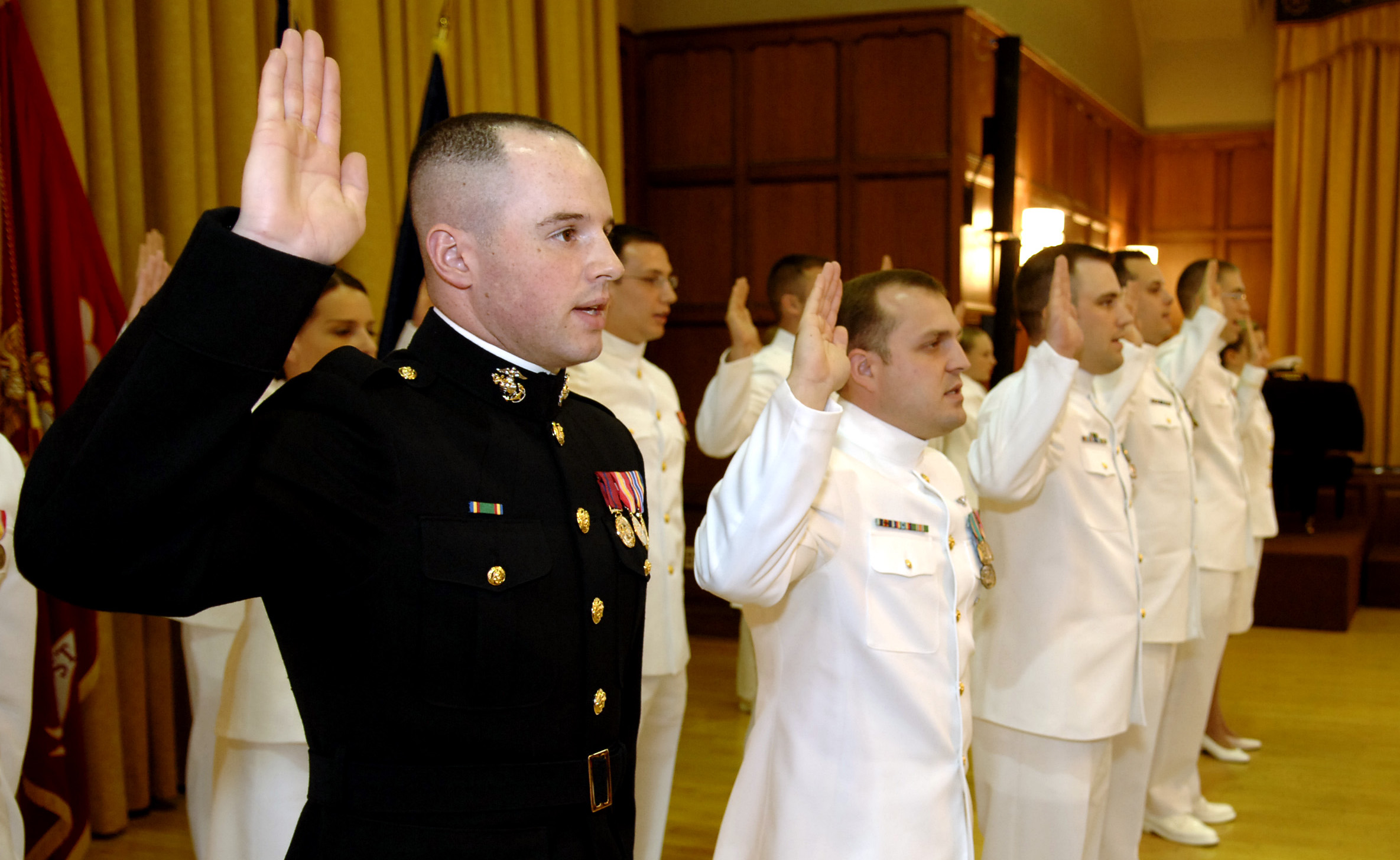 2nd Lt. Mike White, recites the oath of office from then Secretary of the Navy (SECNAV), the Honorable Dr. Donald C. Winter during a commissioning ceremony in 2007. US Navy Photo

A previous version of the this post appeared without the correct author byline. It has been amended.

When looking to the size and shape of the future force, retired Adm. Gary Roughead, recommend to the Senate Armed Services Committee “to hold constant the number of active-duty personnel” and look first to reshape the reserve components, Defense Department civilians and contractors before making changes.

This would be a change from “the traditional look at cutting the size of the active force” first, the former chief of naval operations said.

Time and again during the hearing the overhauling of the Defense Officer Personnel Management Act, (DOPMA) revisiting the requirements of joint duty in the Goldwater-Nichols Act and the use and number of contractors were placed on the table.
Chair Sen. John McCain, (R.-Ariz.), said he intended to call more hearings on the mix of active duty, reserve components, Department of Defense civilians and contractors five, 10, 15 years from now.

“None of these issues are simple,” he said.

As an example of the complexity of personnel issues, Roughead said there was a need to change the current up-and-out policy of the personnel management act that forces service members to rise in the ranks or leave the military.

But Bernard Rostker, a former Pentagon personnel chief, agreed that the act’s one-size-fits all structure makes “no sense” in some career fields, but the up-and-out concept made sense for most career fields, especially the combat arms, because “it is the next generation and the one after that that will carry the right in the future.”

David Chu, who also served as the department’s personnel chief, said under the present officer management act, “We’re grooming all officers to be chief of staff. …That’s not going to happen.”

Addressing the issue of retirement at 30 years of service for almost all senior officers, Robert Hale, a former Defense Department comptroller, said for specialists serving in the acquisition corps in their early 50s, “doesn’t make much sense.”

“We ought to look at varying career lengths,” Chu said for officers in specialties such as medical, chaplains, acquisition, cyber and some others. He added that since officer management is covered by statute revisiting enlisted promotion policy, covered by policy, first might be best.

On unexpected consequences of Goldwater-Nichols, Roughead cited the bloating of joint headquarters staff. But he added Congress needed to retain “the legislative hammer on the Defense Department” for joint duty or the services would “retreat back to more tribal behavior.”

He said Congress also should look at what point in a career should the joint requirement begin weighing the development of an officer’s warfighting skills in his or her service. He did not favor changing the role of the chairman of the Joint Chiefs of Staff from an advisory one and the creation of a general staff, as witnesses at earlier hearings suggested.

Chu said one way to look at meeting the joint requirement is to use questioning in the nomination process to determine an officer’s perspective and qualifications to serve at a higher rank.

Roughead and the others agreed that the personnel management act and Goldwater-Nichols needed to be examined together.

Hale said there would be value in having a Goldwater-Nichols act covering Defense Department civilians to provide “rotational experience for our civilian leaders.”

While saying there is a need to reduce the size of the civilian work force but still support the warfighter, he said current policies slow down the hiring process and allow poor performers to remain in place. Roughead called for a return to the National Service Personnel System “where merit mattered, not longevity.”

Chu said restoring civilian pay bands would be important to department civilians because they “would set a standard and keep to that standard” on compensation.

“A few more carrots” are needed for civilian workers, Hale said, such as pay increases for senior executive service and eligibility for special awards, as well as recognition of their contributions from leaders and Congress.

Chu described contractors as “a safety valve” the Pentagon uses to meet immediate needs. Hale said one reason for the growth in their numbers over the last 14 years were the limits set by Congress on the number of active-duty personnel and Department of Defense civilians.