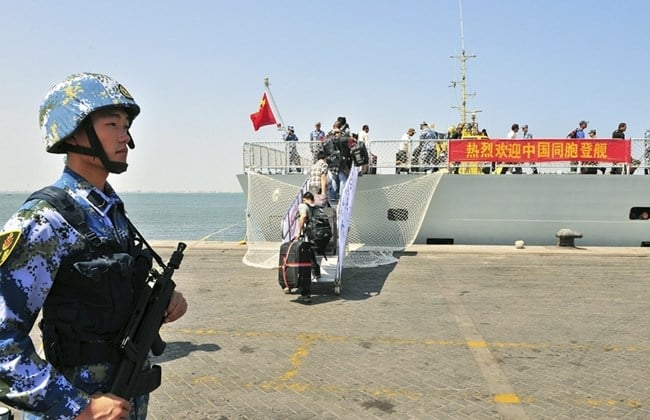 A PLAN ship operating in Africa in March of 2015. Reuters Photo

The head of U.S. Africa Command confirmed China is establishing a forward military base in Djibouti — joining French, Japanese and U.S. installations already in the country.

“They are going to build a base in Djibouti, so that will be their first military location in Africa,” he said according to The Hill newspaper.

Rodriguez confirmation of the Chinese installation follows months of reports Beijing was seeking a foothold in Africa.

President Ismaïl Omar Guelleh confirmed China was looking to join the other countries with a military presence in the country and was in talks earlier this year.

“France’s presence is old, and the Americans found that the position of Djibouti could help in the fight against terrorism in the region,” Guelleh told Agence France-Presse via Stars and Stripes.
“The Japanese want to protect themselves from piracy, and now the Chinese also want to protect their interests, and they are welcome.”
The PLAN has long operated in the region as part of the ongoing international anti-piracy patrols off the coast of Somalia.

“Djibouti has been a critical cog in the PLAN’s now [years-long] anti-piracy deployment off the Horn of Africa. Chinese naval vessels have reportedly visited the port [of Obock] more than 50 times since the mission began in December 2008,” read a July China SignPost blog.
“China cemented the diplomatic foundation for basing with a February 2014 meeting between President Guelleh and General Chang Wanquan, after which the two countries signed a defense and security pact.”

Obock is in the northern part of the country 30 miles Northeast across the Gulf of Tadjoura from the U.S. Naval Expeditionary Base at Camp Lemonnier. The other location for the base could be the port of Doraleh — much closer to the American base.

For its part, China has been consistently coy on its intentions in Djibouti but the move to construct a base falls in line with the PLAN’s global ambitions.

In the last year, the PLAN has expanded its global operations.

Chinese ships have operated in both the Black Sea, the Bering Sea for move the first time and a surface action group is currently in the midst on a round-the-world tour.

The Chinese has also conducted bilateral operations with the U.S., Iran and Russia in the same timeframe.