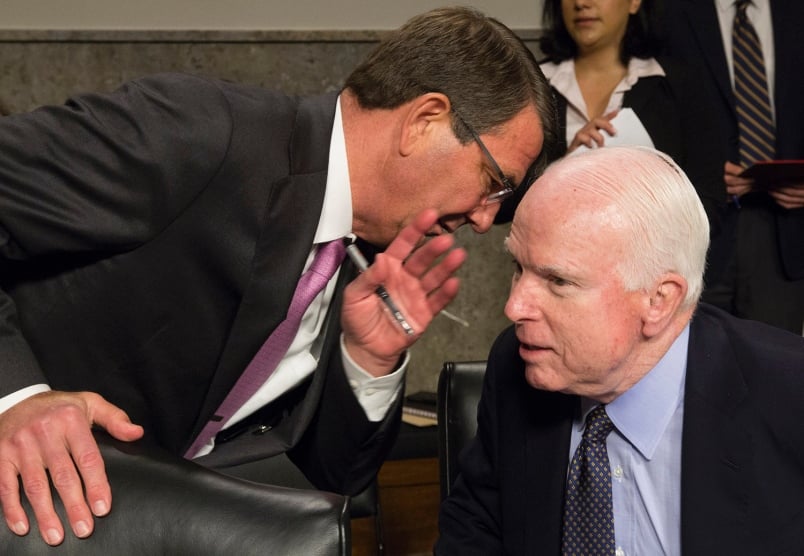 The chairman of the Senate Armed Services Committee has asked Secretary of Defense Ash Carter for more details on last month’s U.S. freedom of navigation (FON) mission in the South China Sea, according to a Monday letter obtained by USNI News.

The letter, signed by SASC chair Sen. John McCain (R-Ariz.), called on the DoD to publically outline the goals of the Oct. 27 FON operation in which guided missile destroyer USS Lassen (DDG-82) came within 12 nautical miles of a Chinese installation on Subi Reef in the South China Sea.

“I believe it is critical that the Department of Defense publicly clarify, to the greatest extent possible, the legal intent behind this operation and any future operations of a similar nature,” read the letter.

Chief in a list of requests for an was explanation of, “what excessive claim(s) was the Lassen operation intended to challenge?”

The Department of Defense and the Navy has been under White House instructions not to provide details of Lassen’s mission publically which has led to a number of high level press leaks that only gave partial information on the mission.

“We expect to answer the letter in an appropriate manner” but that “the Department will not be able to provide any information on the Secretary’s future correspondence with [McCain],” a Pentagon spokesman told USNI News in a Tuesday statement.

The question as to what Lassen did or didn’t do during the first U.S. FON op past a Chinese installation on an artificial island led to a lack of clarity last week between maritime analysts, legal experts and legislators, said Gregory Poling with the Center for Strategic and International Studies Asian Maritime Transparency Initiative.

It took more than a week of stringing together leaks and press reports to come up with the loose consensus that Lassen made about a 72 nautical mile FON op amidst the Spratly Islands in the South China Sea challenging not only Chinese claim of requiring prior notification before entering its territory but also Vietnamese and Filipino holdings and conducted itself under the rules of “innocent passage,” sources told USNI News.

The likeliest reason why Lassen conducted an innocent passage past Subi Reef was outlined in a piece The National Interest.

“Subi Reef is located within 12 nautical miles of Sandy Cay (not to be confused with Sand Cay, which is occupied by Vietnam and does not lie within 12 nm of Subi Reef), and can be used as a base point for Sandy Cay’s territorial sea,” read a Nov. 6 post on The National Interest.
“Sandy Cay is unoccupied, but is claimed by China, the Philippines, Vietnam and Taiwan. Nonetheless, there is a 12 nautical mile territorial sea around Subi Reef, generated by Sandy Cay. To whom the territorial sea belongs to is irrelevant.”

Gregory Poling with the Center for Strategic and International Studies told USNI News on Tuesday, “it is entirely reasonable for McCain to have more specificity… at this point, I think the analysts in town that are up to their necks in maritime law are up to speed. [But] I don’t think anyone else understands what happened.”