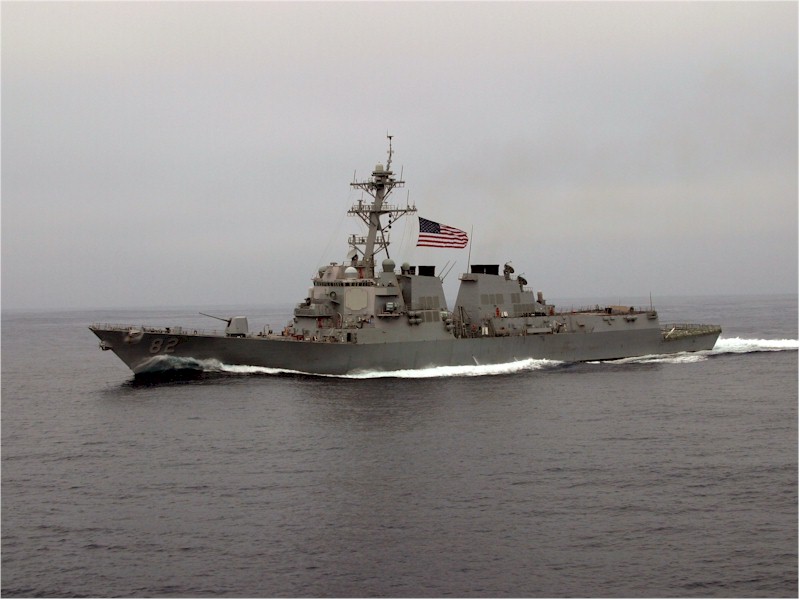 Last week the United States sent a guided missile destroyer past a Chinese artificial island to challenge questionable claims in the South China Sea, but confusion still reigns from Washington, D.C., to the Western Pacific as to exactly what message was supposed to be transmitted.

USS Lassen (DDG-82) made about a 72 nautical mile loop around Chinese, Vietnamese and Filipino territorial holdings in the Spratly Islands as part of the longstanding U.S. freedom of navigation (FON) program, in conjunction with a nearby P-8A Poseidon maritime surveillance aircraft.

In a Thursday interview with the media on board the USS Theodore Roosevelt (CVN-71)—under way in the South China Sea—Lassen’s commander acknowledged the destroyer went within about six miles of the Chinese artificial island on Subi Reef.

“We went by Subi Reef, for sure,” Cmdr. Robert C. Francis Jr. told reporters.
Beyond limited comments, the White House has placed tight controls on both the Navy and the Pentagon on releasing details of the operation—the first South China Sea FON operation past the Chinese artificial islands since 2012—with information trickling out in leaks to trade and the popular press with no complete explanation of American intent.

Multiple sources confirmed to USNI News Lassen’s mission was to enter the 12 nautical mile bubble around Subi Reef without the prior notification the Chinese have asked for around their artificial islands in the South China Sea—testing the freedom of navigation rights in territories the United States views as an international common.

Subi Reef, in particular, was chosen as the Chinese installation since it was built on a low-tide elevation, which is not recognized by maritime law as a feature that can command a territorial sea, several sources told USNI News.

However, Lassen conducted the transit with the characteristics of an “innocent passage,” a defense official and others familiar with the operation told USNI News on Monday.

Under the rules of innocent passage, a warship can enter another country’s territorial waters unannounced as long as the ship does not undertake any military operations, such as activating fire control radars, running drills, launching helicopters or transmitting propaganda.

While technically true—as a low tide elevation at Subi Reef doesn’t have a territorial sea from a U.S. perspective and an innocent passage transit would not be applicable—a transit that looks like an innocent passage could arguably be used in a legal argument and the court of world opinion as an implicit recognition of Chinese sovereignty of Subi Reef.

One explanation given to USNI News was Lassen’s subtle passage in the Spratlys was not in deference to Subi Reef but instead to nearby longstanding holdings of Vietnam and the Philippines that do command a 12 nautical mile territorial sea.

If the explanation is accurate, the feature that required the innocent passage transit was likely Thitu Island, the second largest island in the Spratlys, which has been controlled by the Philippines since the 1970s and home to one of its naval stations. Nearby, Vietnam’s Sand Cay also has its own territorial boundary.

Depending on how a distance measurement is taken, Thitu Island—also called Pagasa—is about 12 to 15 nautical miles from the Chinese installation on Subi Reef.

Within the past week, the ambiguity surrounding the nature of the operation has raised questions in legal circles and internationally as to what the United States attempted to communicate through FON ops and how China could use the action in the future.

“If it transpires that last week’s U.S. Navy Spratlys mission is regarded officially as innocent passage then much of the legal impact will have been blunted for this and future [FON ops], which unnamed U.S. defense officials have said since are likely to be conducted ‘about twice’ per quarter,” read a post in the Interpreter, a blog from Australian’s Lowy Institute for International Policy.

A Thursday post with Lawfare said the lack of clarity is “a problem for U.S. foreign policy and for international law . . . if allowed to harden, the widespread belief that [Lassen] conducted innocent passage would be extremely damaging; indeed, it could make the operation worse than having done nothing at all.”

While the Chinese response to Lassen’s transit was forceful, watchers noted the language in the myriad statements condemning the operation was chosen carefully.
Lack of Clarity

Regardless of the Chinese interpretation, widespread conjecture and lack of clarity surrounding the mission is arguably antithetical to the root of FON ops.

The operations under the U.S. FON program, begun in the 1970s, are designed to “make crystal clear determination” of what national claim in opposition to international law a ship or aircraft is contesting, Gregory Poling of the Center for Strategic and International Studies told USNI News on Wednesday.

Poling maintained that the FON op was a necessary because of China’s persistence in enforcing claims that ran counter to international law.

“We did a freedom of navigation operation and that is important and needed,” he said.
“China has a bevy of restrictions that it is trying to place on the regular operation of ships and overflight [in the region].”

However, not explaining the operation publically is unhelpful, Poling said.

“Allowing this kind of confusion is counterproductive because now it is unclear exactly what we were contesting,” he said.