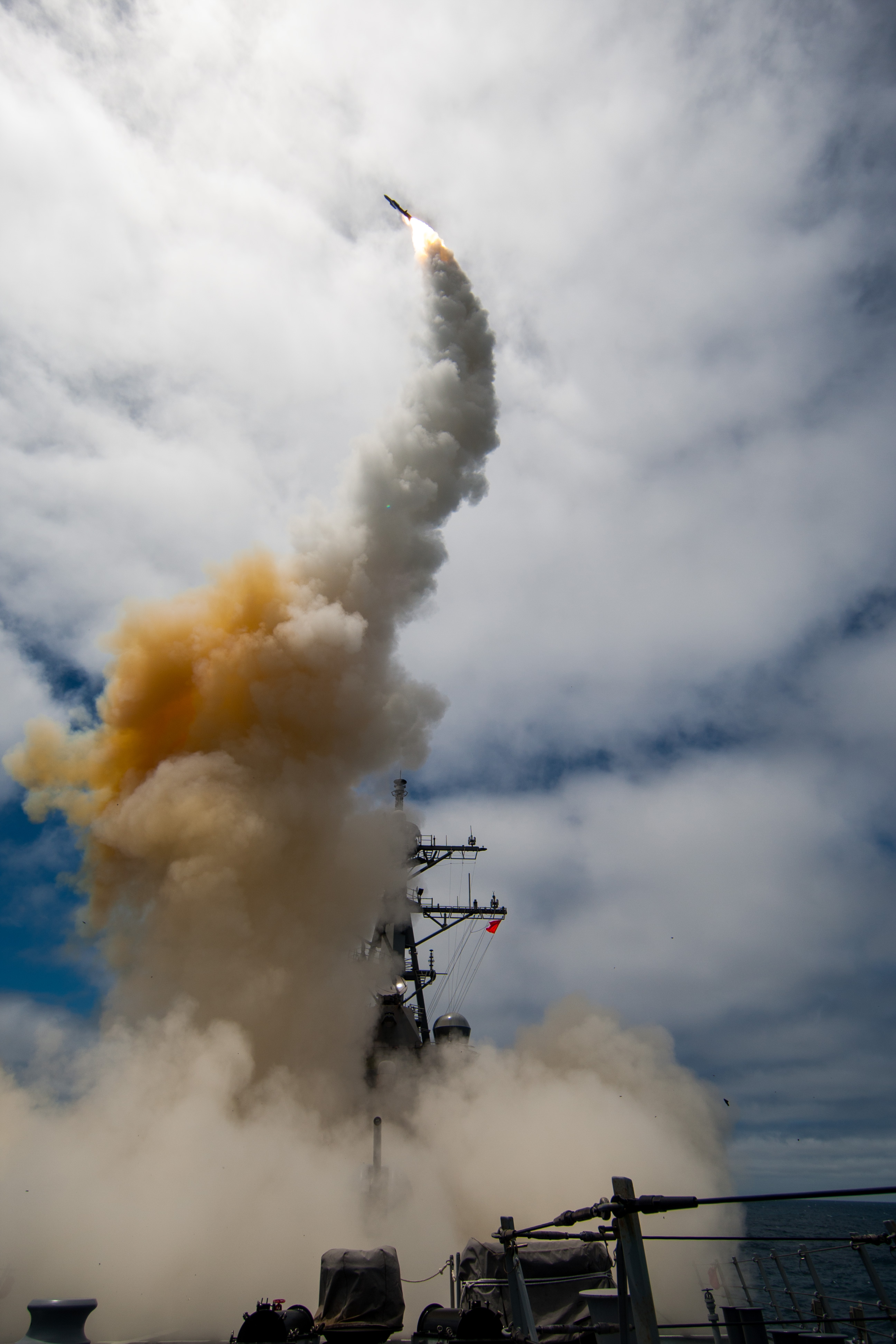 The Navy’s surface ship weapons office is developing software to bring additional mission sets to the Standard Missile-6 surface-to-air missile, which may be ready for fielding in the next year or two.

Capt. Michael Ladner, program manager of the surface ship weapons office in the Program Executive Office for Integrated Warfare Systems (PEO IWS 3.0), told USNI News that there are several new missions that could be added to SM-6 – beyond its advertised capability of air defense against manned and unmanned aircraft and cruise missiles – through software-only upgrades.

“Our focus in IWS 3.0, in surface ship weapons, has been, how do we go find opportunities to take advantage of existing capability in the missiles above and beyond what they were initially required to go do, to see if we could provide an affordable capability faster to the fleet by taking advantage again of the capabilities already in the missiles [and adding] those new mission sets,” he said in an Oct. 26 interview.
“Of course the new missions are classified, but we are taking advantage above what was originally intended for these missiles to go do.”

Ladner said he could not discuss how many new missions sets he was looking at or characterize where they fit in with cruiser and destroyer operations, but he said that making SM-6 a multimission missile fits in nicely with the Navy’s new “focus on distributed lethality and shifting to an offensive capability to counter our adversaries’ [anti-access/area-denial] capabilities.”

The first batch of new mission sets would be incorporated into the SM-6 production via an engineering change proposal, Ladner said. Future missions could be added on separately if needed, but he said he’s eyeing a few now that could be developed and tested within a year or two.

The software for each new mission would go through rigorous testing – hundreds of thousands of runs using modeling and simulation, plus land-based testing, lab analysis and ultimately flight test demonstrations.

“That’s a lot of effort that we’re trying to do quickly,” Ladner said.
“But you’re talking a year or two to bring new missions to an existing inventory, as opposed to a new development program. Our focus is to provide more capability into the existing inventory without buying new missiles.”

And thanks to an effort started more than a decade ago, backfitting existing missiles with the new software could take just a matter of months instead of years. When the SM-6 program began in 2004, the program office decided to simultaneously pursue a reprogramming capability for the missiles. The Common Munitions Built-in Test (BIT) Reprogramming Equipment (CMBRE) capability would allow Ladner’s office to take the new software and rapidly install it in the missiles already in the fleet.

“Right now our support model is missiles go out to the field, go out on ships or to ammunition stations for a certain period of time, and then they cycle back for testing again – we need to monitor to make sure they’re working,” Ladner said.”
“When they come back for that opportunity, we would upload the newest software. What I want to do, and what we the Navy are doing is pursuing this CMBRE capability, which will allow me to push that reprogramming capability out to the field, either onboard ships or out at ammunition stations, to allow me to rapidly go put new software into the entire inventory.”

Under the old operating model, it could take five years to wait for all the missiles on ships and at ammo stations to cycle back for recertification. With CMBRE, however, Ladner said “it all depends on how many CMBRE pieces of test equipment I have, how many different copies of it I have and how fast I can get them to the ships, but the ideal would be I could get it all done within the same year, if not the same quarter, and get out to every missile and reprogram them all to the latest capability.”

And if new mission requirements came down from the chief of naval operations, the whole process is repeatable. Ladner said the limiting factor is the computing infrastructure on the missile. His office is working with Standard Missile manufacturer Raytheon, academia and Navy warfare centers to fully understand how much margin there is to exploit, though he said that at some point the Navy would likely need to put new computer chips on the missiles for obsolescence management or as a planned processor improvement project – and those new chips would have greater capabilities and allow for even more software upgrades in the future.

Ladner said the SM-6 program wouldn’t be a catch-all for all surface-launched missile needs but could prove both useful and cost-efficient for the Navy.

“If I can take advantage of fielding capability faster with existing inventory, I think that’s a great benefit to the Navy,” he said.
“However, if the Navy has a new requirement or a new ship and they define a new requirement, we’re not going to make SM-6 be the only missile in the Navy. The advantage, though, is it’s a very capable weapon and it goes on all of our cruisers and destroyers, and it puts a lot of capability out there – it enhances the capability they already have with the new missions. But I’m not looking to compete against every other type of surface-to-air missile or surface-launched missile out there.”

The SM-6 program reached initial operational capability about a year ago and has already delivered about 200 rounds to the fleet out of a total program of record of 1,800. Ladner said those missiles can be used on legacy Aegis Combat System baselines, or about 75 percent of the ships deployed today. He is working with the Aegis program office to test SM-6 on the new Aegis Baseline 9 and has completed six of the 19 flight tests required. After completing the remaining tests – hopefully in about six months, he said – SM-6 will be able to be fired from all cruisers and destroyers in the U.S. Navy fleet.

Ladner is also hoping to see the SM-6 deployed internationally. He said about six countries are actively interested in the missile and are seeking more information, though none have formally opened a Foreign Military Sales case yet.

“We’ve received several request for information and availability,” Ladner said.
“We are very pro-FMS for SM-6, we’ve received a lot of requests and we’re waiting on the next step in that FMS procurement process of then formalizing their request and funding to go procure.”