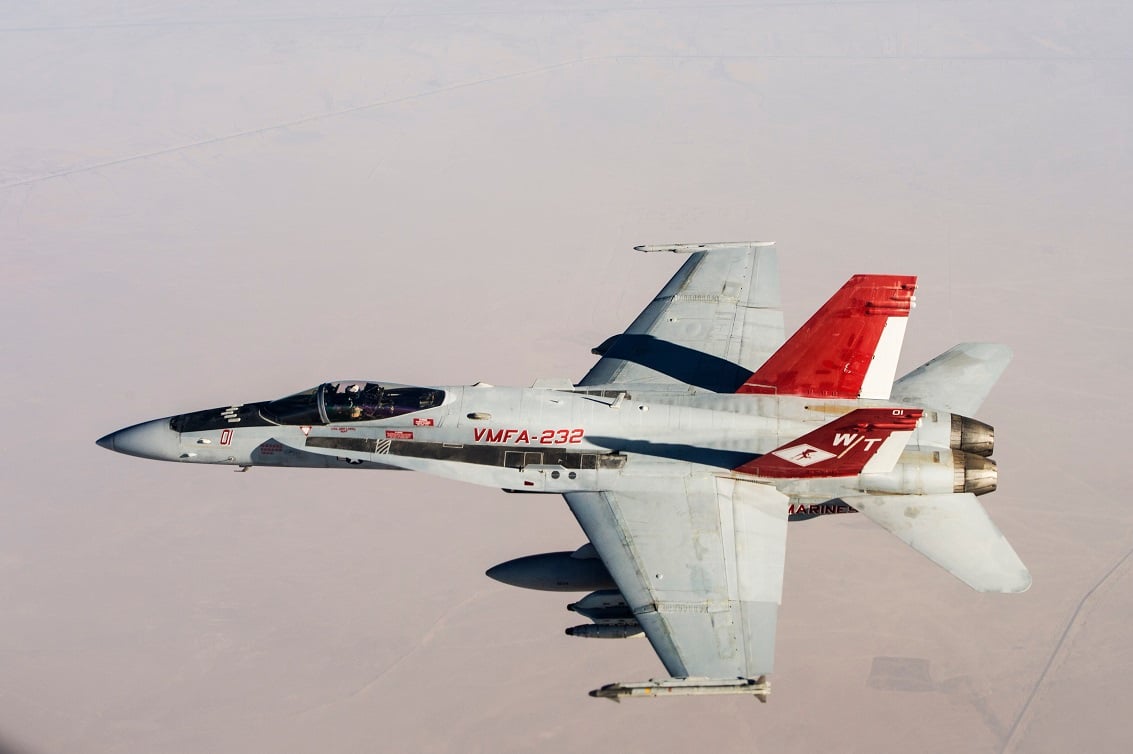 This post has been updated to include additional information from the U.S Marine Corps and U.S. Air Force.

A Marine Corps fighter pilot died when an F/A-18C Hornet crashed near RAF Lakenheath in Suffolk, England on Wednesday morning, the service confirmed.

British media reported this morning that the single-seater crashed in farmland near Redmere, northwest of the base, and was returning to the United States via the United Kingdom after a deployment to the Middle East. Local police confirmed to British media that the pilot was killed. The Telegraph wrote that the plane was one of six flying together and failed to connect with a tanker for aerial refueling after leaving the air force base.

“Response efforts are under way and the incident is currently under investigation,” read a Wednesday statement from U.S. Marine Forces Europe.

Marine Corps spokeswoman 1st Lt. Sarah Burns told USNI News that the Marines are still looking into the circumstances of the crash, including whether the pilot ejected or not. She said the crash happened at 5:30 a.m. Eastern Daylight Time, or about 10:30 a.m. local time, and the plane was from Marine Fighter Attack Squadron (VMFA) 232, part of the 3rd Marine Aircraft Wing out of Marine Corps Air Station Miramar in California.

The VMFA-232 was assigned to Special Purpose Marine Air-Ground Task Force—Crisis Response—Central Command and was part of the Operation Inherent Resolve preforming airstrikes against Islamic State in Iraq and Syria (ISIS) targets in the region. A Marine Corps statement said that aircraft from VMFA-232 began returning home to California just this week after a six-month deployment with the SP-MAGTF-CR in CENTCOM.

In a separate statement from the 100th Air Refueling Wing, Air Force spokeswoman Senior Airman Victoria Taylor said that “the aircraft was transiting from Bahrain to Miramar in a flight of six aircraft when it crashed approximately six miles northwest of the [Lakenheath] airfield. The remaining five F/A-18C’s safely diverted to RAF Lossiemouth. The United Kingdom Coast Guard is currently on the scene of the crash site and is in close coordination with U.S. military officials.”

Last year, an U.S. Air Force F-15D Eagle crashed shortly after takeoff from RAF Lakenheath in farmland north of the base.

The following is the complete statement from 100th Air Refueling Wing:

The Marine Corps officially confirmed the death of the pilot, but it is unknown at this time if the pilot ejected from the single-seat aircraft.

The aircraft was transiting from Bahrain to Miramar in a flight of six aircraft when it crashed approximately six miles northwest of the airfield. The remaining five F/A-18C’s safely diverted to RAF Lossiemouth. The United Kingdom Coast Guard is currently on the scene of the crash site and is in close coordination with U.S. military officials.

Our deepest condolences go out to the family and friends of the pilot. The cause of the crash is still unknown.

More information will be released from the 3rd Marine Aircraft Wing Public Affairs office as it becomes available.