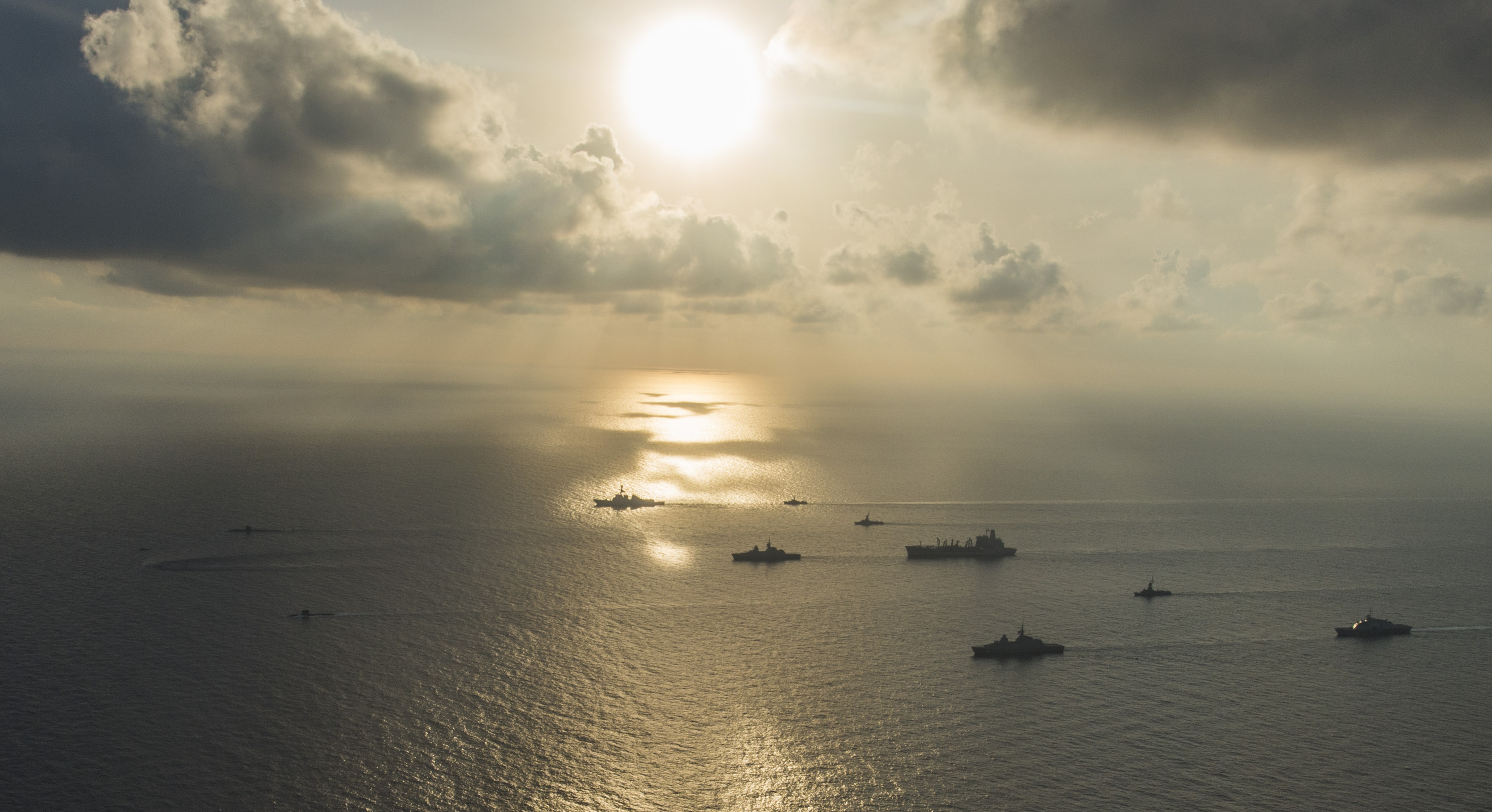 Ships and submarines from the Republic of Singapore navy and U.S. Navy gather in formation during the underway phase of Cooperation Afloat Readiness and Training (CARAT) Singapore 2015 on July 21, 2015. US Navy Photo

Amidst U.S. and Australian concerns of Chinese military expansion in the South China Sea, officials with China’s foreign ministry are claiming military facilities on a series of artificial islands are “for defense purposes only” in reaction to “high-profile display[s] of military strength and frequent and large-scale military drills by certain countries and their allies in the South China Sea,” according to a Wednesday press briefing.
Referring to the U.S. and its several multi-national maritime security exercises in the region, Ministry of Foreign Affairs spokeswoman Hua Chunying statement came a day after a joint U.S. and Australian statement issued on Tuesday in which Secretary of Defense Ash Carter and Australian Minister of Defense Marise Payne urged caution on militarizing the South China Sea region.

“[Carter and Payne] called on all claimant states to halt land reclamation, construction and militarization. They urged claimants to exercise restraint, take steps to ease tensions and refrain from provocative actions that could escalate tensions,” read the joint statement following the Carter and Payne meeting in Boston.

“They noted the recent statement by China’s President that China does not intend to pursue militarization of features in the Spratly Islands, and underscored the importance that China follow through on its commitment and take other similar steps to defuse tensions associated with its land reclamation program.”

China’s reclaimed islands have been focus of the latest round of tensions in negotiating the overlapping territorial disputes in the South China Sea. While the deliberation process between the claimants muddles through diplomatic and legal channels China has undertaken an aggressive land reclamation effort and constructed a series of facilities that could easily be used for military operations — most notably a facility on Fiery Cross Reef with a 10,000 foot runway within strike fighter range of Vietnam, Malaysia and the Philippines.

While China’s installations on the artificial islands do not appear to host advanced arms, they could easily be accommodated, U.S. officials have told Congress.

“If you look at all of these facilities — and you could imagine a network of missiles sites, runways for their fifth generation fighters and surveillance sites and all that — it creates a mechanism in which China would have de facto control over the South China Sea in any scenario short of war,” U.S. Pacific Command commander Adm. Harry Harris said before the Senate Armed Services Committee (SASC) last month.

The U.S. does not recognize the artificial a islands as sovereign Chinese territory but the U.S. Navy has not conducted a freedom of navigation mission within 12 nautical miles of the features — the international maritime boundary — since 2013.

In response to questions from reporters, Carter said Tuesday, “the United States will fly, sail and operate wherever international law allows, as we do around the world, and the South China Sea will not be an exception… We will do that in the time and places of our choosing.”

The U.S. conducting a freedom of navigation mission within 12 nautical miles has been a move the U.S. has been considering for months but has yet to execute.

Calls for the mission have grown louder following a Chinese People’s Liberation Army Navy surface action group voyage to the Bering Sea off Alaska in which the PLAN ships crossed into U.S. territorial waters without explicit permission in a legal transit known as an “innocent passage.”

Several times in the last month, reports stated the Navy had prepared to undertake the mission but those reports were walked back by the White House or the Pentagon.

Ultimately, the decision to execute the freedom of navigation mission within the 12 nautical miles of the features is up to the president.

As for China, the foreign ministry’s Hua said the purpose of the features were benign — despite the potential for military uses .

“Construction conducted by the Chinese side on relevant islands and reefs in the South China Sea is mainly to meet civilian needs, better fulfill China’s international responsibility and obligation and provide more public goods and services to the region and the international community,” she said.

The following are the partial statement from the Chinese Ministry of Foreign Affairs Oct. 14, 2015 press conference on the artificial islands in the South China Sea.

Q: The US and Australia expressed concerns at their ministerial consultations on October 13 about China’s island construction in the South China Sea, hoping that China would not “militarize” relevant islands and reefs. How do you respond to that? The two countries also expressed their readiness to enhance naval cooperation. What is your comment on that?
A: I have noted the Australia-United States Ministerial (AUSMIN) consultations. I would like to reiterate that China has indisputable sovereignty over the Nansha Islands and their adjacent waters. Construction carried out by the Chinese side on relevant islands and reefs of the Nansha Islands is mainly to satisfy civilian needs, better fulfill China’s international responsibility and obligation, and provide more public goods and services to the region and the international community. There certainly are a limited amount of necessary military facilities for defense purposes only. They fit well with the security environment around relevant Chinese islands and reefs. There is no such thing of China “militarizing” relevant islands and reefs.

It should be pointed out that certain countries have been flexing military muscles in the South China Sea over recent period of times. That is the biggest cause of “militarization” in the South China Sea. The Chinese side is severely concerned about that. We hope that relevant countries could stop playing up the issue of South China Sea, make good on their commitment of not taking sides on issues concerning territorial sovereignty, be discreet with words and deeds, respect efforts by China and relevant regional countries in safeguarding peace and stability in the South China Sea, and play a constructive role to that end.