So what happens when you reduce that capacity?

Of our maritime forces, the U.S. Coast Guard has faced the largest budget cuts in recent years. Just in the past five years the Coast Guard has been forced to reduce its operating budget by 25 percent. The high endurance cutter fleet, which provides surveillance and security for our 200-nautical-mile Economic Exclusion Zone (EEZ), is being cut from twelve ships to eight. One Coast Guard admiral compared the challenges they face with a “police cruiser in Cleveland responding to a call in Atlanta.”

With the proper resources however, the Coast Guard has been successful in stemming the flow of drugs to our cities and streets. In June of this year, the Legend-class cutter USCGC Stratton (WMSL-752) apprehended a semi-submersible carrying 5,500 lbs. of cocaine; a month later it stopped another semi-submersible, that one carrying 16,000 lbs. of cocaine. The semi-submersible seized in July was more than 200 miles off the coast of Mexico, resulting in the most lucrative drug seizure involving this type of transport in the Coast Guard’s history.

According to the Coast Guard’s 2014 Western Hemisphere Strategy, “The United Nations Office on Drugs and Crime (UNODC) and the World Bank have identified drug trafficking by illicit networks as the primary driving factor of violent crime. The U.S. territory of Puerto Rico is susceptible to this regional trend, where homicide rates hit a record high of 26.5 per 100,000 in 2012.” I believe the commandant is right; the math is easy—less capacity equals fewer interdictions and more violence in the heartland. 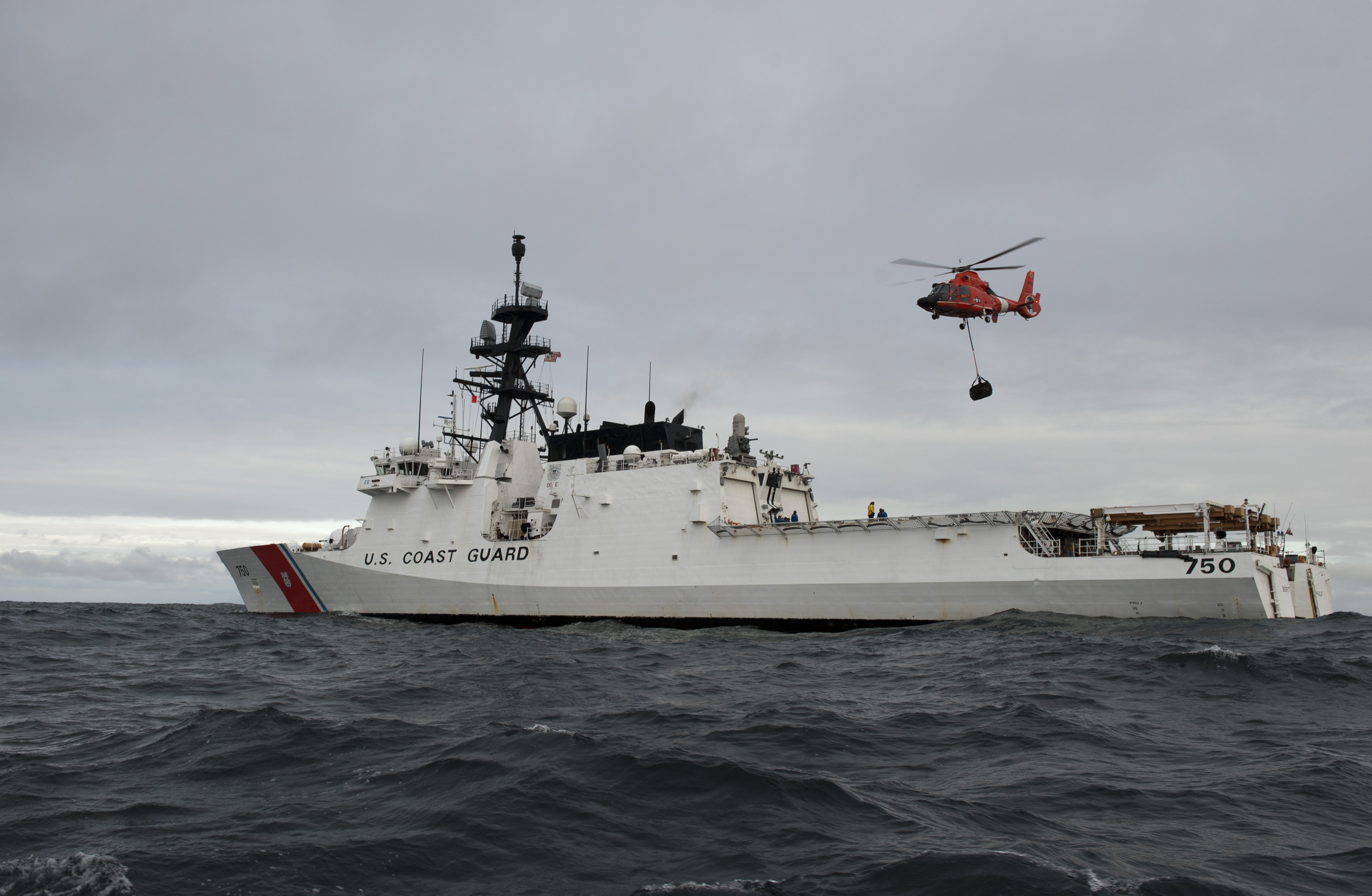 A U.S. Coast Guard tie down team prepares to attach a hoist cable to an MH-65 Dolphin helicopter during a vertical replenishment drill aboard the national security cutter USCGC Bertholf (WMSL-750) in the Arctic Ocean on Sept. 14, 2012. US Coast Guard Photo

But the drug war is not the only business occupying the Coast Guard fleet. With the opening of the Arctic for trade and commerce, the Coast Guard is now sending limited resources to support and protect our national interests in that region. “The growth of human activity in the Arctic region will require highly engaged stewardship to maintain the open seas necessary for global commerce and scientific research, allow for search and rescue activities, and provide for regional peace and stability,” a recent White House statement said. The Coast Guard currently dedicates a national security cutter to the Arctic region during the ice-free summer months, effectively removing it from serving elsewhere, in missions for which it was designed.

The emergent mission in the Arctic region was not envisioned for the NSCs and was not included in the several fleet-size analyses performed to determine sufficient numbers in the class. Stretching the fleet even further, the U.S. Navy has now decommissioned all of its Oliver Hazard Perry-class frigates, which have been workhorse platforms in the Caribbean and Eastern Pacific for the last decade of their service. Those frigates, empowered by their embarked U.S.C.G. Law Enforcement Detachments have been critical in the stemming of the flow of illegal drugs to the United States. And now they are gone, without U.S. Navy backfill. That diminished resource now demands even more CG asset presence in that counterdrug theater, but there are only so many to go around. To make up for the missing assets, the Coast Guard is forced to reduce operations in other mission areas.

Diverting to support the emerging Arctic missions, robbing Peter to pay Paul in the counterdrug arena (just to maintain a 20 percent interception rate) and replacing the outgoing high endurance cutters with a smaller fleet is not what we should be providing to and expecting from our Coast Guard. If the fleet size continues to be depleted through attrition, is stretched too thin to be effective or is built in insufficient numbers to properly meet its mission requirements, our ability to protect this country’s safety will be at risk. Can we afford to build more high endurance cutters? Can we afford not to? You do the math.