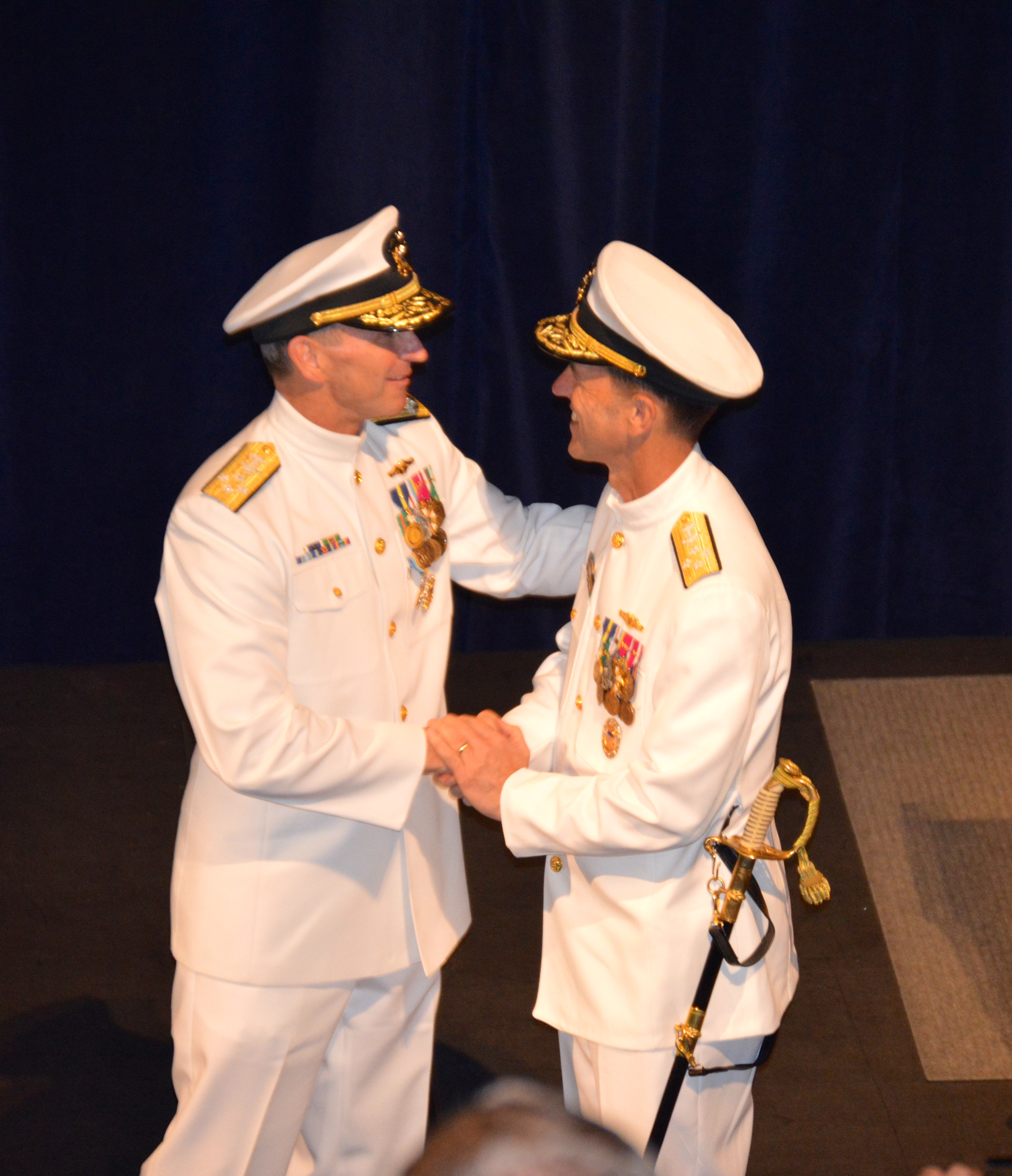 Adm. John Richardson took the helm of the U.S. Navy from former chief of naval operations Adm. Jonathan Greenert in a change of command and retirement ceremony at the U.S. Naval Academy Friday.

Surrounded by family, foreign heads of navies, current and retired admirals and dozens of members of the Naval Academy’s classes of 1975 and 1982, the two four-stars reflected on the Navy of today and tomorrow.

“When I started the watch in 2011, I said, hey, there’s storm clouds out there on the horizon and the clouds are forming,” Greenert said during the ceremony.
“But you know, ladies and gentlemen, there’s no place better to be than on the bridge if you’re going into a storm. You can see things coming, it’s kind of frightening, but you don’t want to be down below where you get seasick.”

“Challenges remain,” he told Richardson.
“It’s an evolving security landscape. Fiscal uncertainty is out there. The Navy needs a strong leadership team, and that’s exactly what we’re going to get.”

Richardson, who served as the head of the Naval Nuclear Propulsion Program, or Naval Reactors, for two years before being tapped to serve as CNO, spoke of a sense of urgency in the fleet to meet those challenges. 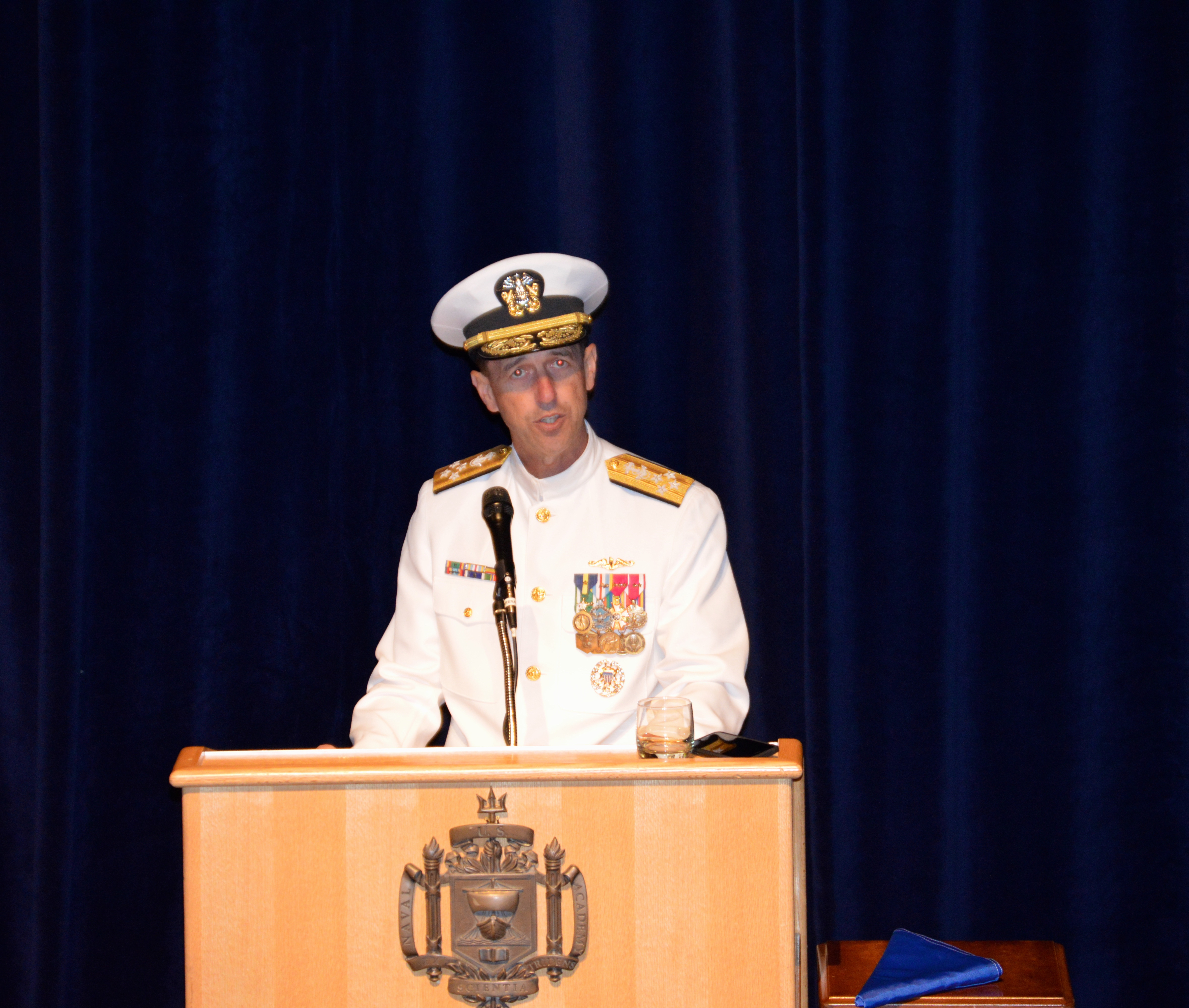 “I think that deep in our gut we sense a shift in the world, and we sense that once again it will be vitally important to protect our interests on the seas,” he said. He spoke of shifts in growing economic centers of gravity and said that, ”as it has been forever, when nations become strong enough to have global ambitions, it’s only a matter of time before they turn to the sea to enhance their prosperity and their security. And so today perhaps for only the second time in the last 70 years, things are getting sporty for us and other nations who have global ambitions. Things are getting sporty on the sea as they go to sea to achieve their aims.”

Both Defense Secretary Ash Carter and Navy Secretary Ray Mabus said at the ceremony that Richardson is the right man to lead the Navy through those challenges.

“He’s a bold and innovative thinker, a tremendous leader and a go-to officer for many of the Navy’s tough issues in recent years,” Carter said.
“He’s been its best troubleshooter, from handling problems of integrity and ethics, to preparing for the Ohio-class replacement ballistic missile submarine, to leading the Navy’s advanced capability efforts. We need to get all of that right in the years ahead, and I know he’ll be the one to do it.”

Mabus echoed those thoughts, saying that even when Richardson led Naval Reactors under the Department of Energy, “I gave him some of the hardest jobs in the Navy, all as collateral duties, including leading the investigation into the attack at the Washington Navy Yard two years ago. No matter how hard the task, he was always up to it with the calm professionalism which seems to be there in all our submariners but particularly in John Richardson.”

Mabus joked that “he was and he remains ahead of his time in technology. He was in his second class year and he was studying for a double-E exam when he and his roommates decided they were already pretty accomplished engineers and had the idea to wire their alarm clock to their coffeemaker with the goal of waking up to the smell of fresh coffee instead of the buzz of an alarm clock. What they woke up to was the fire alarm and the smell of smoke as this home-made device caught fire at the desired time.” 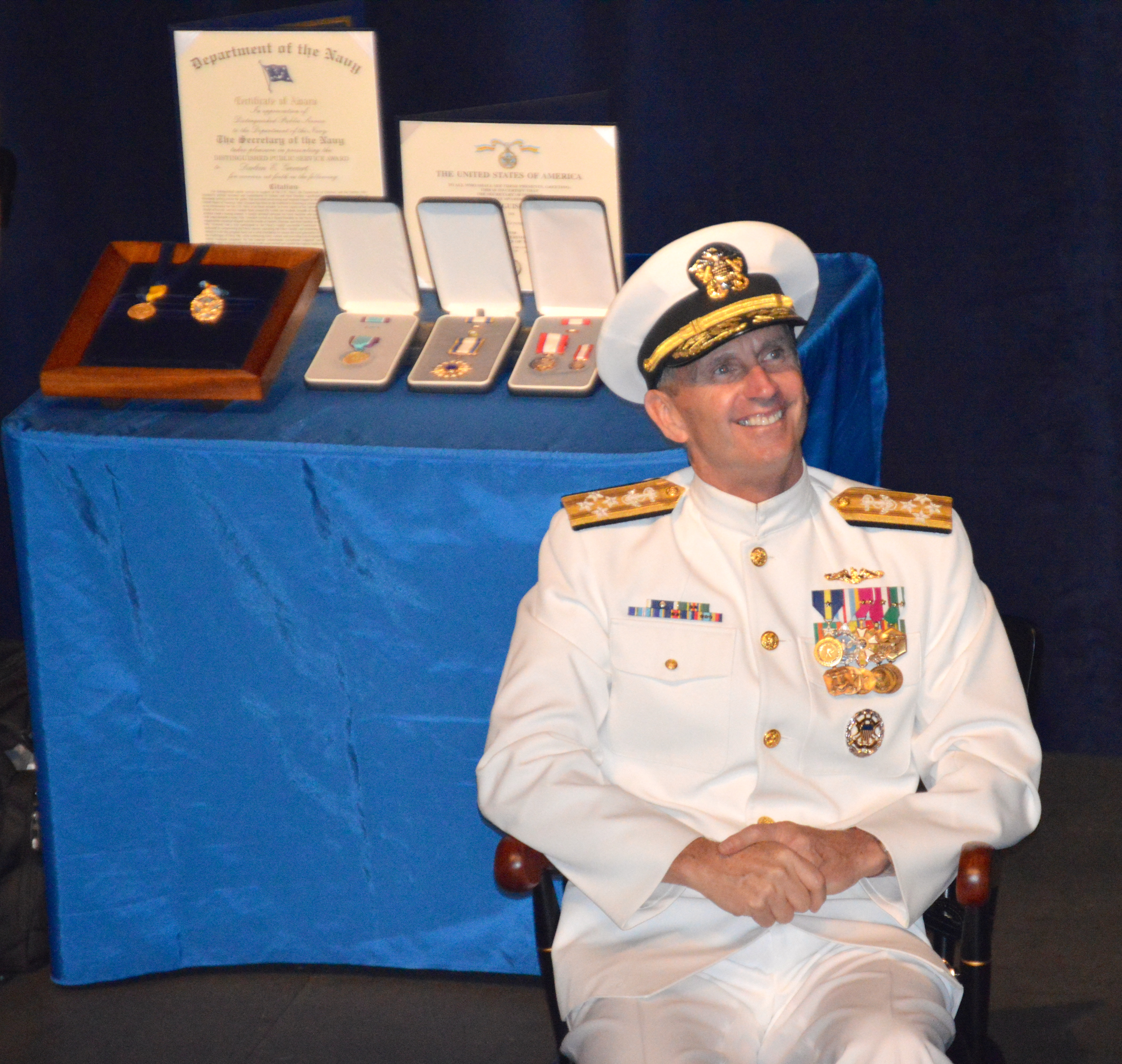 Adm. Jonathan Greenert listens as Navy Secretary Ray Mabus jokes about his time as a midshipman during the chief of naval operations change of command ceremony Sept. 18 at the U.S. Naval Academy. USNI News photo.

On a more serious note, Mabus said that “he’s understood where the future of technology lies; spearheaded new concepts in undersea, electromagnetic maneuver, cyber warfare; expanded the use of unmanned systems across all domains. He deployed laser technology for the first time, pushed the electromagnetic railgun for at-sea testing, and we saw the future personally together with the first carrier landing and aerial refueling of an unmanned aircraft.”

And, he added, “on a very personal note, Jon Greenert has been an absolutely wonderful partner to have in running the Navy. Having a leader like him – whose enthusiasm for embracing innovation, for knocking down bureaucratic barriers to progress, having flexibility of thought, respecting tradition but not being bound by it, combating constrained resources with thinking and acting differently, recognizing the strength of diversity – that’s made us all better.”

Carter described how Greenert oversaw the Navy during a time of “rebalancing to the Asia-Pacific, where much of America’s future will be written; reinforcing our long-standing NATO allies; supporting our forces ashore in the turbulent Middle East; and providing humanitarian assistance and disaster relief the world over, in a way that only America can and does do.”

On the topic of innovation, Carter said that “four years ago, [Greenert] was among a small group in the Pentagon who began to realize the advanced capability gap that could begin to develop between the United States and our high-end potential opponents. Jon was one of the first people in the Pentagon to start working on that problem.”

Greenert not only began working on new technologies like the electromagnetic railgun and unmanned vehicles, but “the Navy has also been developing innovative operational concepts that use existing capabilities in new and creative ways, like using flocks of swarming drones for several different missions, adapting our Tomahawk missiles to be used against moving targets in a maritime environment, and using smart projectiles that can be fired from a destroyer’s 5-inch gun to defeat incoming missiles at a much lower cost per round.”

“Continuing and building on all this work will be critical going forward, and Adm. John Richardson was a clear choice to carry it out,” Carter said