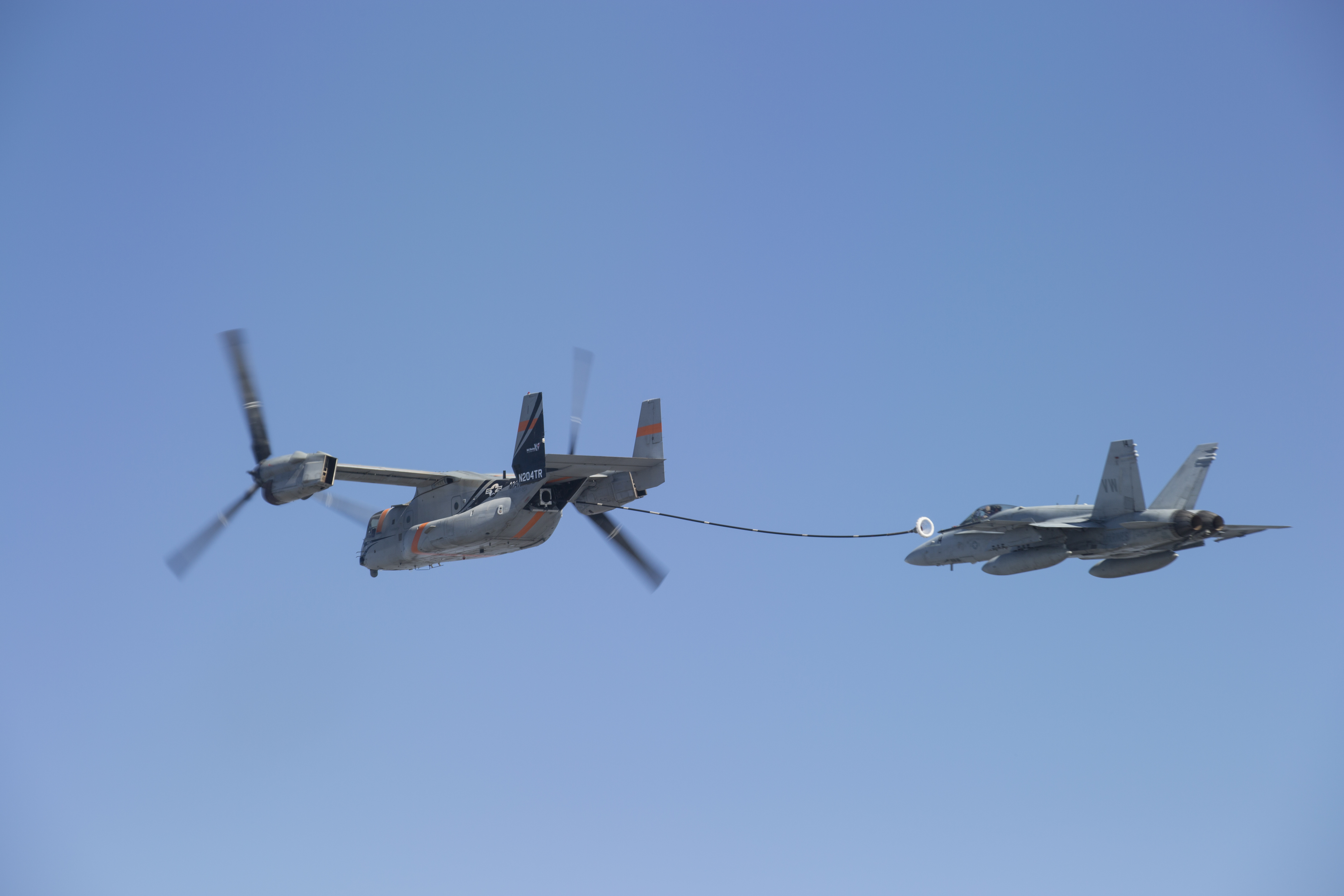 The Bell Boeing V-22 Program successfully completed an initial test of the V-22 Osprey performing as an aerial refueling tanker. In the August demonstration over north Texas, a V-22 equipped with a prototype aerial refueling system safely deployed, held stable, and retracted the refueling drogue as an F/A-18 Hornet flew just behind and to the side of the aircraft. Bell Boeing photo.

The F-35B, which is awaiting an initial operational capability (IOC) declaration by commandant Gen. Joseph Dunford any day now, has great capability built into it – but the MV-22 will give it even greater range, Deputy Commandant for Aviation Lt. Gen. Jon Davis told USNI News in a July 8 interview.

VARS is a roll-on/roll-off capability that allows the MV-22 to refuel other aircraft in flight. It can carry up to 10,000 pounds of gas and, if brought along on an Amphibious Ready Group (ARG)/Marine Expeditionary Unit (MEU) deployment, would allow the MV-22 to operate as a tanker for the F-35B when needed and shed the equipment easily when taking on transport missions.

Davis said the Marines are developing a program of record for the Bell Boeing-built VARS and are hoping to get it funded in the Fiscal Year 2017 budget after failing to secure funding in the 2016 budget request to Congress.

“I screwed up the way I sold it, I’ll take the blame for that. We tried to sell it as an F-35 capability. But it’s like, hey, you’re not going to sea in the F-35 … [Fiscal Year 2018] is your first shipboard deployment, so you don’t need it right away,” Davis said of the budget request negotiation process.

“But you can do it for AV-8s, for V-22s, for everything,” he continued. “We couldn’t get it into this funding cycle, but we’ll get it in the next one. It makes such great sense, there’s a lot of support for it. Right now we don’t have enough tankers out there, so this is again multi-missionizing something that we have. And I think the other nations that are going to power project from the seabase have the same problem. So it could be other nations are going to look at this like, hey, we need to get an airplane like this.”

The first F-35B squadron, Marine Fighter Attack Squadron (VMFA) 121, will move to Marine Corps Air Station Iwakuni in Japan in a permanent change of station in January 2017, Davis said. According to the 2015 Marine Aviation Plan, VARS was “being developed to align the fielding of the system with the F-35B WESTPAC deployment in summer 2017,” the first time the squadron would go to sea after the change of station. It is unclear how that schedule will be affected by the one-year delay in funding for a program of record.

The aviation plan notes that VARS will first be fielded for use by tactical aviation platforms, followed by other MV-22s and helicopters. The MV-22 is also expected to receive enhanced defensive weapons and upgrades to perform casualty evacuations.

The Bell-Boeing V-22 Program first announced successful testing of the refueling tanker capability in September 2013, saying that the V-22 extended, held steady and retracted its refueling drogue as two Hornets flew behind it. Internal company testing continued, and now four MV-22s have relocated to Marine Operational Test and Evaluation Squadron 22 (VMX-22) in Yuma, Ariz., for the sole purpose of experimentation. These aircraft will continue testing VARS, as well as airborne command and control packages and weapons systems, as they move towards production and fielding.