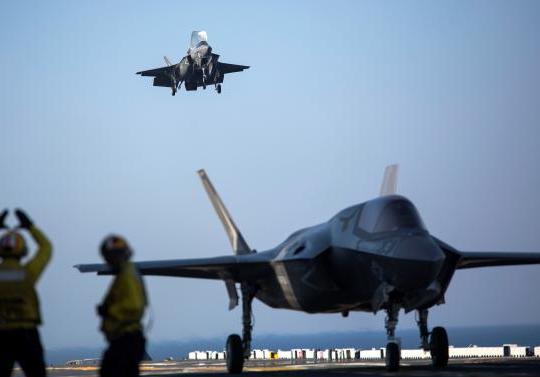 PENTAGON – When the time comes for the Marines’ first F-35B Joint Strike Fighters (JSFs) to deploy on an amphibious assault ship, the six aircraft on the float will bring more strike, sensing and communications capabilities than the three platforms they replace, the deputy commandant for aviation said.

But Lt. Gen. Jon Davis envisions future operations where a ship deploys with three times as many F-35Bs, where the aircraft have longer-range weapons and dominate in electronic warfare.

Davis told USNI News on July 8 that Marine Fighter Attack Squadron (VMFA) 121 will move to Japan in January 2017, in a permanent change of station from Yuma, Ariz., to Marine Corps Air Station Iwakuni. The squadron, which will have 16 jets prior to the move, will only bring 10 to Japan and only put six on a big-deck amphib when it goes on its first float.

“But we can also see already, hey, maybe we want to put more than that on there,” Davis said.
“This is a fifth-generation capability; can we get more capability by putting 10 on?”

“Could we go out with 16 and four tiltrotors?” he said, noting that the Marines would soon be adding a roll-on/roll-off package onto the MV-22 Osprey tiltrotor aircraft so they could act as a tanker.

“So I could actually now take 16 F-35s on that ship, more on an America-class ship, plus some V-22 tankers, and I have a fifth-generation strike capability in numbers if we needed to do that,” he said.
“We haven’t assessed that – we’ve looked at six, and we’d probably want to look at it again, how would we do with more. And I think we leave that up to our Marine Corps leadership and Navy leadership and national leadership to say, how do we maximize the capability of this particular machine and this particular capability for the nation.” 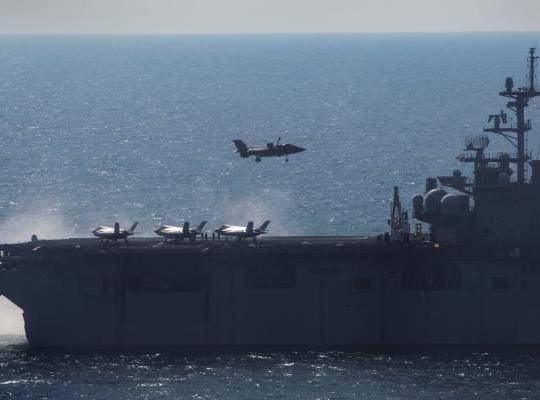 Putting that many fighters on an amphib has precedent, though. During Operation Iraqi Freedom, the Marines had four or five big-decks sitting off the coast with 60 to 65 Harriers operating from the seabase, Davis said. The Marine Expeditionary Units sailed to the Middle East with their usual aviation combat element, but the helicopters left the big-deck to operate from the smaller ships and from ground bases, and additional Harriers were brought in for operations.

Doing so wouldn’t be easy, Davis said, with the higher number of aircraft stressing the spare parts inventory and creating challenges in ordnance, refueling and flight deck operations management. The Navy and Marine Corps are still learning how to manage the flow of information between the new jets and the ship, which would be more complex with additional aircraft, but he said the area is “ripe for experimentation and ripe for us to learn and do.”

Davis stressed that his current priority is reaching initial operational capability – potentially by the end of this month – and building up the next few F-35B squadrons, but he said the possibilities for future operations are exciting.

Those future operations also include significantly greater capabilities than the aircraft currently has with its software block 2B.

Davis said that everything the Marines put in the sky ought to be a shooter, a sensor and a sharer, and that philosophy has guided the Marines’ thinking in what will be included in future software configurations as well as outside development efforts the service may pursue.

“The airplane can do a lot, but what can the weapons we put in the airplane, what can they do? It’s an airplane that sees an incredibly long way. … You want to kill what you can see, so we want to be able to kill at longer rangers if we can. So we’re working on that,” Davis said.
“We’ve been doing a lot to multimissionize everything we own, whether it’s our H-1s, putting Link 16 in there, our Harriers, our F-18s, our V-22s, our C-130s – we have a thing called Harvest Hawk (to facilitate firing guided munitions). Every platform is a sensor, sharer, shooter. So if you think about that, what are the other things that we’d want this to do? How do you make an airplane that’s already a multimission airplane even more of a multimission airplane? So it’s, I think, a natural progression for the things they’d want to really extract the maximum utility out of everything on that airplane.”

“The big thing that we’re working on inside the United States Marine Corps is, if this airplane sees and knows so much – it’s really, really smart – how do I get the information that the lance corporal at the pointy end of the spear needs to that Marine, he or she, where they need it, when they need it?” he continued.
“Can they pull that data down? If it’s a big server in the sky, or if it’s a big cloud, how do I pull information from that cloud in the bandwidth that I need to do my job better?”

The F-35B can currently share information with Marines on the ground, “but it’s not in the bandwidth that we want, not the fidelity we want.” Streaming video will not be available until software block 4.1, based on current plans.

U.S. Air Force Lt. Gen. Christopher C. Bogdan (right), the Program Executive Officer for the F-35 Lightning II Joint Program Office, and U.S. Marine Corps Lt. Gen. Jon Davis, Deputy Commandant Aviation, along with distinguished visitors from the U.S. Department of Defense and the United Kingdom Ministry of Defence, watch as an F-35B lands on the flight deck of USS Wasp (LHD-1) off the coast of Virginia on May 20, 2015. US Marine Corps Photo

The aircraft can already see through the weather better than its predecessors with its synthetic aperture radar (SAR), making close air support more effective in poor visibility scenarios. Software block 3F will bring additional weapons, and 4.1 or 4.2 will bring the small diameter bomb, which Davis said is also an effective all-weather weapon.

As more foreign partners bring the F-35 into their fleets, Davis said there’s a potential to bring in foreign weapons as well.

“We talk about common logistics for the airplane, but also too down the road I think you’re going to think about common weapons and things like that as well,” he said, noting that if an American F-35B needed to land on a British ship, it would be nice if the two countries had common weapons so they could reload the American aircraft.

Davis also mentioned electronic warfare as a “real growth area for this airplane,” though there are not immediate plans to add more capability to the platform.

“It’s a tremendous capability, it sees a lot, so that’s something we’d want to grow into and we’re advocating for,” he said.
“We’ve been advocating for that for about the last six years, but we’ll advocate even more strongly for it in the 2020 timeframe.”

For all the growth potential the F-35 has, both in the capability of an individual jet as well as the configuration of an aviation combat element, Davis said everyone needs to remember this is a long game. Much like today’s Super Hornet is vastly different from the first Hornet to hit the fleet, and today’s AV-8B Harrier hardly resembles the AV-8A from the 1980s, “the F-35 is, I think, a 50-year platform for the Department of the Navy and U.S., and it’s going to be a vastly different airplane as we develop that airplane and bring new capabilities into it. I really think it has tremendous capability for growth. I think we’ve got a winner, I’m really excited.”