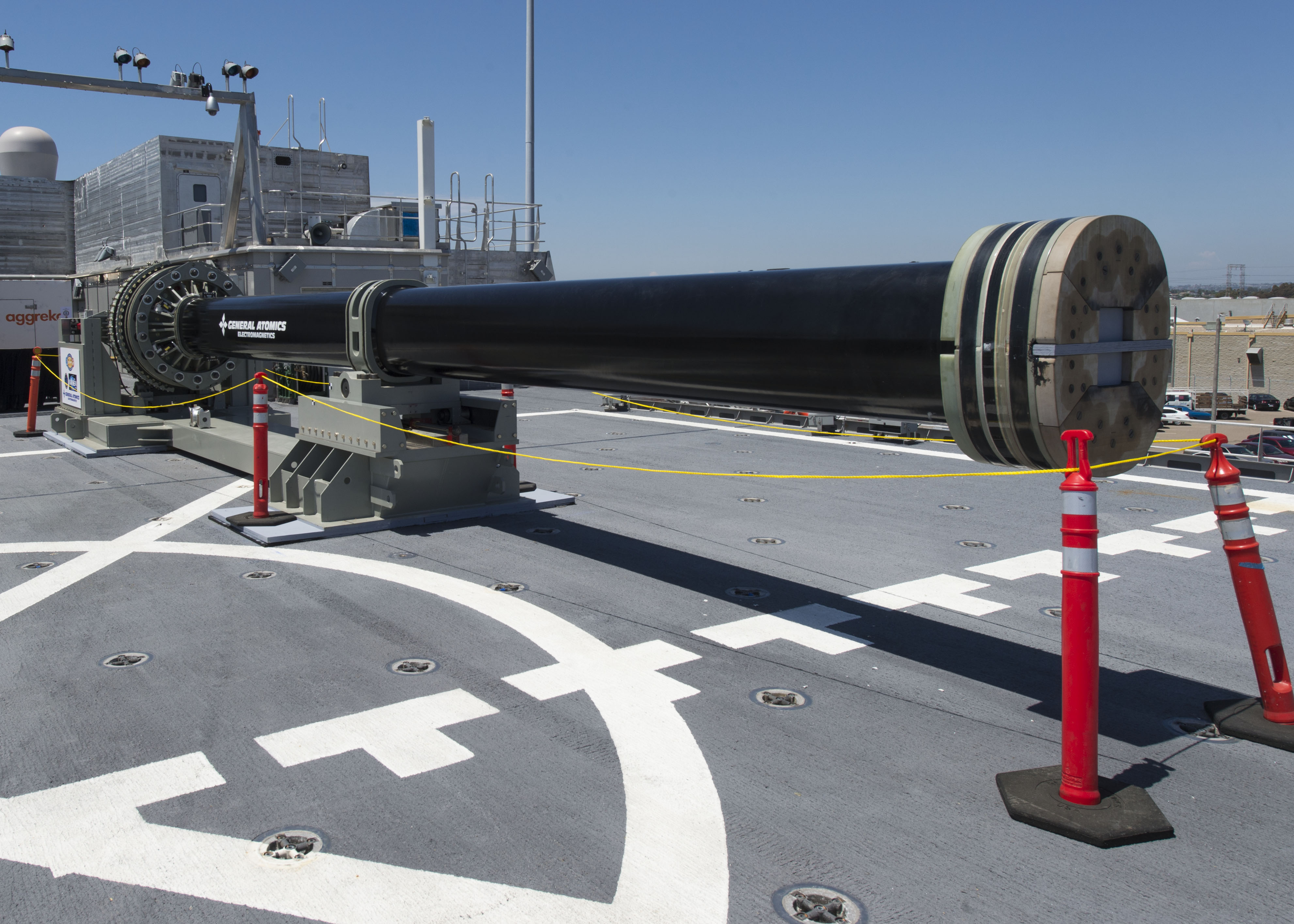 The Navy is pursuing a multi-pronged approach to fielding energy weapons by the end of the decade, with the hopes of upgrading its 30 kilowatt laser gun to 100 kw or more, and giving its electromagnetic railgun a higher repetition rate.

Rear Adm. Bryant Fuller, chief engineer at Naval Sea Systems Command (NAVSEA), said in a panel presentation at the Directed Energy Summit, hosted by the Center for Strategic and Budgetary Assessments and Booz Allen Hamilton, that both follow-on technologies should be in the hands of sailors in the fleet by 2020.

The Navy sent a 30 kw Laser Weapon System (LaWS) to U.S. 5th Fleet on the interim Afloat Forward Staging Base USS Ponce in September 2014, where it has proven it can augment ship self-defense as well as intelligence, surveillance and reconnaissance for better maritime domain awareness, Fuller said. LaWS was only supposed to stay out for a year, but despite the harsh environment in the Persian Gulf, it has performed well and fleet leadership agreed it will stay operational as long as Ponce remains at sea – until Fiscal Year 2017 or longer, he said.

“Sometime in the very near future” the Navy will award a development contract for the larger follow-on system, a laser gun of 100 to 150 kw. That weapon will go out to sea for a demonstration by FY 2018, he said, keeping in line with the goal of transitioning technology from the lab to the warfighter as quickly as possible for operational testing.

The other half of the Navy’s push to deliver energy weapons to the fleet is the electromagnetic railgun. A manual-load version will go to sea on a Joint High Speed Vessel next year, but the Navy is already working on a version that would allow for 10 shots per minute. This “rep rate” version, despite challenges including thermal management in the barrel, is expected to go to sea by FY 2019.

“Get it to sea, see how it operates in a marine environment and put it through its paces,” Fuller said.

During the conference, Navy Secretary Ray Mabus said the Navy had been working on directed energy since the 1980s but needed to find ways to move technology along faster to keep up with global threats.

Frank Kendall, under secretary of defense for acquisition, technology and logistics, told USNI News at the same conference that the Navy’s multi-prong approach is the best way to ensure rapid fielding.

Despite a new emphasis on speed to market in the Pentagon’s newest Better Buying Power guidance, “there’s no magic that’s going to allow us to go much much faster; but in some areas, we’re probably going to want to take more risk and maybe use multiple approaches to try to get to the same place and try to move the technology forward as quickly as we can,” he said. He added that a roadmap of directed energy weapon efforts has several technologies reaching the demonstration phase within the next five years, which he believes is the right pace.

Once the Navy reaches the higher-powered laser gun and the more operationally useful “rep rate” railgun, the service will have to figure out how to deploy them. Fuller said the Navy just wrapped up a feasibility study on the Zumwalt-class DDG-1000 destroyers, and leadership will be briefed on the results soon. Other studies, including one on the Arleigh Burke-class DDG-51 destroyers, are ongoing. The results will help the Navy identify where to put these weapons when they first go out to sea and what challenges they may face – with power conditioning and integration being a big concern for the Navy at this time, Fuller said.

The railgun may also make an appearance in Army ground units. Army Brig. Gen. Neil Thurgood, program executive officer for missiles and space, said at the same panel presentation that his service would like the railgun to address the short-range ballistic missile threat. The Navy is taking the lead on development but the Army is already working on doctrine and tactics, techniques and procedures for using such a weapon. It will help the Army conduct missile defense with more rounds shot off faster, that can hit incoming missiles farther out from their target, and at a lower cost per engagement, Thurgood said.

The Navy, in addition to developing the railgun itself, is working on a hypervelocity projectile (HVP) that will support both the railgun and conventional 5-inch guns. The GPS-guided round will fly at hypersonic speeds, but the Navy is still working with the Pentagon’s Strategic Capabilities Office to close the fire control loop between the gun and the projectile. The Army would benefit from this work even if it chooses to use a different gun design than the Navy’s ship-based weapon.