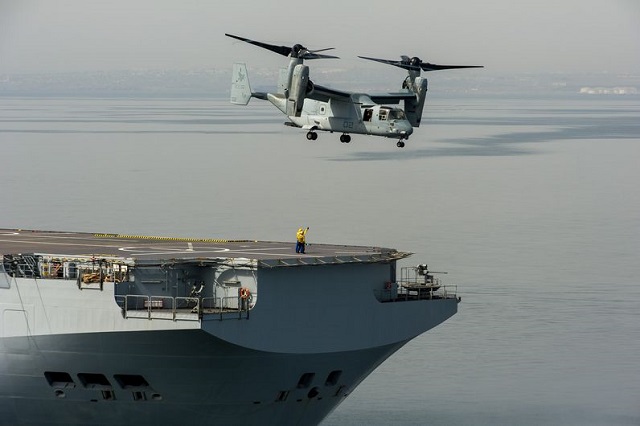 The French Navy is studying certifying the U.S. Marines’ MV-22 Osprey for operations on the French Mistral-class amphibious warship, after a successful July 5 test.

The French Navy’s Naval Aviation Practical Experimentation Center (Centre d’Expérimentations Pratiques de l’Aéronautique Navale) conducted testing off the coast of Djibouti in East Africa, where both France and the United States have a permanent military presence.

According to an announcement by the French Ministry of Defense (MOD), Marines from the 15th Marine Expeditionary Unit deployed aboard the USS Essex (LHD-2) flew to the Dixmude (L9015) for the interoperability certification event. Whereas the MV-22 had already landed on Dixmude in a test last year, according to Navy Recognition, this month’s event tested the overall ability to operate on the ship, not just land. 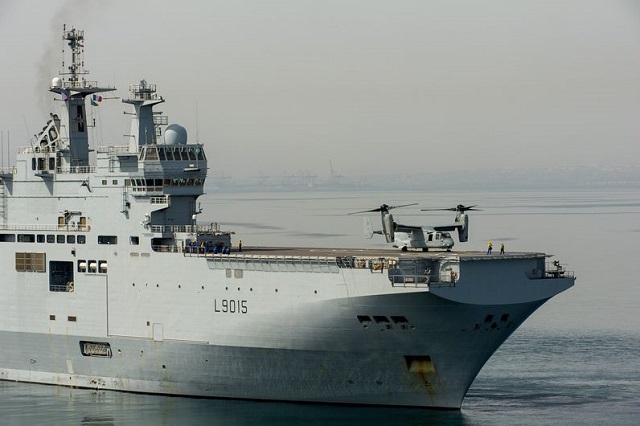 The French team watched the Ospreys embark and disembark personnel, refuel and park on the deck with the engines off, according to the MOD announcement. They measured the deck temperature throughout the event, as the heat generated by the Osprey is one of the limiting factors for where it can operate. With all planned maneuvers successfully completed, the French testers will review their data and make a decision on whether to certify the aircraft for future operations on the Mistral-class ships.

The Marines are working to achieve greater interoperability with their NATO counterparts. Among the efforts is the Allied Maritime Basing Initiative, in which an American Special Purpose Marine Air-Ground Task Force (MAGTF) Crisis Response unit, which includes an MV-22, will deploy aboard a European amphibious ship. France is among the countries expected to participate in this experiment. The foreign ships will not only have to handle the Osprey’s heat and extreme downwash, but will also need enough space to handle flight deck operations, refueling, maintenance and other shipboard needs.