The Marine Corps is experimenting with the interoperability of its Marine Air Ground Task Forces (MAGTFs) with various non-traditional platforms, including rarely-used 1980s logistics ships and foreign navies’ amphibious ships, to help get its land-based units back out to sea.

As the Navy and Marine Corps are working to grow the size of the amphibious ship fleet, the Commandant’s Planning Guidance from January includes a section requiring the Marines to “aggressively develop concepts of employment for alternative platforms that are consistent with mission requirements and platform capabilities. Our priority will be to develop immediately a concept of operations for SPMAGTFCR Africa (Special Purpose MAGTF – Crisis Response) and Marine Rotational Force-Darwin that employs alternative sea-based platforms to enhance flexibility and compensate for the shortfall of amphibious ships.”

Marine Corps Seabasing Integration Division director Jim Strock told USNI News on June 18 that he and others in the Marine Corps are taking that guidance seriously, plotting out ways to use the military’s newest platforms – as well as some older and forgotten ones, and those belonging to allies – to bring Marines where they are needed.

“What the commandant is seeking is not necessarily new, it is a repurposing because we now have a driver in this, and that is the Special Purpose MAGTF CR in Africa and the Marine Rotational Force in Darwin, to find additional methods to give them a greater degree of littoral mobility,” he said.
“The CR MAGTF in AFRICOM, they have V-22s. Aviation-wise, they can get anywhere they want, but that has its limits. But the ability to put them onboard surface ships for select periods of time – an amphib can carry a Marine unit virtually indefinitely; you can’t do that with these other platforms, they’re not designed [for that] – but for select, short periods of time, yeah, you could put … units and aircraft onboard. Your biggest limitation with aircraft would be the maintenance and support capabilities that the ship has for the V-22.” 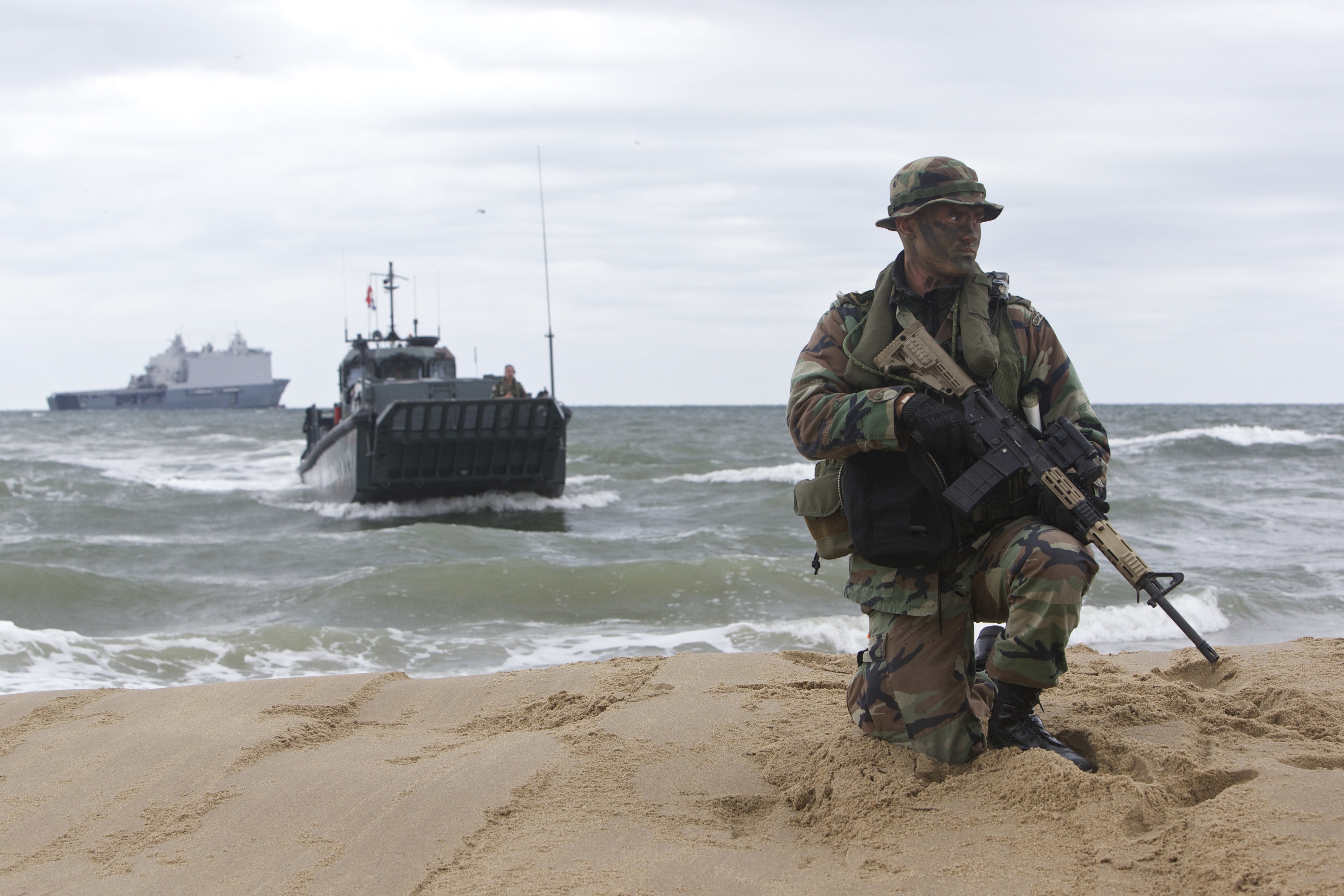 A Dutch marine from the Royal Netherlands Marine Corps is securing the area of Utah Beach during Bold Alligator 14. Dutch amphibious ship HNLMS Johan de Witt (L-801), in the background, served as the command and control headquarters during the exercise to improve interoperability between Dutch, American and other partners’ militaries. US Navy photo courtesy of the Royal Netherlands Air Force.

“Ideally, we would partner with our Navy brethren to provide a year-round, day and night crisis response force. However, with more requirements world-wide than available U.S. Navy amphibious ships, the Marine Corps has had to adopt a land-based deployment model from allied countries such as Spain, Italy, and Romania,” he said. Having these units land-based, however, means they are limited to operating in a hub-and-spoke model and deploying only as far as their MV-22 Osprey and KC-130J tanker combination will take them.

Operating from a ship not only offers a mobile home base, but “basing at sea offers allies and international partners a visible deterrent when a warship – be it American, British, Italian, Spanish, or French – with U.S. Marines embarked aboard is sitting off the coast. In any language, such a sight means it is best to not cause trouble here,” Ulsh added.

Marines will first head to sea on an Italian ship this fall, followed by a British amphib and eventually French, Spanish and Dutch ships, the Marine Corps Times reported.

Ulsh told USNI News that the Allied Maritime Basing Initiative is still in the proof-of-concept phase and that the Marines would have to go aboard allies’ ships to more fully understand how well the Marines could operate from them. Because the initiative is still in its early phase, it is unclear whether Marines on foreign ships would replace the land-based SPMAGTFs or supplement them, he said.

Strock uses similar matrices – one matches ships to other ships, another ships to surface connectors and the third ships to aircraft – to help guide his plans to insert interoperability experiments into pre-existing wargames and exercises.

Among the items to test in Strock’s matrix, and one of the ones getting a lot of widespread attention, is testing the new Afloat Forward Staging Base with the whole range of aircraft and connectors. The Navy just accepted the first AFSB, the USNS Lewis B. “Chesty” Puller (MLP-3/AFSB-1), on June 12, and a lot of people already want to use it.

“It is my understanding that that ship is now, I think, at initial operating capability and is planned to go to support combatant commander mine warfare requirements,” Strock said. However, “a lot of people, to include the commandant, said we’d like to get our hands on that thing and that type of capability – and he’s absolutely right. And we have been developing some ideas on how could we use a ship like that – that ship, or a ship like that – to support the CR MAGTF and Marine Rotational Force Darwin.”

Because the MV-22 creates a lot of heat and a tremendous downwash, Naval Air Systems Command (NAVAIR) needs to carefully study whether to certify the Osprey for operations on the various ship classes the Marines are considering as alternate platforms. Strock said the Marines are working with NAVAIR now to certify the MV-22 to operate on the AFSB, though none of the aircraft have landed on the Lewis B. Puller yet. 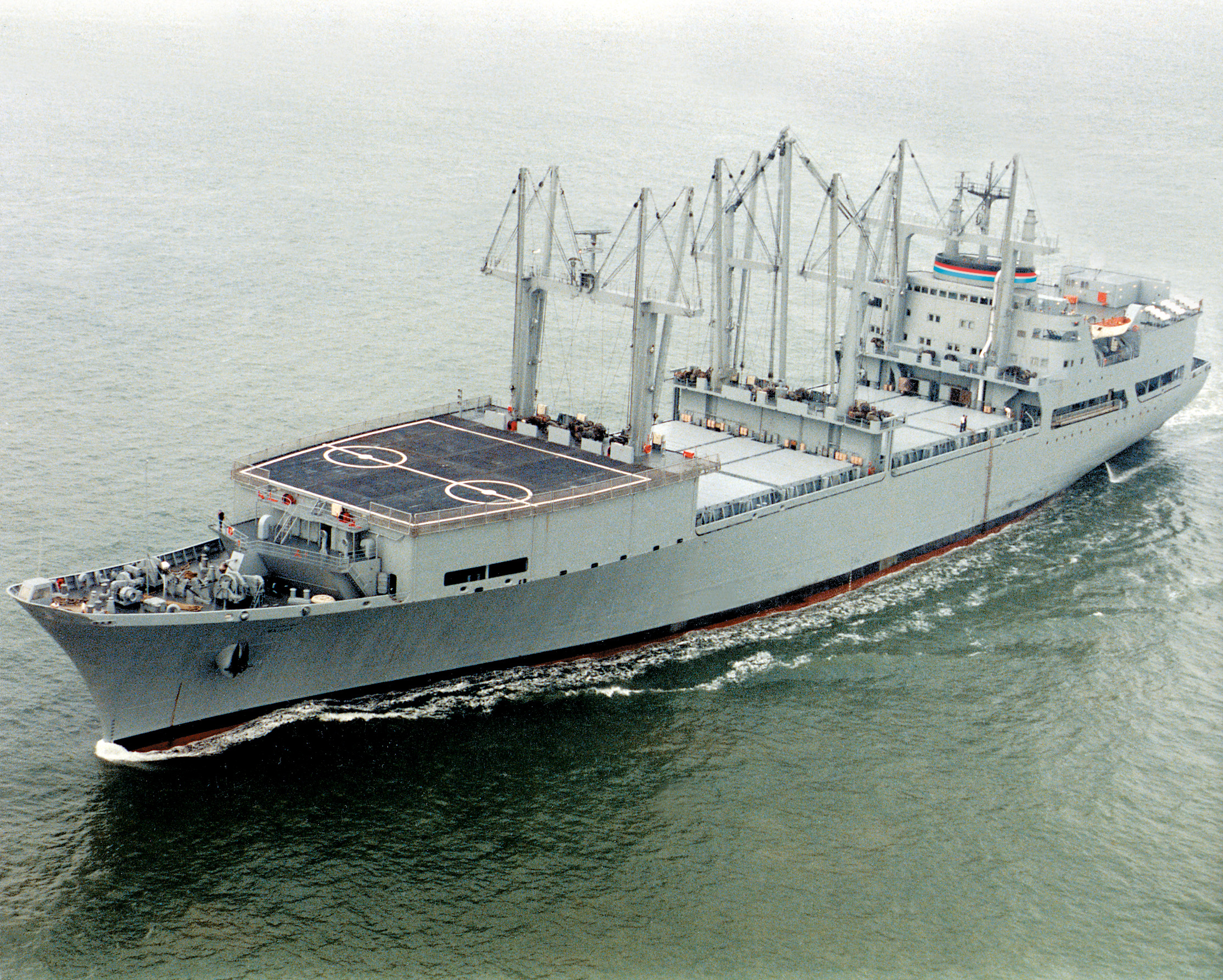 Though much attention has been paid to the newer MV-22 and AFSB, Strock said his office is also reaching further back into the Navy’s inventory to help address the amphibious shortfall. A few weeks ago, a crane on a T-AVB aviation logistics support ship – one of the original Maritime Prepositioning Force (MPF) ships from the 1980s – lifted onboard a LCM-8 “Mike boat” – which made its debut in the fleet in 1959.

There are only two T-AVBs in the fleet, one on the East Coast and one on the West Coast, and the Mike boats are so old the military has auctioned some off to the public. But Strock said they were in good enough material condition to deploy if they proved useful for bringing Marines to sea.

Similarly, Strock said there has been speculation about the Marines using the Maritime Administration’s vehicle cargo ships Cape May (T-AKR-5063) and Cape Mohican (T-AKR-5065) – delivered in 1972 and 1973, respectively – as connector station ships after testing several years ago proved they could work with current surface connectors.

“These are vessels are not amphibious ships as we know them, but quite frankly Marines, we’ve been operating off these ships in varying degrees for years,” he said.
“Everyone thinks, ‘well, we’re going to make these connector station ships,’ which we’re thinking about doing, ‘because we know we can put LCACs on them because we tested that back in 2008. This is a new and bright idea.’”

“In 1994, Col. Strock moved his battalion from Okinawa to Korea … onboard the Cape Mohican,” he said, referring to his earlier career as a Marine officer.
“A lot of these are just old ideas that are fresh and new. A lot of it’s back to the future. But we’re aggressively pursuing that because that’s what it says to do here,” he said, referring to the Commandant’s Planning Guidance.

Strock said that, given the resources to insert experiments into exercises and to obtain NAVAIR and other certifications, the sky is the limit in terms of creating combinations of ships, connectors and aircraft that are technically interoperable. What will be interesting to watch in the coming years, he said, will be the larger packages of those platforms that deploy to bring Marines around the littorals and across combatant commands.

“What we’re really going to have to look at in the future is, we have a variety of platforms out there that are all designed for primary missions, be it MPF or be it a primary mission of 30 years ago with the T-AVB. I think the challenge will be in how do we assemble the right mix of these types of platforms to generate the ability to support a MAGTF at sea?” he said.
“And it’s no single platform that can do it. … What’s the right mix of non-amphibious ships to do that? I don’t know. Do you need three JHSVs plus an MLP plus a tug boat? What’s the right mix? And I think over time we’re going to have to sort that out. … The ARG/MEUs sail out with a pre-defined mix: a big-deck, an LPD and an LSD. That’s pretty routine. But if you are able to get three or four platforms together to support a 90-day patrol for the rotational force out of Darwin, if you did that a year from now with three or four ships, the time they did it after that I doubt if it’s going to be the same three or four types of ships. What’s the right mix? I think that will be exciting over time to capture the lessons learned and be able to go back to the operating forces with some decent data.”