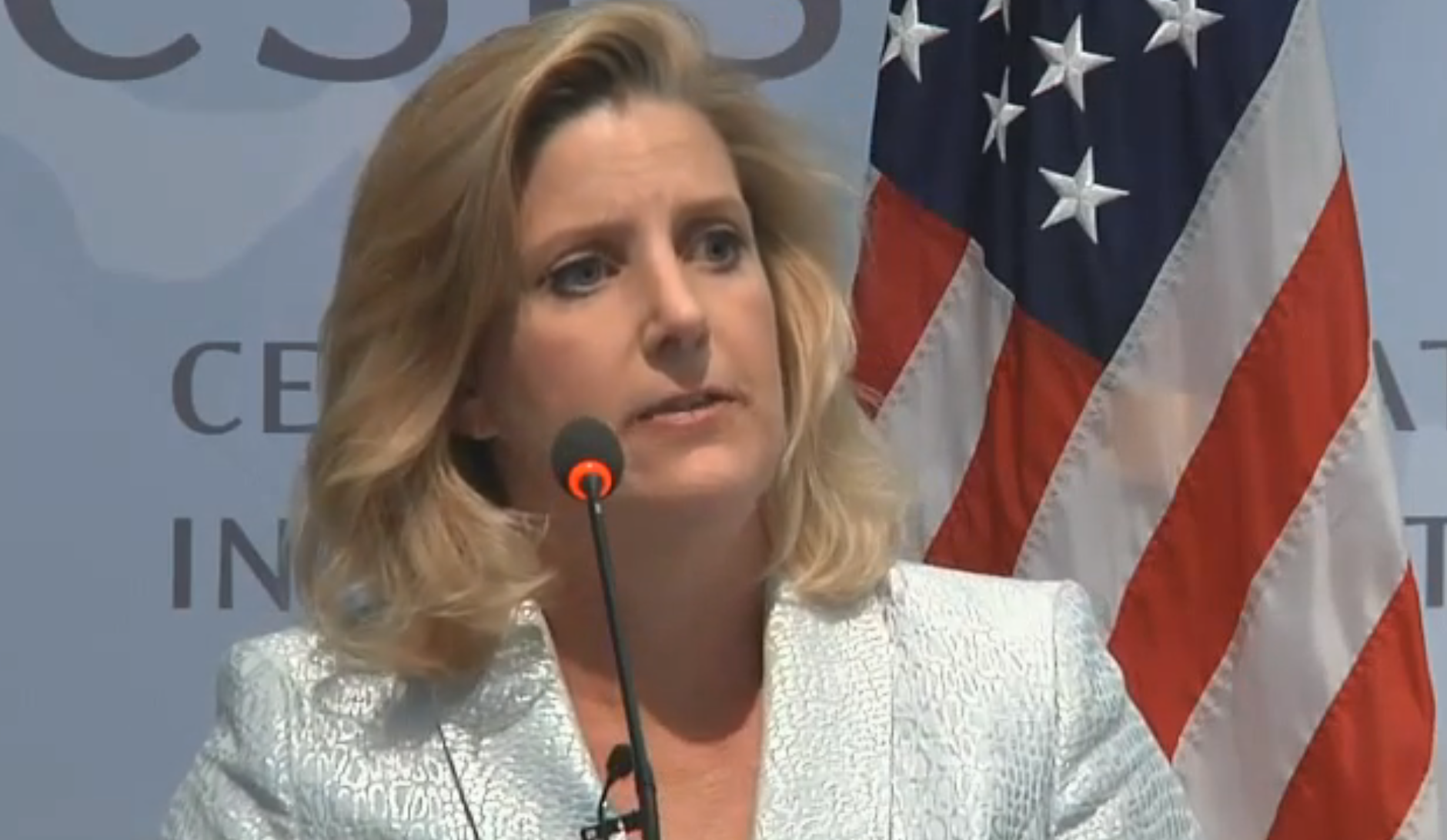 Under Secretary of Defense for Policy Christine Wormuth on July 13, 2015 at the Center for Strategic and International Studies. CSIS Screengrab

While the American public’s attention—when it focuses on Afghanistan—is centered on the withdrawal of U.S. forces and the uptick of terrorist attacks in Kabul and Khost, the Pentagon’s top policy chief says the Taliban are “definitely taking more hits than they did in 2014.”

Christine Wormuth, speaking Monday at the Center for Strategic and International Studies, a Washington, D.C., think-tank, added, “When [the Afghan security forces] go on the offensive, they have lower casualty rates” than when having to defend isolated outposts and or fight at checkpoints.

She conceded that the security forces’ casualties are 60 percent higher than they were a year ago, a reflection of their higher operating tempo and the Taliban attacks on remote positions.

“The Taliban is not lying down.” Other threats to the unity government of President Ashraf Ghani and Chief Executive Officer Abdullah Abdullah are coming from al Qaeda, the Haqqani Network, and an offshoot of the Islamic State, also called ISIL or ISIS.

The Afghan government “is trying to tackle a whole host of problems” that go beyond security, Wormuth said. As an example of the growing partnership between Washington and Kabul, she cited the United States and the Ghani government working together on a counterterrorism strategy for Afghanistan.

Afghanistan also has improved relations with neighboring Pakistan. In the past, Pakistan provided havens for the Taliban and Haqqani fighters. Pakistan itself has taken a much more aggressive approach in countering its own terrorism threats, most noticeably following a Pakistani Taliban attack on the Army Public School in Peshwar. More than 130 school children died in the December 2014 assault.

Relations between the United States and Pakistan, as well, “are much better than [they] were a few years ago.”

Wormuth said that the United States is committed to “a time-phased approach” to withdrawing all but 1,000 to 1,500 American forces from Afghanistan over the next 18 months. There are about 9,800 American service members in Afghanistan now.

During the drawdown, conditions on the ground and concerns of Ghani and Abudllah will be taken into account, but “eventually Afghanistan will have to stand on its own.”

She said the Afghans are making “good progress” on developing its special forces and special air wing. At the same time as the withdrawal moves forward, the Afghans and coalition forces are identifying “critical enabler gaps” such as intelligence and logistics that need to be addressed to help the Afghans defend themselves and counter the Taliban.

“We have a lot invested in Afghanistan.”

Wormuth said, “One lesson we have learned” from the American experience in Iraq that can be applied to Afghanistan and countering the Islamic State in Iraq and Syria is “trying to do it for a country doesn’t work.”

“The military piece [in countering the Islamic State] tends to get the most attention.” She identified two areas: denying ISIL havens in Iraq and Syria and building security capacity—with the forces of Prime Minister Haider al-Abadi in Baghdad and Syrians willing to fight the Islamic State and the regime of President Bashar al-Assad.

But she listed as the first line of effort, being led by the State Department as “trying to help the Iraqi government develop a multiple sectarian approach to governance.” This means brining more Sunnis into positions of authority in the Shi’ite dominated government and military.

While saying 5,000 air strikes against the Islamic State has hindered its freedom of movement damaged its ability to operate, “we need to have an accompanying ground force. We have to have local forces” to defeat it.

She said there “has been pretty good progress” in Iraq in improving existing forces to fight the Islamic State. The forces are sent through specialized training camps to improve their skills and professionalism. So far, about 3,000 Iraqis from different parts of the security forces have undergone the training and the United States is now “starting to see the flows come through” in greater numbers.

Wormuth added that the additional 450 American service members sent to Iraq will focus on training Sunni tribal fighters. She said 1,300 Sunnis are either in training or the pipeline. Al Qaeda and the Islamic State are Sunni extremist movements.

While only 60 volunteers have completed training in Syria to fight the Islamic State, Wormuth attributed the low number, in part, to the tough screening and vetting that goes into admitting individuals into the program. She added the program is only seven months old, and it took time to reach memoranda of understanding and agreement with a number of governments and build training facilities.

She said, “7,000 volunteers have come forward” now knowing that they are to fight the Islamic State and not Assad.

“This is the game in town,” and it will be a long struggle.

In looking at Russia and China as security challenges, following Marine Corps Gen. Joseph Dunford’s answer at his confirmation hearing to be chairman of the Joint Chiefs of Staff about the top security challenges, Wormuth said, “We have to walk and chew gum at the same time” in those “very important relationships” in the near and far term.

On immediate budget issues, she said while “we know how to do that,” working under a Continuing Resolution that among other things freezes new programs and restricts transferring of funds from one area to another, it ” would be pretty difficult” for the services to know how they will operate for the year and plan for the future.

As Defense officials have been saying since the Budget Control Act was passed, she called on Congress to “find a solution to sequestration”—across-the-board automatic budget cuts. Wormuth added, “We’ve got to, got to, got to” receive Capitol Hill’s approval to become more efficient through base realignments and closures and changes in the compensation package.

She noted that her policy shop of 300 workers has been under a hiring freeze for three years and that makes it more difficult to bring “new blood” into the Department. In the Senate version of the defense authorization bill, her office would take a 7.5 percent cut in personnel.