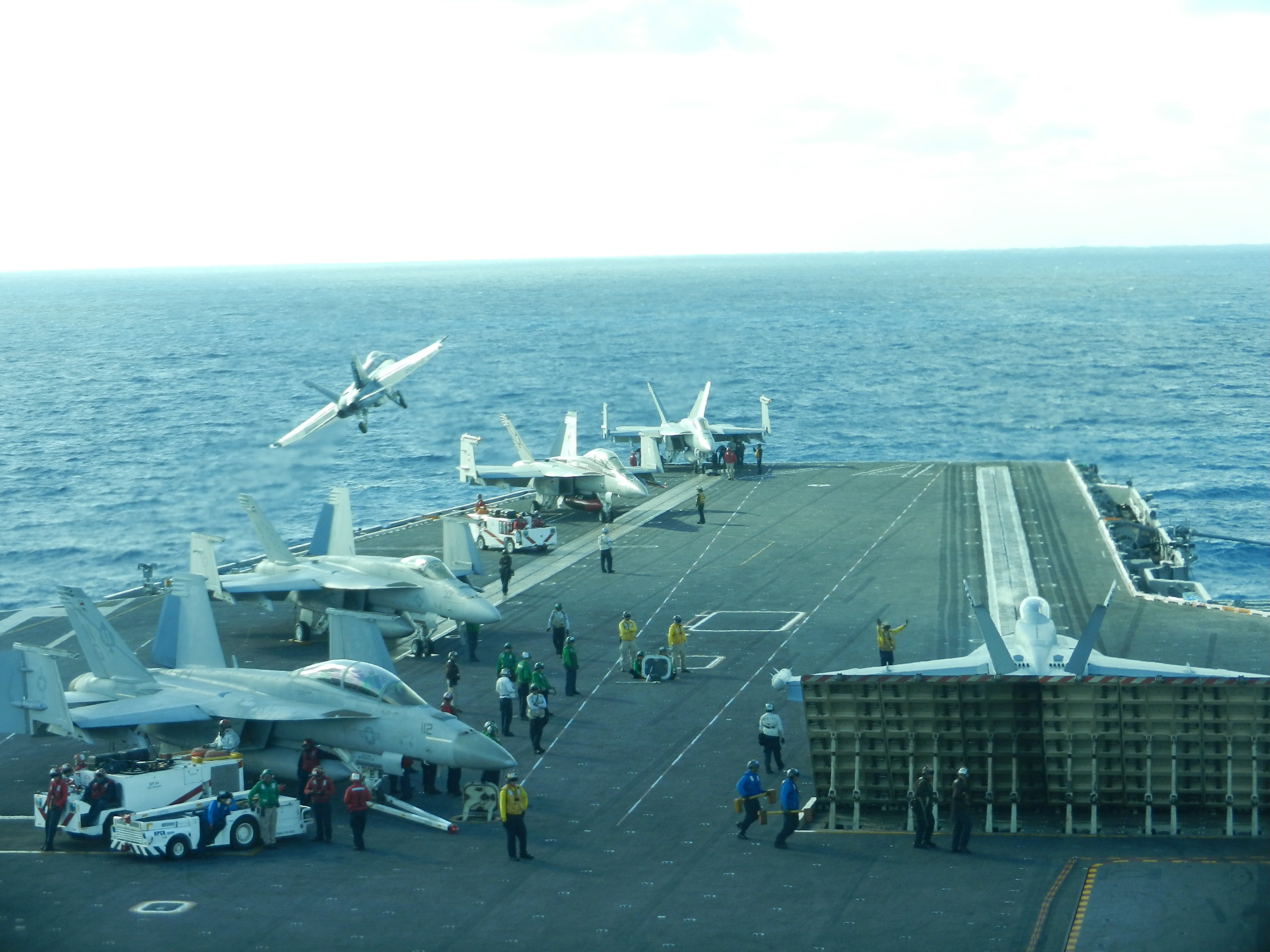 As USS John C. Stennis has gone through its pre-deployment certifications and workups, it is the first carrier to do so using the CANES network environment. USNI News photo.

Navy communications at sea will take a big leap forward in capability and capacity later this year. The service’s next-generation IT infrastructure, which promises faster connections and greater cyber security protections, will be tested and deployed for the first time on an aircraft carrier, USS John C. Stennis (CVN-74).

Stennis is preparing for both a deployment in the fall and its five-year Board of Inspection and Survey (INSURV) examination in late July, and it will be the first aircraft carrier to do either with the Consolidated Afloat Networks and Enterprise Services (CANES).

Sailors aboard Stennis may notice faster and more reliable connections, but the real advantages of CANES are behind the scenes. It combines five legacy networks into a single environment that the Navy says is easier to defend from cyber attacks. It will eventually be put on surface combatants, amphibious ships and submarines, standardizing the computing environment across platforms to make upgrades easier and ownership costs lower.

The new IT backbone has been installed on 24 ships, with another eight in progress now, but Stennis – being the first aircraft carrier – was orders of magnitude more complex and challenging than the guided missile cruisers and destroyers that came before it, officials said.

Stennis began the CANES installation process in late 2013, when crews started ripping out the old network hardware. In February 2014 they began installing new firmware and servers, along with more than 30,000 feet of fiber optic cable and 100 miles of shielded Category 5 network cable, Stennis commanding officer Capt. Mike Wettlaufer told USNI News on June 18. In October, the installation was certified complete.

Wettlaufer said being the first carrier to go through the installation process has both perks and challenges. On the one hand, shore-based technical support and the training pipeline are still not fully developed, he said. But his crew has been part of the feedback loop meant to mature and improve those services, and therefore his crew has a more intimate knowledge of CANES than a typical crew might otherwise have.

“Our sailors are part of the development and the certification – it’s still ongoing – of the maintenance procedures for CANES. This is really unique in that our folks onboard are working very closely with the CANES support entities… to develop the preventative maintenance processes and the ongoing health-checking processes for CANES onboard the ship,” he said.
“They have been absolutely, totally involved in that. Our ITs, they know the system really very, very well. And we’re in the process, we just completed the maintenance evaluation by the program office, and with some other Department of Defense support, to evaluate our ability to maintain the system at the first basic level.”

In August, the ship will undergo an operational evaluation – conducted during the carrier strike group’s pre-deployment Composite Training Unit Exercise (COMPTUEX) – as a final and more robust test of their ability to operate, maintain and defend CANES.

Despite the challenges associated with being the first carrier to deploy with CANES, Wettlaufer said the ship was at-sea from March to early May and conducted a group sail with its strike group, part of which involved helping USS Freedom (LCS-1) and USS Higgins (DDG-76) certify for upcoming independent deployments.

“Based upon that, I think you could probably say we’re well on the way to getting ourselves certified to deploy with the first operational CANES installation,” he said. 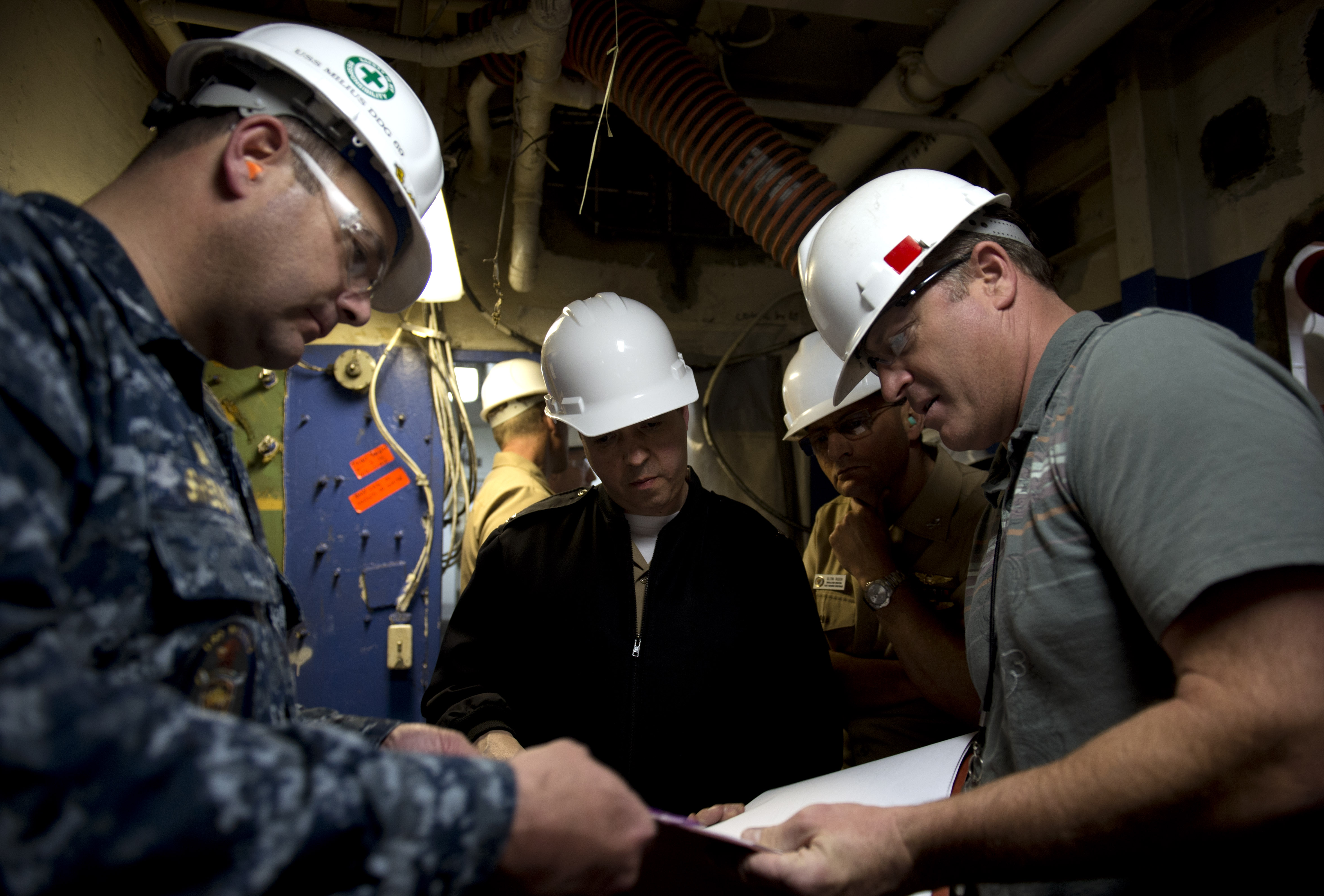 Whereas installing CANES on a destroyer averages about 158 days, Wettlaufer said the first carrier installation took “the better part of that whole 16 months” Stennis was in the shipyard for a maintenance availability. Some of the testing had to be completed after the ship left the yard, he added.

He noted that the aircraft carrier, which hosts the carrier strike group staff, the destroyer squadron staff and other organizations, requires a significantly larger infrastructure than any of the other ships.

Wettlaufer called his ship a communication hub “for both the goes-ins and goes-outs – the stuff we need to operate, information-wise, communication-wise, and the stuff we have to distribute from us to the rest of our strike group assets as well as to the fleet commanders and beyond.”

“There’s a significant scale difference between the two types of installs,” he added.

“You always learn a lot after the first one, and I think Reagan was a good example of really bringing a lot of the lessons learned from Stennis down to Reagan,” said Neagley, who oversees both installation and in-service support for CANES.

A successful installation starts with good planning, he said. The workers doing the installation need accurate drawings and other documentation, he said, and “once you do that once, you have the opportunity to refine the documentation based on those lessons learned from the first ship, make it easier for the second ship. So in the planning phase we were able to capture a lot of those kinds of lessons learned. There may have been something in the drawing where we got to the ship and it was a little bit different, so we changed the drawing to reflect the actual configuration. So all of those changes got captured for the next ship.”

Neagley’s team also learned that a lot of work could be done before getting to the ship – where there are lots of confined spaces, as well as numerous other teams trying to do other maintenance and modernization work in those same confined spaces. The more components that can be pre-fabricated on land, the better, he said.

“For example, some of the ventilation systems – we had the drawings, we could go pre-fab those in the shop, have them all ready to go, not have to do that work on the ship. So after we did the rip-out we could bring that pre-fabbed ventilation and ducting and just tack it up and be ready to go,” Neagley said.

The installation crew also learned how to more efficiently sequence the work, as well as when it was okay to have other crews working nearby and when they needed the space to themselves.

“On Reagan in particular, we added an extra planner down there to help us coordinate the schedule with all the other work that was going on onboard, and that was pretty beneficial for us so we could keep track of the overall ship schedule and where we fit in the overall ship schedule to make sure that we deconflicted anytime – if two or three entities had to be in one space, that was coordinated ahead of time,” Neagley said. 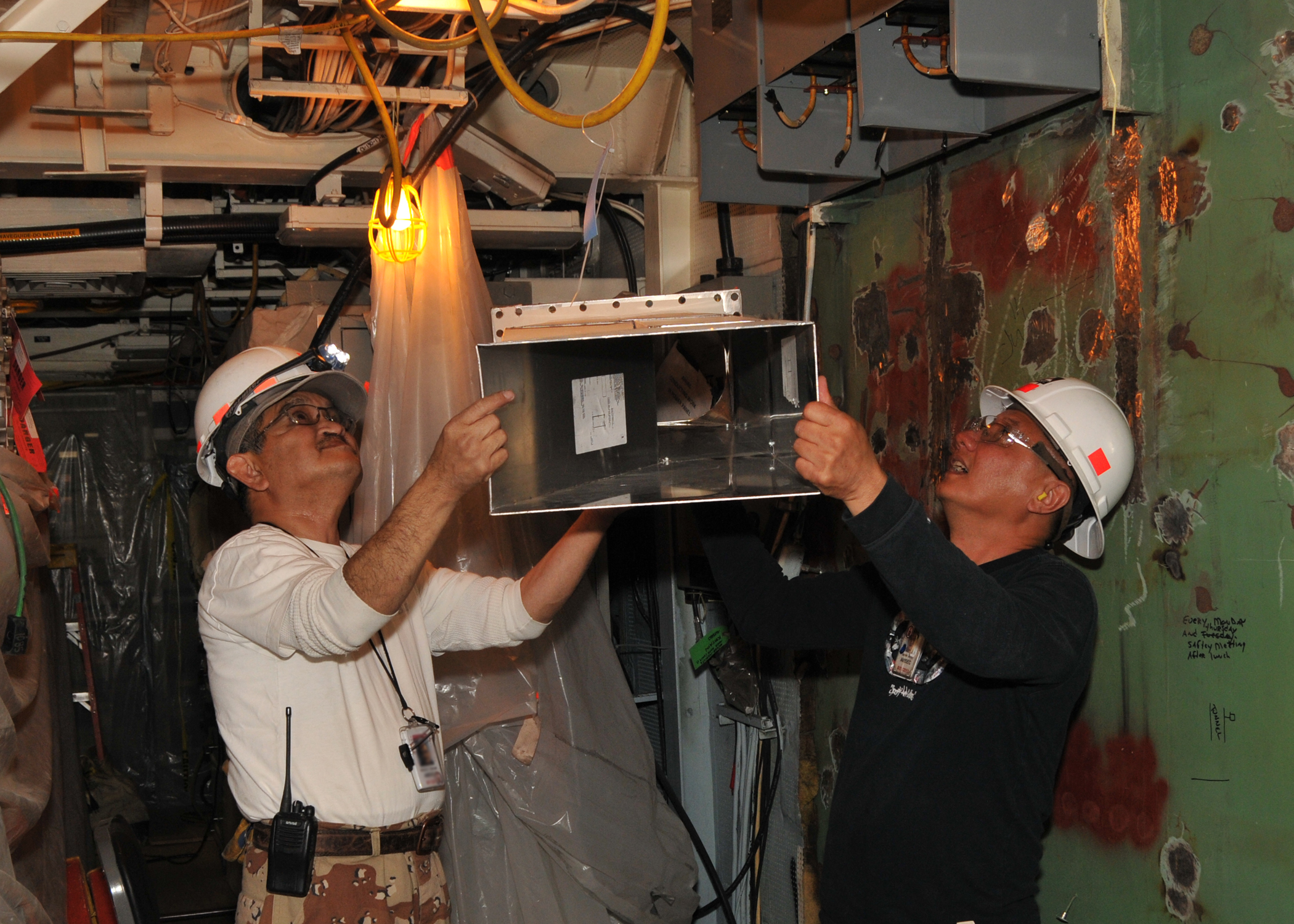 Neagley said the biggest time-savers came on the software loading and testing side of the effort.

“Probably one of the most significant differences between Stennis and Reagan was our ability to do more of the software loading inside the lab here at SPAWAR,” he said.
“So we were able to load more of the software in-house and do some more of that testing in-house before we got to the ship, and so that allowed our software team to work in this environment and make sure they got out all the bugs in the environment here before we loaded it up on the ship.”

Additionally, the team learned how to sequence the software uploads and tests more efficiently, too.

“As you can imagine, when you have all these systems that are connected to CANES, the order that you bring them up in and the order that you test them [matters]. We kind of optimized that on the second ship I think a little bit better,” Neagley said.
“That bought us probably the most time out of everything we’ve done.”

He added that sailors from Reagan were brought to the SPAWAR lab to watch and learn during the test phase. Getting their hands on CANES early helped, and he said he hopes to do that going forward when the ship’s crew is available. 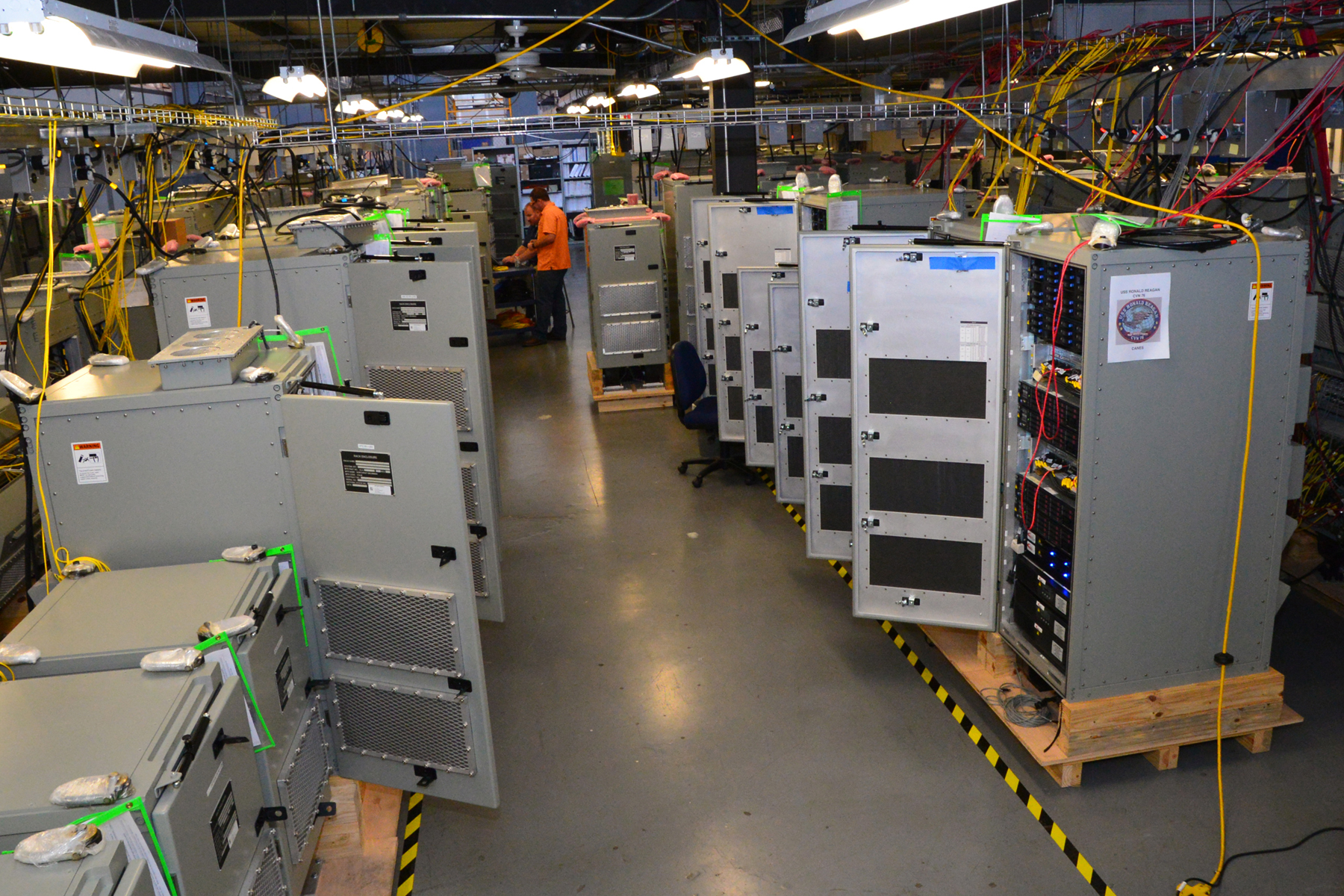 CANES units bound for installation aboard the aircraft carrier USS Ronald Reagan (CVN 76) are loaded and tested in the SPAWAR Network Integration and Engineering Facility prior to fleet delivery in June 2014. US Navy photo.

Wettlaufer, the Stennis commanding officer, said the CANES infrastructure – the training pipeline, the technical support ashore and even the logistics – won’t be fully ready when he deploys this fall, but he’s confident his sailors will be ready to go.

“Before we left the shipyard, we turned on the system I guess a little over a year ago. And from turning on the system and powering it up to operating at sea, we’ve certainly found areas where things didn’t work exactly right, but we’ve had very good support from SPAWAR and all the supporting organizations,” he said.
“When you’re the first one …. there’s going to be challenges in the supply system, whether or not it’s up to speed to support everything you need and all the other installations that are going on. Certainly that’s always a challenge. There’s going to be something we’re going to find – like, hey, we never interacted these two things together, oh my gosh there’s going to be a hiccup there.”

But Wettlaufer said that’s all okay. He said the training and shore support would get better as his crew helped inform them, and the installations would continue to get easier – and despite being the first, he wouldn’t have asked the Navy to do it any other way. Ramping up too quickly to try to have everything in place for the first ship is fiscally irresponsible, Wettlaufer said, since lessons learned still would have dictated changes.

Wettlaufer said CANES hosts more than 120 different systems that perform functions from warfighting to supplies and maintenance records management to pay and administrative functions. From a user perspective, he said the CANES environment would feel the same as any other information technology set-up when connecting to outside entities via the Internet, but the CANES intranet capability is vastly improved compared to the legacy network. Going forward, he said he looked forward to his crew and others learning how to “[use] the system to its utmost to internally communicate.”

These kinds of advancements – both finding new capabilities and addressing any newly discovered flaws – will be addressed in CANES’ “built-in tech refresh and obsolescence cycle,” Neagley said. The software will be updated every two years and the hardware every four years to keep up with new cyber threats and new capabilities that come along.