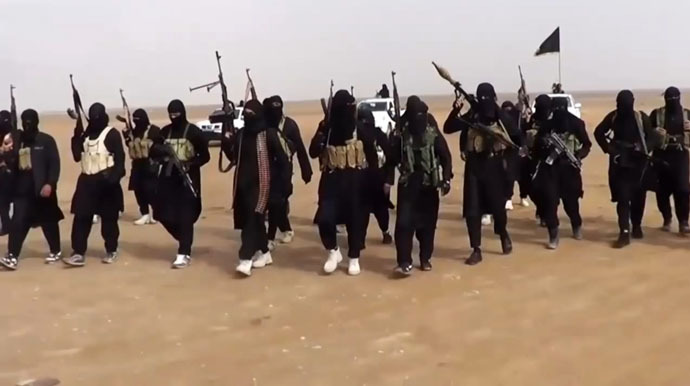 An image grab taken from a propaganda video uploaded on June 11, 2014 of ISIS. Photo via AFP

While putting combat brigades into the fight against the Islamic State in Iraq and Syria (ISIS or ISIL) is not feasible, four witnesses before a key House subcommittee didn’t shy away from calling for a larger military footprint—embedded U.S. forces in trusted units, a different approach to air strikes and using controllers on the ground—engaged in what all consider a long-term struggle.

Frederick Kagan, of the American Enterprise Institute, said, “The political situation is affected by what we do, the military situation” included. Testifying Wednesday before the House Armed Services emerging threats and capabilities panel, he added, “This is a war and any solution has to have a military component.”

While ISIS is resilient, Brian Fishman, of the New American Foundation, said it “is vulnerable to military power.” In his opinion, a diminished ISIS could still be a spoiler in Iraq and Syria because it would control territory “and inspiring jihadis [worldwide] to establish a caliphate.”

“This is going to be a long fight,” Fishman said, noting that for the United States it began in 2006 in Iraq and likely will continue for another decade.

But using metrics, such as “body counts” to measure progress in the struggle has limited value, Michael Eisenstadt, of the Washington Institute for Near East Policy, warned, because ISIS “can draw on manpower resources around the world.” While “attrition is not irrelevant,” he called the goal of destroying ISIS “unrealistic.” He added the real goal should be to overextend it in Iraq and Syria so it controls less territory and attracts fewer recruits.

Linda Robinson, of the Rand Corporation, said, “The brand [of the Islamic State] is so potent because (it has) been successful on the battlefield.” Not only should “information warfare [be] conducted by Muslim voices worldwide,” she said, the most effective narratives should come from “disaffected ISIL fighters” and “voices of families” of fighters who were either killed or became alienated.

“Being on the battlefield” provides credibility in any attempt to recruit new fighters or caution others away from extremism,” Fishman said.

The question of directly arming the Kurds in Iraq, a position favored in the House-passed defense authorization bill, drew notes of concern.

Kagan said the United States needs to be careful about overestimating the Kurds’ ability to take on the Sunni Arab jihadis. The Kurds “are not going to clear out [the Islamic State in] Anbar” province. It also could unintentionally send a signal that America leans toward an independent Kurdistan.

The “partner we need is Sunni Arabs” in rolling back the ISIS, he said. Referring to the Iraq War, Kagan said what the Islamic State fears most is a new “Sunni Awakening,” as when they rose up to fight al Qaeda in Iraq as the American military surge began.

Robinson said the Iraqi government of Prime Minister Ahmad Zahid Hamidi needs to incorporate more Sunnis into the battle, and they could be added to the national-security forces over time. “Thousands of Sunnis want to fight.”

The opening of a Saudi Arabian embassy in Baghdad was seen as a positive sign by the witnesses. The Saudis are regarded as leaders among Sunni states. The majority of Iraq’s population is Shi’ia.

As for countering Shi’ite Iran’s influence in Iraq and the region, Kagan said, “We are not offering them enough to turn down what the Iranians are offering them” in terms of equipment, training and leadership. He and others advised against lumping all Shi’ite militias together as being under Iran’s control.

“We will never be able to square the circle” of having a single coherent policy over Iran, Eisenstadt said, noting the continuing nuclear negotiations, different interests in the Syrian civil war and the toppling of the government in Yemen. But “we need to be a lot more forceful than we have” in spelling out the interests of the United States and its allies in the region.

“You don’t have to surrender every interest you have in negotiating with an enemy,” Kagan said.

The refugees pouring in Jordan from the fighting with the Islamic State pose a long-term threat to its political and economic fabric, Robinson said. “I doubt most of them are going back.”

Jordan “is a place where [the Gulf Sunni Arab allies] can contribute,” Fishman said. It is “a place where money matters.”