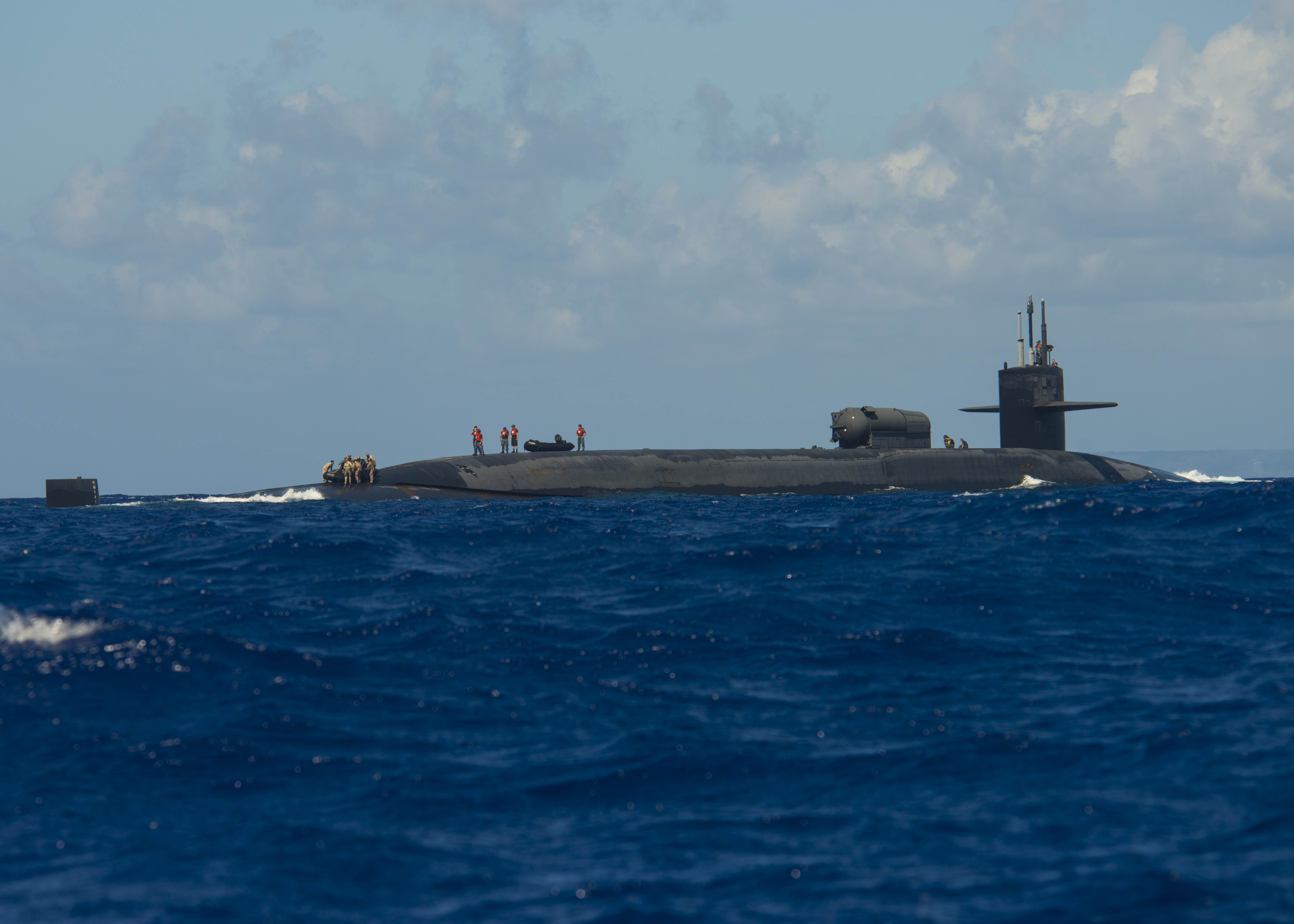 Marines from the 3rd Marine Reconnaissance Battalion prepare to disembark the guided-missile submarine USS Michigan (SSGN-727) during a small boat exercise in Apra Harbor, Guam, on March 24, 2015. US Navy photo.

The Navy selected the first 38 enlisted female sailors to serve aboard a submarine, the service announced on Monday.

Four chief petty officers and 34 petty officers were selected from a pool of applicants that spanned 31 different ratings both at sea and ashore, according to a Navy statement.

“We couldn’t be more pleased with the amount of interest shown by enlisted women in wanting the opportunity to serve in the undersea warfare domain,” Rear Adm. Charles Richard, commander of Submarine Group 10 and of the Enlisted Women in Submarines Task Force, said in the Navy statement.
“It’s an exciting time in the submarine force, as we continue to move forward in shaping the future of our force, drawing from the best pool of talent possible.”

The women who pass their medical screening will be sent to a tailored training pipeline – to include Basic Enlisted Submarine School in Groton, Conn., and technical training at “A” schools and “C” schools where applicable – before reporting to the Ohio-class guided missile submarine USS Michigan (SSGN-727), homeported in Bangor, Wash.

The 38 women were chosen through a competitive process based on the sailors’ performance in their current rating, their desired submarine rating assignment, the needs of Michigan’s two crews, and the overall needs of the Navy for rating community health, according to the statement, along with “performance evaluations, warfare qualifications, commanding officer endorsements, sea service time, physical readiness testing, and similarity of current rating to desired submarine rating.”

“There were many exceptional candidates who we were unable to select in this rotation simply because we did not have enough positions open on the first two crews,” Capt. Rod Hutton, deputy commander for the Enlisted Women in Submarines Task Force, said in the statement.
“These fully qualified Sailors have been placed on the alternate list and will automatically be considered when we select the next group in continuing to grow opportunities for women to serve in the submarine force. We look forward to reviewing their records again, as well as those of Sailors who want to add their names to the mix this summer and fall.”

The next round of applications will open next month. Sailors placed on the alternate list will be able to update their applications, and sailors who did not apply for the first round will be able to submit an application to serve aboard another Ohio-class sub, USS Florida (SSGN-729), homeported in Kings Bay, Ga.

In a blog post, Richard acknowledged the historic nature of the selection.

“I first want to thank you for your courage, initiative and interest to apply for the opportunity to join the submarine community,” he wrote. To those who were not selected, he said, “I want to encourage you to keep charging hard, as you are all hard-chargers for even considering this new, ground-breaking experience. There will be future iterations of enlisted female submariner selections made, so stay tuned for the announcement of the next application window planned for July of 2015.”

The Navy currently has about 50 female officers serving on submarines after the male-only policy was reversed in 2010. The transition was not without challenges, as late last year the Navy discovered that about a dozen male sailors on USS Wyoming (SSBN-742) had recorded and viewed video of female officers in the submarine’s shower.

The female enlisted sailors will join the Michigan crew in 2016, with two to four more crews welcoming female sailors each year through 2021.