One of Russia’s most prominent dissidents told the Atlantic Council on Wednesday that “the system built by [President Vladimir] Putin is contradictory” because it is “a centralized, vertical structure focused on one man” who can be limited in his view and distracted by competing demands.

Speaking in Washington, D.C., Mikhail Khordovsky, founder of Open Russia and exiled in 2013 for his opposition to the regime, said the contradiction also lies in a system that can easily mobilize resources for a single task, such as supporting Russian separatists in Ukraine, but “is limited by the number of tasks one person (Putin) can hold in his mind” at the same time.

Even though relations between the United States and Russia are at their lowest ebb since the end of the Cold War, Khordovsky, speaking through a translator, warned the West against making strategic agreements, including ones involving Ukraine, with such a regime. “There’s no guarantee they are going to be carried out.” He added, “Any decision can be changed by one person.”

Khordovsky, who once ran Russia’s giant oil company Yukos, said that for Putin now, the regime’s best choice in Ukraine is to “put a freeze on the conflict,” rather than call back the separatists or dramatically expand it.

While the West does not see the conflict there as one between the United States and Russia, he said 84 percent of the Russian people do.

“If arms start being shipped to Ukraine, transformation [in Western thought] will go” to believing it is a conflict between the two larger powers.

“Is the American administration ready to step into this conflict and win? It is impossible to scare someone” by threat alone. If there is no follow-through, the United States will appear to have been the loser, he said.

He said the long-term reality in Ukraine is it could turn into “a constant, constant conflict situation,” similar to that on the Korean Peninsula.

Capital “markets are already closed,” Khordovsky said, in answering a question on the impact of the first round of sanctions on Russia for its involvement in Ukraine. The later-imposed sanctions on technology “will become noticeable in the medium-term and long-term” if the West remains united in imposing them. He added that Putin said he expected the sanctions to ease within two years. 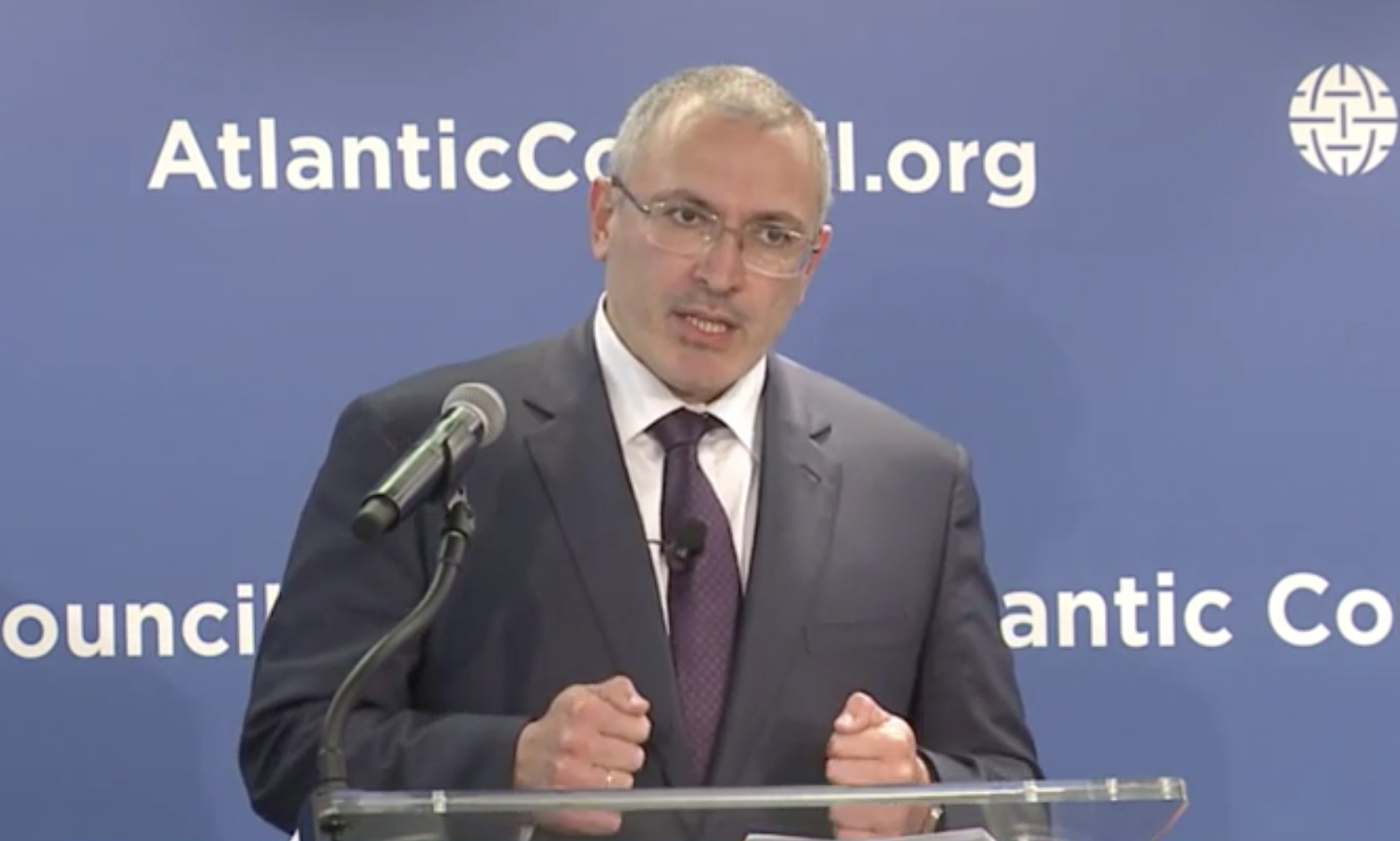 Mikhail Khodorkovsky at The Atlantic Council on June 17, 2015.

Khordovsky said the regime’s propaganda efforts have been very successful “in replacing one set of terms with another.” To retain power, “the ruling regime is in desperate need” to keep tensions high with the West, and the information war waged through state-controlled media does that.

But there is hope for the future that Russia could be a member of “The Euro-Atlantic” community and have access eventually to NATO and the European Union, he said.

“One hundred and twenty million [of Russia’s 140 million citizens] live in the European part of the country and the number is increasing” of those who say they support concepts such as an independent judiciary, the orderly transfer of power, and local control over spending.

“Russian citizens want to be confident about tomorrow.”

“I am in favor of Russian competing for leadership” in the post-Soviet space with neighbors such as Ukraine and Belarus, he said.

Even in a Russia without an authoritarian regime, Khordovsky did not see it returning Crimea to Ukraine or making compensation for its seizure in 2014. While the return of Hong Kong to Chinese control from the United Kingdom might be an example, he said the matter “won’t be solved quickly and easily” in Russia.

Khordovsky said examples of how countries can change by improving relations with the West include Germany, Japan, Italy, South Korea, and China, which led to better economic opportunities for their citizens and in most cases political openness.

In contrast, “Putin’s Russia is heading down the road to self-isolation.”

In answer to a question, Khordovsky said, “To my regret, part of the Russian bureaucracy is organized crime.” Citing his own experience as a prisoner, he said “from policeman to general,” they “were taking away property from people in jail” and “were not afraid of any consequences in doing this.” The practice continues today; he mentioned Chechnya as an example of how widespread corruption was.

But he did not predict an immediate collapse of the Putin regime and cited areas of common interest between it and the West—combating terrorism, the rise of Islamic extremism in the Middle East and the rise of China.