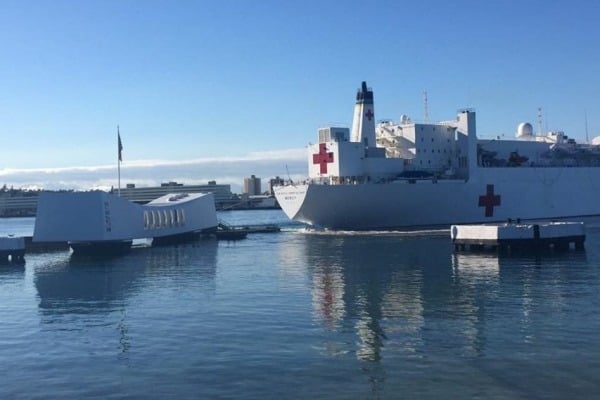 The Tuesday accident that damaged the floating dock of the USS Arizona Memorial did not damage the sunken World War II battleship on which 1,177 sailors and Marines died in the attack on Pearl Harbor, the Navy said late Thursday.

U.S. Navy hospital ship USNS Mercy (T-AH-19), which likely collided with the dock when transiting near the memorial, did not suffer obvious damage, according to the combined statement from the U.S. Coast Guard, Military Sealift Command, the National Park Service and Navy Region Hawaii.

The service is still unsure how the dock was damaged and the Coast Guard and the Military Sealift Command are mounting investigations.

According to the statement:

“Mercy was being maneuvered by two tugboats to transit Pearl Harbor from its berth at Hotel Pier as it prepared to go to sea. As the Mercy turned to head out to the channel, the ship may have made contact with the floating dock leading to the USS Arizona Memorial. Strong prop wash from the ship pushed the floating dock and access structure (brow) approximately ten feet toward the memorial, damaging handrails and the dock’s infrastructure.”

The service has started repair work on the dock with hopes of reopening the memorial next week.

“We are hoping to have all repairs done by June 3 so the memorial can be reopened to visitors June 4,” said Capt. Stan Keeve, Commander, Joint Base Pearl Harbor-Hickam, in the statement.

The following is the complete May 28, 2015 statement on the USS Arizona collision from Navy Region Hawaii, U.S. Coast Guard, the National Park Service and Military Sealift Command.

There was no damage to the remains of the USS Arizona vessel and no apparent damage to the Mercy. The memorial experienced minor superficial damage. There were no injuries.

The Navy removed the brow and immediately began repairing the above-water floating dock and access structure and evaluating the underwater mooring system of chains and concrete block anchors.

“We are hoping to have all repairs done by June 3 so the memorial can be reopened to visitors June 4,” said Capt. Stan Keeve, Commander, Joint Base Pearl Harbor-Hickam.

“We certainly appreciate the understanding of veterans, visitors and kama’aina,” he added. “Rest assured – we’re working closely with our partners at the National Park Service to safely reopen the USS Arizona Memorial as soon as we possibly can.”

Superintendent Paul DePrey said, “The National Park Service is working hard to provide visitors to Pearl Harbor with the most meaningful experience possible while the dock at the USS Arizona Memorial is being repaired. Harbor boats are still leaving every 15 minutes for Battleship Row, where the battleships were moored on December 7th, 1941. The public can view the USS Arizona from the boat. Visitors should also know that there are many other special Pearl Harbor historic sites to visit: the USS Oklahoma Memorial, the Pacific Aviation Museum, the USS Bowfin Submarine and the Battleship Missouri. Travelers should still expect to have a quality experience when they come out to Pearl Harbor.”

According to the Park Service, if visitors are seeking a contemplative experience at a Pearl Harbor memorial, another option is the USS Oklahoma Memorial, located on Ford Island adjacent to the Missouri Battleship. The normal $3 shuttle bus fee to Ford Island will be waived during the time that repairs are in progress at the USS Arizona Memorial. Visitors should inquire at the Pearl Harbor Visitor Center for complimentary shuttle tickets to access the USS Oklahoma Memorial.

The National Park Service and the U.S. Navy work in partnership to bring the public out to the USS Arizona Memorial. During the duration of the time that visitors won’t be able to disembark at the memorial, park rangers will be on the boats to provide historic interpretation and to answer questions. Visitation onto the memorial will resume as soon as it is safe to do so.

The Military Sealift Command will lead the Navy’s investigation.

The Coast Guard is currently conducting a marine casualty investigation. Maritime casualties involving credentialed mariners fall under the jurisdiction and authority of the U.S. Coast Guard.