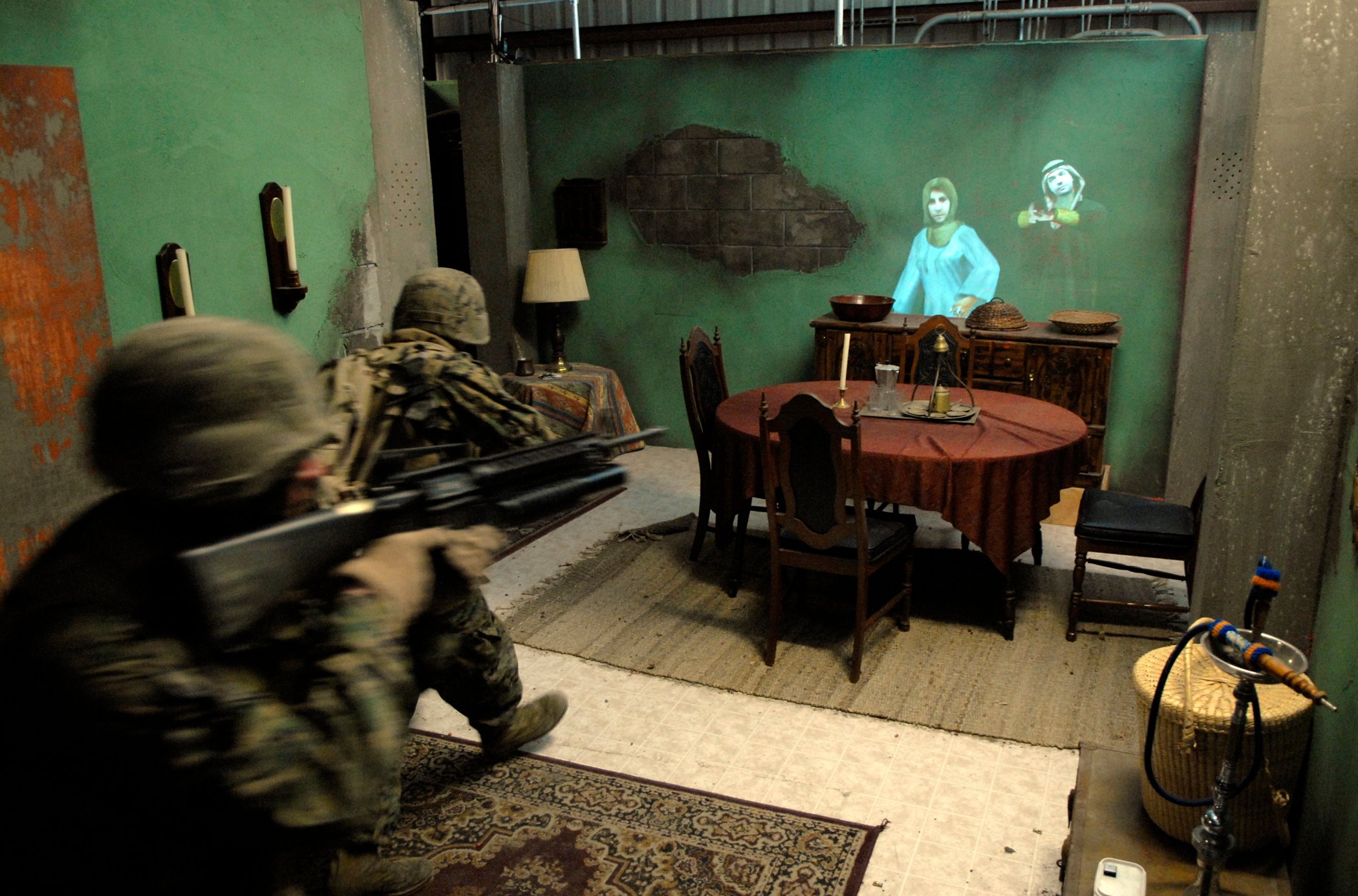 The Marine Corps should use simulators to the greatest extent possible, he wrote. But they need to cover all the right warfighting areas. And the service needs to ensure Marines get enough hours in the simulator. And the simulators need to align with training and readiness goals.

With a new focus on LVC training, the Marine Corps Training and Education Command (TECOM) is in the midst of several efforts to ensure its LVC training capabilities are supporting the right skills and in the right quantities.

The deep dive looks at all the simulators in use, what warfighting functions in the Marine Air-Ground Task Force (MAGTF) they support – maneuver, fires, intelligence, logistics and more – and at what levels, from individual to battalion and staff levels.

The subsequent chart this effort created, which Adams said is nicknamed the Rosetta Stone, pays particular attention to the areas highlighted by the commandant.

“He discussed he wants to see greater incorporation of simulation into training and readiness standards, … greater use of immersive simulation such as the Infantry Immersion Trainers and simulators that would provide realistic scenarios for the individual Marines,” Adams said.
“He wanted emphasis on small unit leader decision-making in every way possible that we could incorporate simulation to where that’s the first scenario the Marines are exposed to before they see something live.”

The Rosetta Stone is in staffing now, and once all the subject matter experts weigh in then TECOM can assess where the capability gaps are.

The commandant made clear in his guidance that he doesn’t just want LVC training incorporated into all warfighting functions, but that the training needs to support the Marines’ standards for full combat readiness.

“For a long while a lot of the simulators out there provided a great capability but weren’t necessarily linked to training and readiness standards, and that’s where a lot of this effort is currently underway to look at that,” Adams said.

To that end, the Marines are launching a massive effort at Camp Lejeune, N.C. this month to assess more than 20 warfighting areas to ensure the simulators available match the requirements laid out in the training and readiness (T&R) manuals.

“The idea is that we needed to take a comprehensive look at all the T&R manuals – literally every single event in the T&R manuals – against the capabilities of all the sims (simulators) that are currently fielded,” Potter told USNI News in the same interview.
“So we have to match current requirements for the Marines to train against what the simulators currently can do and say, using the subject matter experts, yes or no for each one of those events. And then, if yes, how much time is required in that sim to train that to standard.

“And then we will roll that up at the end of the week – so by the Wednesday following the end of that week, we will be able to give to [the commanding general of TECOM] a report out of that training and readiness manual,” he continued.
“This is how much simulator time we’re going to require as the numerator, the denominator being how much simulator time we have available. So then we will be able to assess where are we, how good and how much more of that are we going to need.”

“Those will all be combined into one because many of those events in those communities are the same,” Potter said.
“We don’t want them to independently assess and make different assessments of the sims. We want them all to come to consensus so that there’s a Marine standard on employing that sim.”

Potter said the exact number of SAWGs is in flux, but he expects about 20 to take place, one after the next, all summer at Camp Lejeune.

Notably missing from the lineup is aviation. Adams said the aviation community is far more advanced in its simulated training capability than other communities in the MAGTF, so this effort will hopefully help the ground, logistics and other sections of the Marine Corps catch up.

At the end of the five-month period, the SAWGs will have made recommendations on each warfighting area regarding whether simulation training is adequate, more is needed or a better simulator is needed. The budgeters in TECOM will ultimately have to decide how to allocate resources to fill in any gaps, Potter said. In some cases, there may be enough simulators but the Marines will need more contractor support to run the simulators for more hours a day, he said. In other cases, the Marine Corps may need to invest in more simulators.

In TECOM’s capabilities division, an acquisition effort is underway to take the existing simulators – which will be verified as meeting training and readiness requirements – and tie them together to create a more holistic MAGTF training experience.

Antonio Smith, capabilities division operations officer, told USNI News that his division is “federating existing simulators … so that we can have a distributed Live Virtual and Constructive Training Environment.”

The simulators themselves already exist, and Potter’s standards division is ensuring the simulators teach the right lessons. But Smith wants to build an architecture to tie them all together.

“In our minds you’re able to do better collective training – for example, if you have a pilot in his aircraft simulator and then you have a Marine in the virtual battlespace too doing close air support or something, if you’re able to interconnect the two that makes collective training so much better,” he said.
“That just adds so many more realistic variables. … If you’re training in a system, that’s not as bad – the aircraft is going to show up on time. But when you’re training with a pilot in another station, it adds some more variables. You’ve got to get your communications up, he’s got to be on time.”

Maj. James Reynolds, the capabilities division’s modeling and simulation section head, said another key benefit of collective training is that important relationships are formed between Marines training in different parts of the country. Individual training in a simulator only lets a Marine interact with the computer and the officer or contractor running the training event. Collective training puts Marines in contact with other Marines who they might find themselves in a combat zone with down the road.

Smith said the next step in created the LVC Training Environment is the analysis of alternatives, which should wrap up at the end of this year or early 2016. The AoA will generate various packages for leadership to choose from, Smith said, stressing that not all the simulators will be connected but that those that should be interconnected will be.

“While we’re making systems interoperable and federating systems, another major goal of the commandant is to make sure we continue to integrate the MAGTF, so that’s something that’s important,” Smith said.