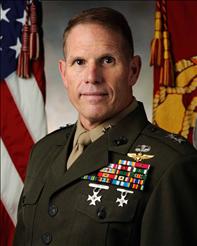 Marine Corps Maj. Gen. Robert Walsh, currently the director of expeditionary warfare in the chief of naval operation’s office, will be promoted to lieutenant general and take over as commanding general of the Marine Corps Combat Development Command (MCCDC), according to a defense department announcement.

Walsh’s new job will also include the titles of deputy commandant for combat development and integration and commander of U.S. Marine Forces Strategic Command. The promotion requires Senate approval.

Walsh has been involved in the requirements and resourcing of several amphibious and auxiliary ship programs at the Pentagon, and he serves as the co-chair of the recently created Auxiliary Platforms and Payloads Council to identify and test out opportunities to leverage Military Sealift Command platforms in new ways. This promotion would move Walsh to Marine Corps Base Quantico to oversee development of the operational concepts for these same platforms.

Lt. Gen. Kenneth Glueck now serves as the head of MCCDC, and the Marine Corps has not announced his next assignment yet. With rumors swirling that Commandant of the Marine Corps Gen. Joseph Dunford may become the next chairman of the Joint Chiefs of Staff, a number of options are being considered for top Marine Corps officers. Aside from Dunford, there are only two active four-star generals – assistant commandant Gen. John Paxton and U.S. Southern Command commander Gen. John Kelly, Marine Corps Times reported. A Dunford promotion to Joint Chiefs chairman could therefore necessitate promotions within the current lieutenant general corps.

Walsh, who is also an advisor to the U.S. Naval Institute board of directors, graduated from the U.S. Naval Academy in 1979 and flew the McDonnell Douglas F-4 Phantom before later transitioning to the Boeing F/A-18 Hornet. He has served as assistant deputy commandant for aviation, deputy commanding general for MCCDC and director of operations for U.S. Northern Command, among other recent assignments.