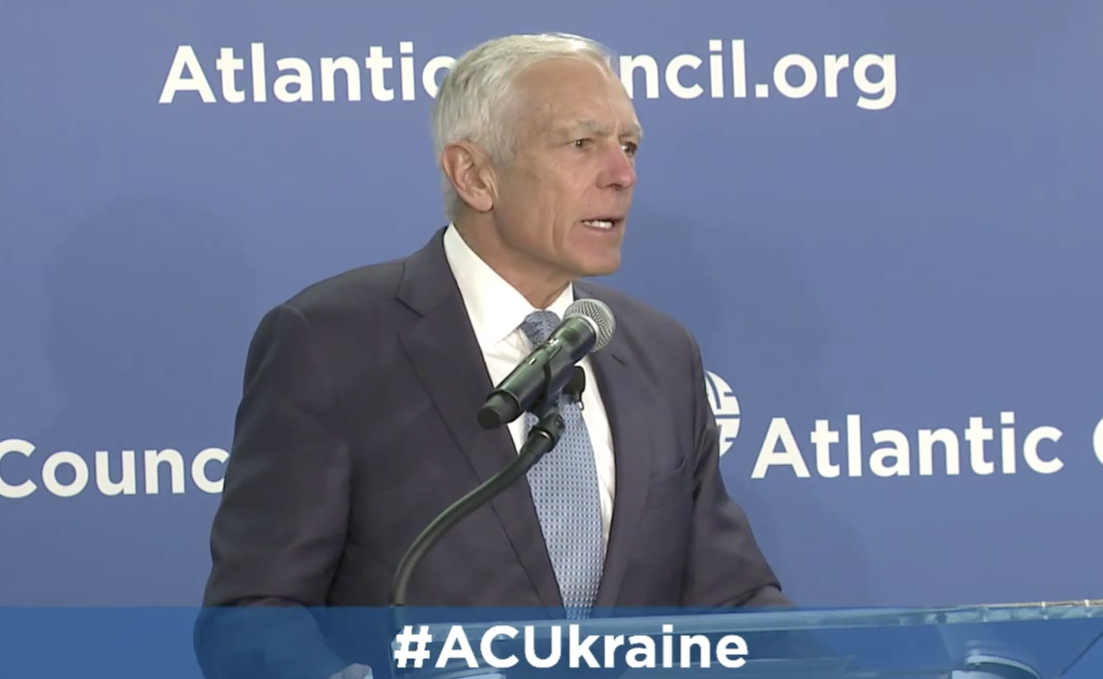 The Russians and Russian-backed forces in Ukraine are poised to launch a new offensive, probably between Orthodox Easter and before V-E Day in early May the former supreme commander of NATO Forces said in a presentation at The Atlantic Council.

Speaking Monday in Washington, D.C., retired Gen. Wesley Clark, USA, said the United States should at least be preparing an assistance package for Ukraine—including lethal weapons—and have it staged at Pope Air Force Base, N.C.

“We’re dealing with the Ukrainian military and not the Iraqi army”—which could use the weapons with American training and assistance, Clark said.

“Promise it, promote it”—to deter further Russian aggression and reassure allies and partners in the region. “It would be like a shot of adrenaline when it comes.” He believes “a lot of it would get into the field quickly.”

Clark said building such a package—which would include Javelin anti-tank weapons, night-vision goggles, better intelligence collection and analysis— would be similar to what the United States provided Israel in its October 1973 war.

He said there are between 8,000 and 9,000 Russian forces in Ukraine working directly with the separatist organizations and now leading them, providing intelligence and some maneuver forces crossing the border with tanks to assault Ukrainian positions. There are another 50,000, across the border, which have fired long-range artillery rounds into Ukraine, and an additional 50,000 in Crimea (which Russia seized last year) that could be linked up with separatists already in place.

Clark said the Russian view of Ukraine and other nations in Eastern Europe is that “If it’s not theirs, they want it.” He said that attitude, dating from the end of the Cold War in the early 1990s, stirs fears in Eastern European countries, including NATO allies.

Russian President Vladimir Putin “has one single focus—to bring Ukraine back into Russia’s orbit.” He is trying to do that through hybrid warfare—terrorism conducted by Spetsnaz [special forces]; irregular forces employing “Russian mercenaries [and] Russian thugs” organized by Russian military intelligence; and Russian peacekeeping forces advancing and then de-escalating the crisis—allowing negotiations that led to two agreements in Minsk. The pacts stopped the fighting at least temporarily.

The longer-range Russian objective is to drive a wedge between the United States and Western Europe and between Western and Eastern Europe that could lead to collapse of some of those governments, he said. “NATO is a good bogeyman” in stirring up Russian support for Putin’s moves in Ukraine. Clark said the reality is that the alliance “never had a plan to attack” Russia.

While the Ukrainians “pulled back their heavy weapons systems” after the cease-fire agreements, the Russian-backed forces stayed in place or received additional supplies and men from across the border.

Clark, who has made seven trips to Ukraine in slightly more than a year, said that while thus far Russian aircraft have not been used in the fighting, the Ukrainians are having to cope with three successive layers of unmanned aerial vehicles providing real-time intelligence, jamming, “and a whole lot of other high-tech weapons that we haven’t faced in the Middle East.”

With each new offensive, “the Russians have adapted,”—such as “moving into separatist organizations from top to bottom” militarily, and changing tactics economically and politically through the crisis.