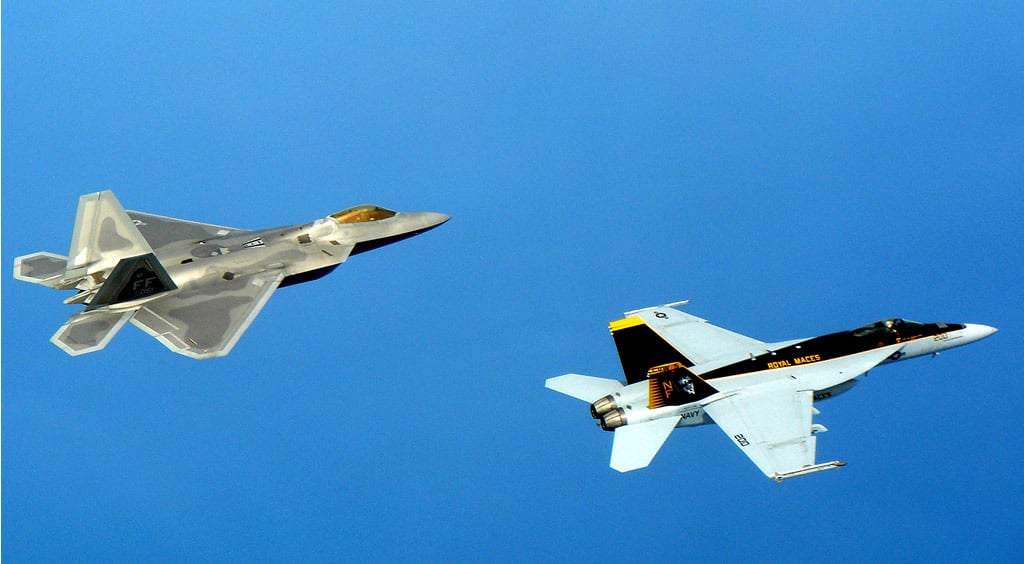 The Navy and the Air Force could team up for their early look into their next crop of fighters due out in 2030, the Navy’s director of air warfare told USNI News on Thursday.

Starting next year, the two services are in a position to set out on a joint analysis of alternatives (AoA) for the follow on to Navy’s Boeing F/A-18E/F Super Hornet and the Air Force’s Lockheed Martin F-22 Raptor air superiority fighter, said Rear Adm. Mike Manazir to USNI News following a House Armed Service Subcommittee on Tactical Air and Land Forces hearing on combat aviation.

“We’re partnering with the Air Force in their F-X program,” he said.
“We are pressing forward — subject to guidance from [Office of Secretary of Defense] (OSD) — and we are looking at doing a joint analysis of alternatives (AoA) so we can look at similarities and differences. We’re allowed to take a joint AOA and then define a service solution that would be good for each service.”

As part of the Fiscal Year 2016 budget, the Navy has set aside $5 million to start the F/A-XX work — planned to replace the Super Hornets in the 2030s.

“We feel we need a replacement for the gaps that will occur when the F-18 E and F Super Hornet — and somewhat the [EA-18G Growler] as well — start to go away from their service life perspective in about 2030,” he said.

The AoA — for the Navy — will focus replacing the capabilities of the fighter with a wide-range of options.

“So what we would look at is everything — from an airframe, to a family of systems, to continuing something we already have flying, to capabilities that we already have in the air wing or the joint world — to asses what we really need to replace the Super Hornet,” Manazir said.

The AoA will run in parallel with several other design and technology efforts across several agencies.

“We’re advancing engine technology. We’re working with academia, industry, other services — the weapons labs in the services to advance that technology. We’re also advancing technology in outer mold lines for airframes for faster air speeds from traditional airframes — trying to make them go faster for the fight. Obviously broadband stealth and IR stealth, the capabilities we could put into coatings, ways you could use electromagnetic energy, ways that you could dominate the EM spectrum a little better,” Manazir said.
“All of those things are so vexing now, we’re advancing the technology to the point where we get into the development phase and evaluating alternatives — those technologies the hardest are advanced to a point to where we can start to use them.”

While a plethora of options exist for the program, Chief of Naval Operations Adm. Jonathan Greenert expressed an outlook for a next generation fighter that would not be as dependent on stealth and speed but more on its ability to field future weapon systems.

“It has to have an ability to carry a payload such that it can deploy a spectrum of weapons. It has to be able to acquire access probably by suppressing enemy air defenses, Greenert said in February.
“Today it’s radar but it might be something more in the future.”

Part of the F/A-XX calculus will be based on how the Lockheed Martin F-35C Lighting II Joint Strike Fighter (JSF) will function in the Navy’s carrier air wings.

The F-35C is understood to be a critical node in the Navy’s Naval Integrated Fire Control Counter Air (NIFC-CA) concept as a forward sensor node for the rest of the carrier strike group (CSG).

“We don’t even quite know what the F-35 is going to bring to us — that fifth generation capability — and when we start to integrate it with the other things we have in the air wing — the Growler, with E-2D, with Super Hornet — that integrated capability is greater than just what the platform can do,” Manazir said.
“It might be that we find things in the F-35 that will lend itself to the generation after that.”