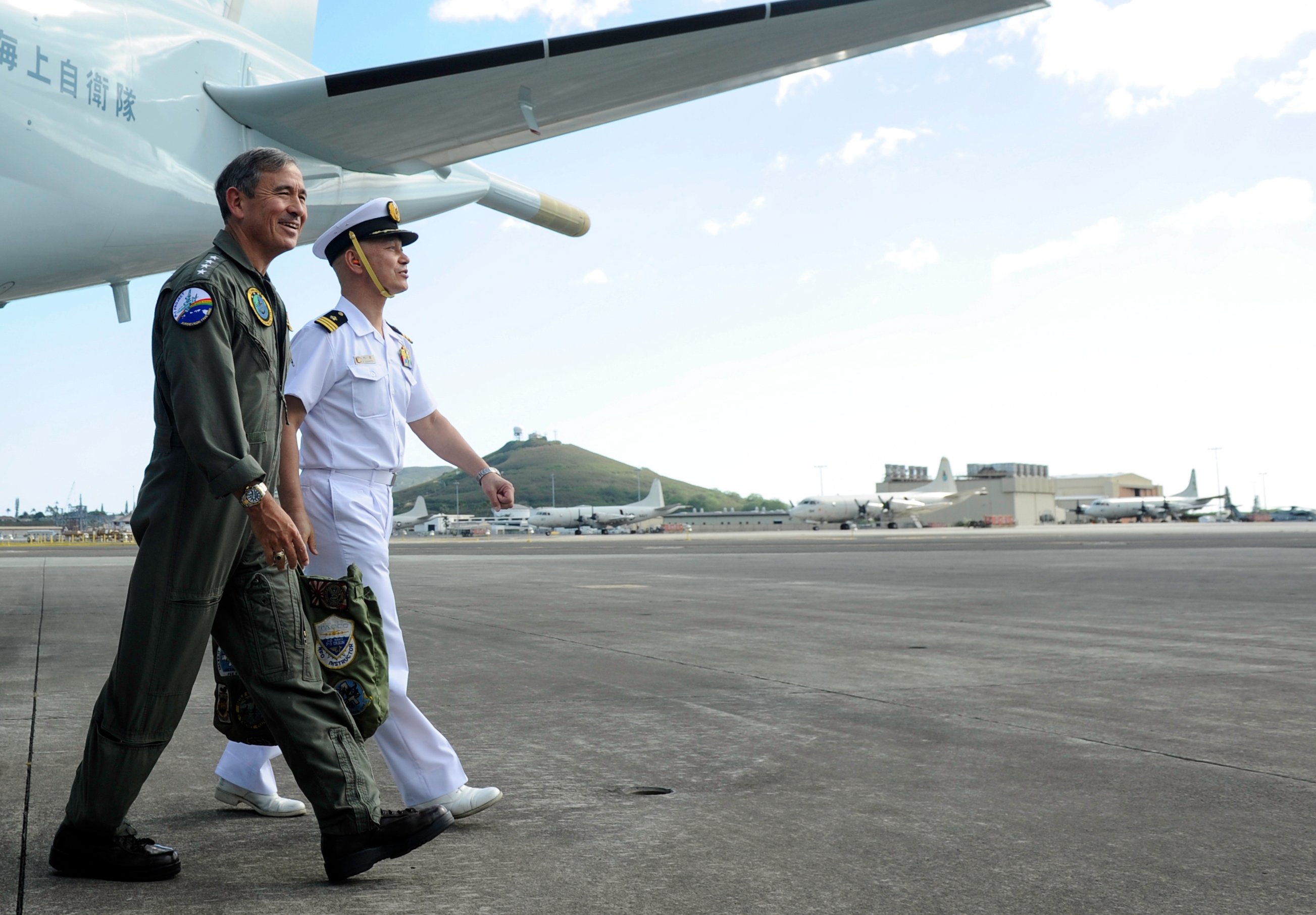 The incoming U.S. Pacific Command (PACOM) commander, Adm. Harry B. Harris, testified before Congress late last year that “China’s rise as a regional military and global economic power, and in particular, its rapid military modernization and assertive behavior toward regional neighbors present opportunities and challenges that must be managed effectively. This is our most enduring challenge.”

To meet that challenge, the U.S. Navy should explore establishing an International Maritime Operations Center (IMOC) headquartered in Indonesia to showcase the Navy’s commitment to the Asia-Pacific, monitor maritime developments in the South China Sea and Indian Ocean and serve as a new mechanism to meet China’s rise.

The People’s Liberation Army Navy (PLAN) has increased efforts to build indigenous submarines and ships, intends to operate three aircraft carriers, and maintain offensive maritime land based missiles such as the DF-21D, an anti-ship ballistic missile. Of those developments, the increase in submarine capability has a significant role in conducting anti-access, area denial operations. By 2020 the PLAN will operate more than double the number of submarines in the Asia Pacific compared with 60 percent of U.S. submarines forward-deployed. The number of total PLAN submarines is substantial, but the mission types and geographical location of those operations are equally important.

The PLAN has extended surface and submarine operations beyond China’s coastal shores and may continue those operations for the foreseeable future. Since 2009, the PLAN has demonstrated continuous surface ship operations and improved at-sea logistics in the Indian Ocean. The PLAN during the 2013-2014 time period also took steps to increase naval operations in the Indian Ocean with three separate out of area nuclear and diesel submarine deployments—a possible new trend similar to how PLAN have sustained surface ship operations. 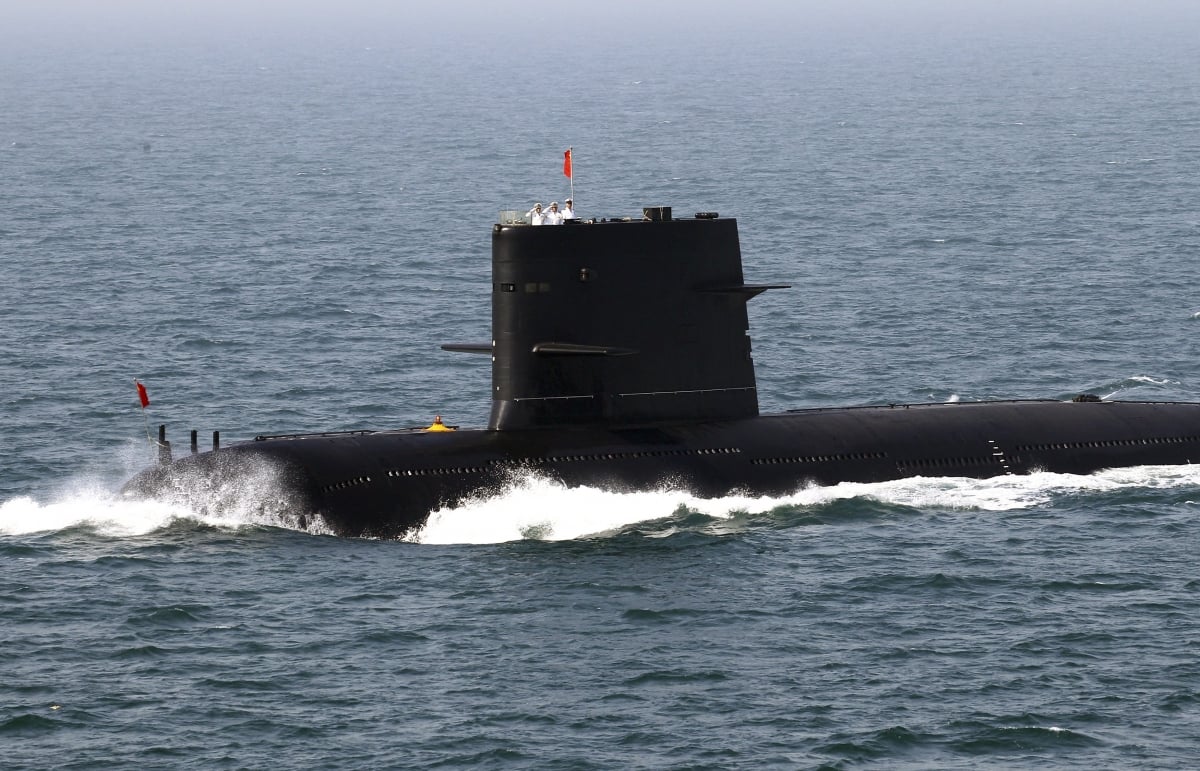 While the PLAN operates forward in the Indian Ocean, China has simultaneously built a robust civilian maritime presence in the South China Sea. The State Oceanic Administration (SOA) is an enormous Party-run organization with two essential tasks worth noting: law enforcement of territorial maritime claims, and undersea exploration and surveillance. The SOA manages the China’s coast guard (CCG) and other maritime entities that could have more than 500 ships by 2020. The SOA provides the Party leadership with a “first use policy,” which allows the CCG to protect territorial claims like Scarborough Shoal in the South China Sea while the PLAN provides forceful backup if tensions should escalate. In addition to law enforcement, SOA ships provide undersea surveillance—a useful capability to find natural resources and better understand the water column for submarine operations.

China has also embarked in other military activities in the South China Sea and Indian Ocean to increase maritime presence. The PLAN is in the process of dredging and expanding maritime features such as Fiery Cross Reef in the Spratly Islands. The construction improvements could serve as future logistic hubs for naval surface or subsurface assets, landing strips for aircraft, or areas for permanent offensive or defensive land-based weapons. In 2014, China’s naval chief, Admiral Wu Shengli, visited several reefs aboard a PLAN ship to observe the reclamation progress—a vision he set forth in 2004 as head of China’s South Sea Fleet. In 2014 during Chinese President Xi Jinping’s official visit to Sri Lanka, the PLAN confirmed Colombo as a logistics port for submarine out-of-area deployments. The PLAN does not have permanent naval bases in the Indian Ocean, but has established strong economic ties with nations such as Sri Lanka, Yemen, Pakistan, and others to support forward deployed naval operations.

Coalition Building and the Maritime Commerce

The strategic rebalance has long been a focus of policymakers in Washington and was reiterated recently again by the Obama administration’s 2015 National Security Strategy. The new strategy highlighted China’s military modernization and the potential for intimidation in territorial disputes. The new strategy also advocated that the United States will “manage competition from a position of strength” and “will closely monitor China’s military modernization and expanding presence in Asia, while seeking ways to reduce the risk of misunderstanding or miscalculation.” 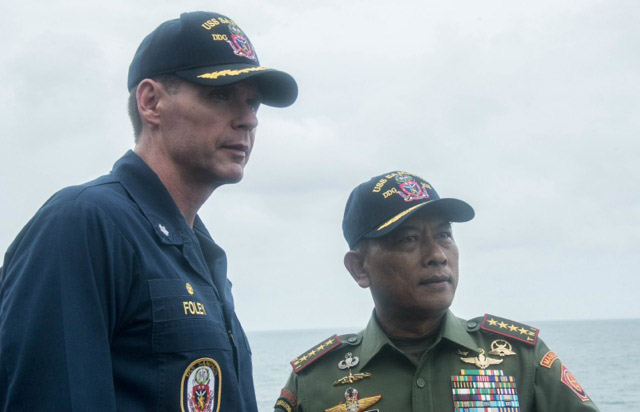 As part of the rebalance strategy, the U.S. Navy should establish an IMOC located in Jakarta, Indonesia, to monitor the Indian Ocean and the South China Sea. The IMOC would serve as the primary link to enhance maritime relations with the Indian, Indonesian, and Southeast Asian maritime forces. An operations center supported by international navies is a familiar concept in key maritime areas. In Bahrain, the Combined Maritime Forces exists as a multi-national naval partnership consisting of 30 nations to promote security, stability and prosperity in the maritime domain. In Norwood, United Kingdom, as part of NATO, the Allied Maritime Command operates two key organizations: a 24/7 operations center for permanent command and control of NATO maritime operations, and a shipping center to provide dialogue and coordination with the shipping industry about potential threats.

An IMOC also provides a forward presence and an increased capability to manage the protection of maritime commerce—the single most important variable in the Asia Pacific. The 2015 National Security Strategy echoed that and stated the United States will “maintain the capability to ensure the free flow of commerce, to respond quickly to those in need, and to deter those who might contemplate aggression.” The statistics about the maritime economy are well known. For example, more than 90 percent of world trade is carried by sea and approximately $5 trillion of ship-borne trade or nearly 30 percent of maritime trade transits through the South China Sea alone.

China understands the economic importance that both the South China Sea and Indian Ocean have to the livelihood of almost every Chinese—approximately 84 percent of China’s total energy imports are required to transit through the Strait of Malacca. President Xi has also made maritime development a cornerstone element of his presidency by offering the building of the 21st-Century Maritime Silk Road—“a system of linked ports, infrastructure projects and special economic zones in Southeast Asia and the northern Indian Ocean.”
China has increased economic developments in the South China Sea and Indian Ocean. In 2014, China operated oil platforms in the vicinity of Vietnam with several CCG ships nearby for protection purposes. President Xi has made trips to Sri Lanka and Maldives investing billions in infrastructure projects. In late 2012, China also advocated for the Regional Economic Comprehensive Partnership (RCEP), a Free Trade Agreement (FTA) encompassing ASEAN nations, but failed to include U.S. participation. 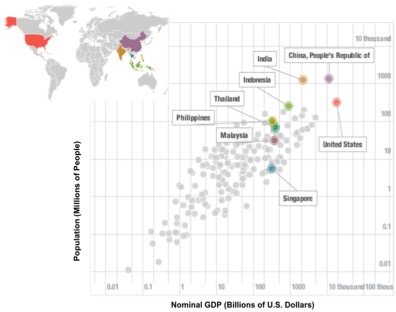 There are several locations in the Asia Pacific, such as Singapore, that could serve as the IMOC headquarters, but Indonesia offers unique strategic attributes. First, compared to other Asia Pacific nations, Indonesia’s economy is the fourth largest in the Asia Pacific behind China, Japan, and India. (See the graphic illustrating Indonesia’s GDP in comparison to other Southeast Asia nations) Given Indonesia’s economic influence, the U.S. government should embark on an aggressive campaign to improve bilateral trade relations and include Indonesia as part of the Trans Pacific Partnership, which is a proposed trade agreement with 11 nations and considered the foundation of the Obama Administration’s Asia Pacific economic policy.

Second, Indonesian President Joko “Jokowi” Widodo desires his nation to become a primary player in the maritime domain. After assuming the presidency, he stated, “Thus, as a maritime country, Indonesia should assert itself as the World Maritime Axis. This position opens opportunities for Indonesia to develop regional and international cooperation for the prosperity of the people.” To help promote this renewed maritime focus, President Jokowi has proposed increasing military spending by 1.5 percent of Indonesia’s total GDP. In addition, he has published a maritime doctrine with five pillars to advance his quest and establish Indonesia as the maritime “fulcrum.”

President Jokowi recognizes with a limited budget, foreign investment plays a critical role in achieving success and has said, “So we need investment, we need investors, to boost our economic growth, to build our deep seaports, to build our airports.” As President Barak Obama enters the last years of his administration, a strategic opportunity exists to establish a meaningful relationship with Indonesia to improve economic development and maritime security. President Obama could lean on his strong personal ties to Indonesia—he lived there during his childhood and his mother worked there for more than 20 years. President Obama’s actions toward Indonesia are crucial to support President Jokowi’s vision and will also require buy-in from Congress to boost Indonesia’s economy.

Third, Indonesia can emerge as a beacon for democracy in a time period where Southeast Asian nations such as Thailand are struggling with political unrest. Indonesia is the third largest democracy in the world behind India and the United States respectively. In 2014, 50 percent of the population was reported under the age of 30 and the working-age population will grow by 14.8 million by 2020. Those demographics offer an opportunity to spur interest in democratic ideals and open market economies.

Fourth, the IMOC’s location in Indonesia serves as a central point for maritime operations in the Asia Pacific. The U.S. Navy relies on one Fleet Commander (7th Fleet) in Yokosuka, Japan, to oversee 48 million square nautical miles and sustain relationships with 35 nations. This enormous responsibility and sheer size of the Asia Pacific requires several nodes throughout the theater to maintain a robust maritime domain awareness. By adding an IMOC in Indonesia, the Navy can further leverage and integrate partner nations to monitor the maritime domain from the center outward.

Even though Indonesia provides strategic attributes for an IMOC, the maritime nation has several shortcomings moving forward. The most critical is a suitable infrastructure—specifically ports and roads. Last year the World Bank issued an Indonesia Development Policy Review and cited the specifics of the infrastructure gap. The report indicated that Indonesia’s “port capacity remains very limited” and “compares poorly with other developing Asian countries on trade logistics measures.” In addition, the report offered that Indonesia’s roads have faced a decade of under-investment, which has “contributed to serious capacity gaps, congestion problems and poor logistics performance.” The World Bank has projected $120 billion (U.S.) is required to improve Indonesian roads.

President Jokowi seems to have the right vision to improve Indonesia’s poor infrastructure, but faces other hurdles in the coming years as well. He will have to narrow the skills gap in the labor market, improve the functioning of several public and private markets, fight the potential threat of international terrorism, thwart corruption, and maintain the support of approximately 220 million Muslims and numerous ethnic groups speaking more than 700 different languages. In addition he will need to answer his nation’s past history of human rights abuses. In 2014, Indonesia failed to report previous human rights violations to the United Nations and was questioned earlier this year about the nation’s commitment for resolving those issues. Regardless of Indonesia’s shortcomings, the nation is at a unique historical crossroads as a rising Asia Pacific nation.

The United States has a difficult challenge to rebalance towards the Asia Pacific and monitor China’s maritime rise. More important, the nation has made a commitment to allies and partners that must be followed by actions or the potential loss of credibility will ensue. During his trip to Australia in 2011, President Obama commented, “So let there be no doubt: in the Asia Pacific in the 21st century, the United States of America is all in.” If the United States is “all in” in its rebalance towards the Asia-Pacific, the Navy with the assistance of Congress and the Obama administration should explore ways to do more as China further advances its interests and influence in the Indian Ocean and the South China Sea.