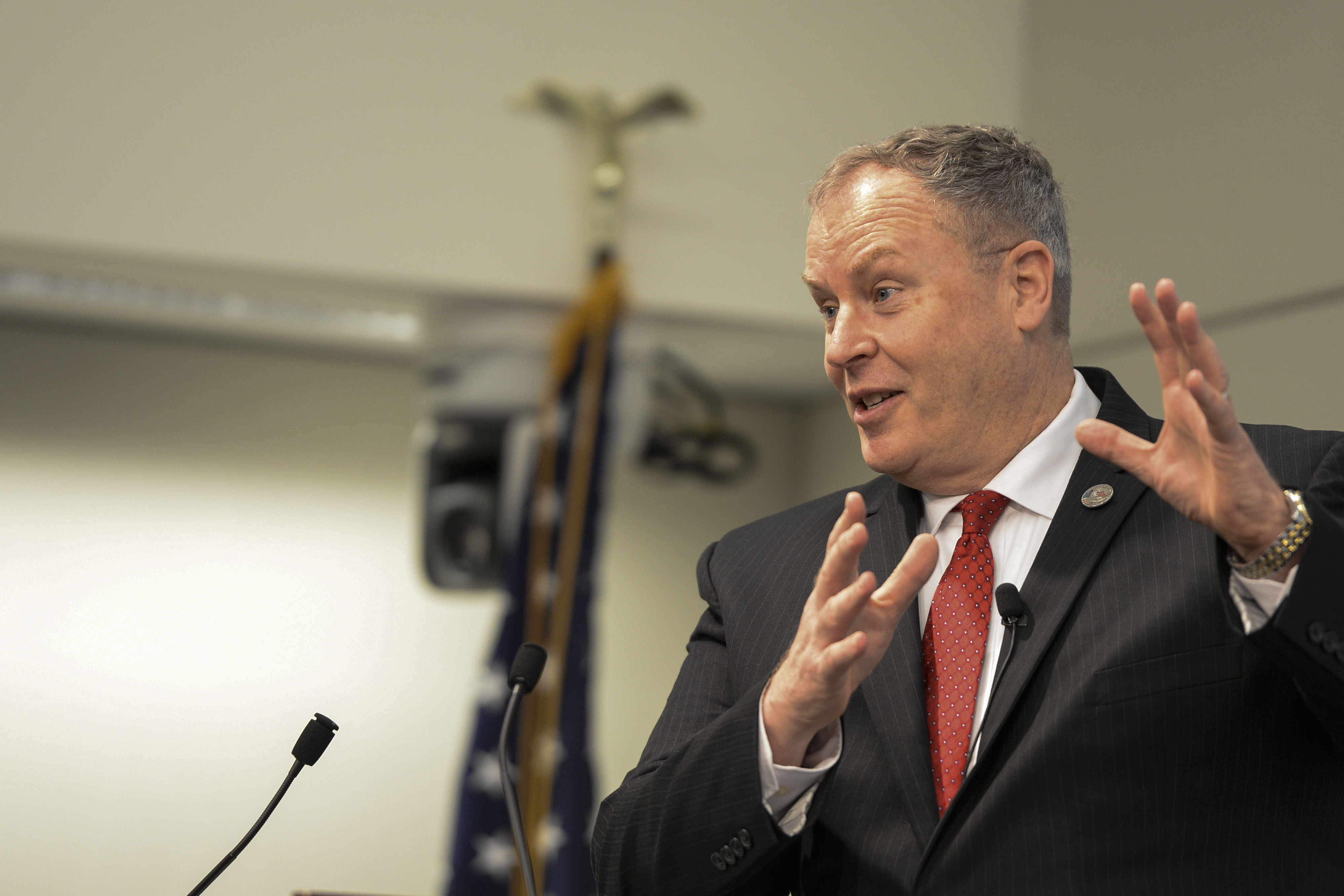 WASHINGTON, D.C. – The Pentagon’s number two civilian said the Fiscal Year (FY) 2016 budget submission will reverse a five year trend in reduced U.S. defense spending and gave hints to key investments in military technology the Defense Department will include in the submission.

The FY 2016 budget submission – due to Congress next week – seeks, “to reverse this decline in defense spending in the past five years,” and make “targeted investments in new technology in those areas we deem to be the highest priority,” Deputy Secretary of Defense Bob Work said on Wednesday at an event sponsored by the Center for a New American Security (CNAS).

Earlier this week, news broke the defense budget is expected to exceed a $499 billion cap placed on it by Congress and come in at around $534 billion in base budget funding along with a $51 billion overseas contingency operations (OCO), according to a report in Defense News.

Work previewed some of the capabilities on the research development and acquisition end the Pentagon will include.

Pentagon leaders have made the case over the last year that the U.S. is losing its technological edge while the military focus of the last 15 years has been on the low-intensity ground conflicts in Iraq and Afghanistan while high-end capabilities have suffered.

In November, outgoing Secretary of Defense Chuck Hagel issued a memo kick off the wide ranging Defense Innovation Initiative to help the technological effort.
Also this year, the Pentagon kicked off an effort – led by Work – to increase the technological daylight between potiential adversaries and the U.S. to create a so-called third offset strategy or strategies.

The new effort will expand from a single type of technolgy and divide the effort between short term and longer term goals.

“We’ll be looking for promising technologies in what we call the FYDP [future years defense plan], generally about five years out. We’ll identify advances that we can hopefully field in the ‘20s and then we’ll plant the seeds for [research and development] that will give us an edge in the ‘30s,” Work said.
“We’re [going to be] constantly updating this strategy rather than to pick the one single unitary field theory that’s going to make [the strategy] work.”

At least part of the effort will examine countering anti-access area denial (A2/AD) strategies seeking to stiff-arm the American ability to enter a battle space.

The U.S. will also look beyond a single adversary – like it did with the Soviet Union – and tailor the effort to the specific threat.

“As applied to Europe, for example, we’re probably going to have a high technology component as well as an innovative whole-of-government concept to counter the ambiguous hybrid threats we saw in Crimea and continue to see in Ukraine today,” Work said.

He also said the Pentagon would have to deal with the complications of integrating commercially developed technology into new systems.

Work also talked about how the rapid change in the global security landscape of 2014 could affect U.S. strategic assumptions in the future.

The rise of the Islamic State in Iraq and Syria (ISIS or ISIL) and Russia’s more aggressive posture since it seized the Crimean region of Ukraine haven’t changed the fundamental underpinnings of U.S. defense strategy, “at least not yet,” the Pentagon’s number two civilian said on Wednesday.

The findings of the 2014 Quadrennial Defense Review (QDR) – the Pentagon’s four-year strategic guidance remained sound as Department of Defense leaders began work this year on the budget submission.
“We started our fall budget review with an important question: did those surprises fundamentally change the assumptions underpinning the 2014 QDR strategy and its force-planning construct to the degree that the strategy must be changed? The short answer is ‘no’ – at least not yet,” Work said.

The 2014 QDR calls for the U.S. to rebalance its forces to the Pacific, maintain a strong presence in Europe and the Middle East, continue a global counter-terrorism effort, maintain alliances and continue with military modernization efforts.

“We believe we can execute the strategy at manageable risk, but with elevated levels of risk in some areas. As we survey the strategic landscape and assessed the adequacy of our strategy, we believe that risks are accumulating over time,” Work said.

“What gives all of us pause is that the military spending of potential competitors is rising while that of our allies is dropping. China’s defense budget has had double digit growth nearly every year over the past decade. And both Russia and China are fielding advanced new weapons and capabilities at an extremely rapid pace,” Work said.