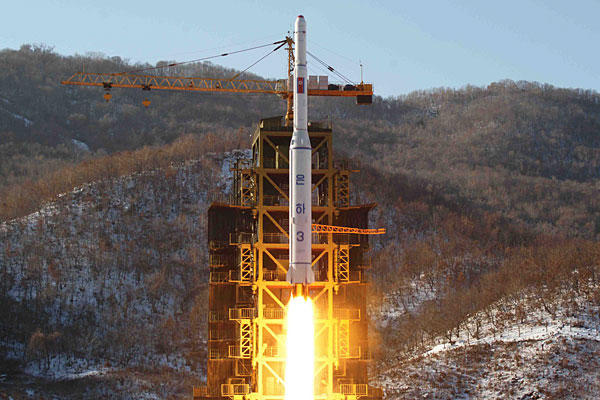 While the United States, Republic of Korea and Japan speak often about the nuclear missile threat posed by North Korea to all three nations, the former commander of the combined forces on the Korean peninsula said the allies may be missing a very real, but less thought about dangers. “The best way to deliver a nuclear weapon to Seoul” could be “a rickety old wooden airplane,” or a drone or a ship pulling into a nearby harbor.

“You don’t need to have a missile” to launch a nuclear attack, said retired Army Gen. B.B. Bell on Tuesday at the Heritage Foundation.

In his address and in answers to questions from the audience, he called on the U.S. to stop publicly pushing the Korean government to allow the installation of the Terminal High Altitude Area Defense [THAAD] ballistic missile defense system on the peninsula and give Seoul time to explain to its people why such a system would be necessary.

“We should respect that,” Bell said.
“We should be giving them some breathing room.”

As to why this is so controversial in Korea, he said it could be a combination of cost, the immediate threat of North Korea’s long-range artillery, fear of worsening relations with China and growing too close to Japan, historically an enemy. “Those are all fair issues.”

But at the same time, he said the U.S. should be stepping up pressure on the Chinese to curb Pyongyang’s nuclear ambitions and threat. “I will 100 percent guarantee that the Chinese will object to THAAD,” he said.

“This is their [Chinese-North Korean] problem” and any installation of a missile defense system or its accompanying X-Band radar to detect missile launches is a deterrence and defensive measure. He noted the same system and radar was proposed for Europe to counter Iran’s nuclear and missile program but is now deferred. “We ought to demand that China rein in North Korea.”

Bell said that as long as North Korea uses its nuclear stockpile as a threat to its neighbors the U.S. should remain in “operational control” of military forces on the Peninsula. Moving operational control from the United States to the Koreans was discussed often in the middle of the presidency of George W. Bush but has gradually simmered down as a front-burner issue.

Complicating the matter is control of nuclear and conventional forces.

“America never cedes national command authority,” he said, noting the same is true of the Koreans and also is true in coalition operations anywhere. “We always reached consensus” of how forces were to be used in Korea. “This what we do today.”

He added, “It’s not about South Korean military capability” or missile defense in deciding current operational control. It is about the nuclear threat posed by North Korea.

As to why high-altitude missile defense, including sea-based SM-3 missiles, is necessary for Korea, Bell cited his own experience during the first Gulf War when Iraqi-launched Scud missiles were landing in Saudi Arabia and Israel within seconds or minutes of being launched. The donning of protective gear, racing to shelter and not knowing whether the missiles carried weapons of mass destruction were things he told the Washington think tank audience that he remembered more than 20 years later.

If the missiles had been carrying nuclear, biological, chemical or radiological weapons, the effects on the ground of destroying them at low altitudes would have been catastrophic, he said.

“Let’s stop screwing around and do what is right” in developing fully interoperable and where necessary integrated missile defense systems on land and at sea for North East Asia. Even if only one missile is fired, Bell said, early in the launch “no one knows where it is going” — possibly Osan Air Base in Korea, a naval installation in Japan or Guam. “No one ally can go it alone.”

Bell said he was confident that Korea and Japan would come to each other’s aid in a crisis but noted that the two have not yet signed mutual security agreements.

He believes the presence of 30,000 American soldiers and airmen primarily in Korea acts as a deterrent and does not see them leaving anytime soon. He also wanted aerial delivered and timed mines kept off the table in future de-mining treaty talks.