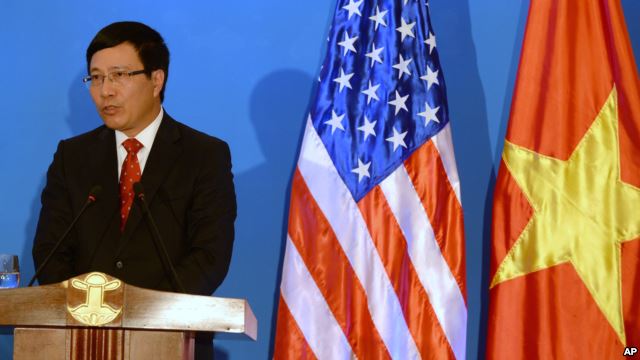 “No two countries have worked harder,” to overcome differences than the United States and Vietnam, said the Southeast Asian country’s deputy prime minister on Wednesday.

Throughout his address at the Center for Strategic and International Studies, a Washington think tank, Pham Binh Minh stressed, “vibrant growth in all area” — trade, people-to-people exchanges and security that allows his nation and the region to grow economically and peacefully Vietname and the U.S. only established diplomatic relations in 1995.

“People could not believe how fast our relationship developed,” he said.
It is relationship that began in an unusual way following a long war — the search for Americans missing in action years after the fighting ended.

What followed was Vietnam’s removal of its troops from Cambodia and the closing of the so-called re-education camps where thousands of supporters of the fallen Saigon government were confined.

But one sticking point in the new relationship has been the executive branch’s embargo on the sale of lethal arms to Vietnam. The ban was imposed primarily on human rights grounds.

Minh called the continuation of the ban, “abnormal” in an address to the Asia Society in New York last week, reported Voice of America.

Chris Borse, a national security adviser to Sen. John McCain (R-Ariz.), said, “The immediate strategic interest [for the two nations] was maritime security” in the region.

Congress is willing to work with the administration on passing a resolution lifting the ban if Vietnam “demonstrates institutional change” that shows the willingness “to eliminate the arbitrary use of power” against political dissidents and reforms its justice system, he said.

Borse and Marciel stressed that lifting the ban was not tied to a specific quid pro quo — if Vietnam frees so many dissidents, some arms can be sold — but instead to broad progress towards greater human rights.

Murray Hiebert, a senior fellow at CSIS and co-author of a new report on the state of relations between the two, said, lifting the arms ban “would be a significant step forward.”

Minh, who has served as Vietnam’s foreign minister since 2011, said the two countries will continue working together on removal of Agent Orange, finding and destroying unexploded ordnance and hunting for the remains of American and Vietnamese missing in the war.

He cited the comprehensive agreement and other recent pacts between the two as important but they do “not hamper our relationships with other countries,” specifically China.

As for territorial disputes with China and other countries over islands in the South China Sea, Minh said, “We develop relationships with all countries” and said what was needed was diplomatic negotiations among all claimants to the territory and not military confrontation.

When he was asked by a Russian news agency reporter about Vietnam’s plans for the development of Cam Ranh Bay — the former home of U.S. and Soviet naval bases in Vietnam— Minh said, “We welcome all assistance. That is not a military port.”