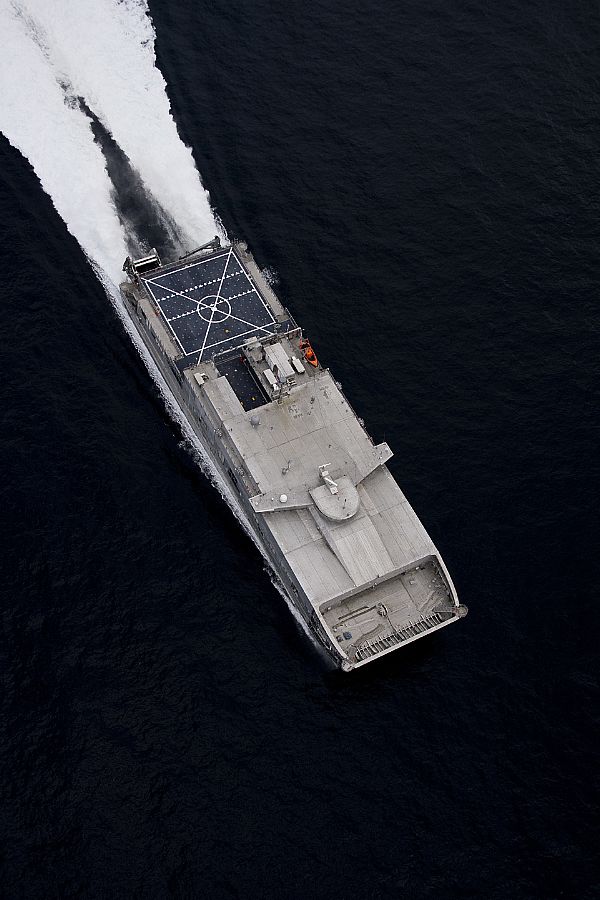 Austal USA has delivered the latest Joint High Speed Vessel (JHSV) to U.S. Military Sealift Command (MSC) in a ceremony in Mobile, Ala. on Monday, according to a statement from U.S. Naval Sea Systems Command (NAVSEA).

USNS Fall River (JHSV-4) is the fourth JHSV delivered to to MSC, following the completion of sea trials in July.

“Today the Navy received a tremendous asset,” said Strategic and Theater Sealift Program Manager Capt. Henry Stevens in the statement.
“The addition of Fall River to the fleet will enhance our forward presence and ability to bolster global security from the sea by quickly transporting significant resources to a wide array of geographic regions throughout the world in time of need.”

The fifth JHSV, Trenton (JHSV-5), will launch in the next few weeks, according to NAVSEA.

JHSV began as a joint Army and Navy Program until the Army left the ten-ship $2.5 billion program.

The aluminum catamarans can transport up to 600 tons of troops and gear. The ships displace 1,515-tons, can cruise at 35 knots at a range of 1,200 nautical miles.

The first ship, USNS Spearhead (JHSV-1) was accepted into service last year and has operated in the Mediterranean Sea. USNS Millinocket (JHSV-3) was part of the Rim of the Pacific 2014 (RIMPAC) exercise.